NPCs in the Dragon Aerie

Be wary of breaking the grayish white dragon eggs in this area. If too many eggs are broken, simply rest at bonfire to reset.

Before you begin, consider exploring this area on your own and taking in the epic scenery and layout. Of all the areas, this one is the most visually stunning. It's also pretty easy to get around and you'll probably have a lot more fun with it just on your own. There's not much you can do wrong as long as you remember the rule above, which doesn't really matter since you'll be using your new feather and the big guys don't respawn.

To Skip or not to Skip

As you enter the area, the path splits in two:

Back to the bonfire. Exit the room on the opposite side and follow the winding path up to another bridge. This bridge is blocked by a petrified statue at the end. So you'll need a Fragrant Branch of Yore to explore further. Once across the bridge, you will find yourself in a cave, and immediately find a Bonfire Ascetic. Around the corner is a Rupturing Hollow -the glowing yellow chest indicates that it is corrosive. 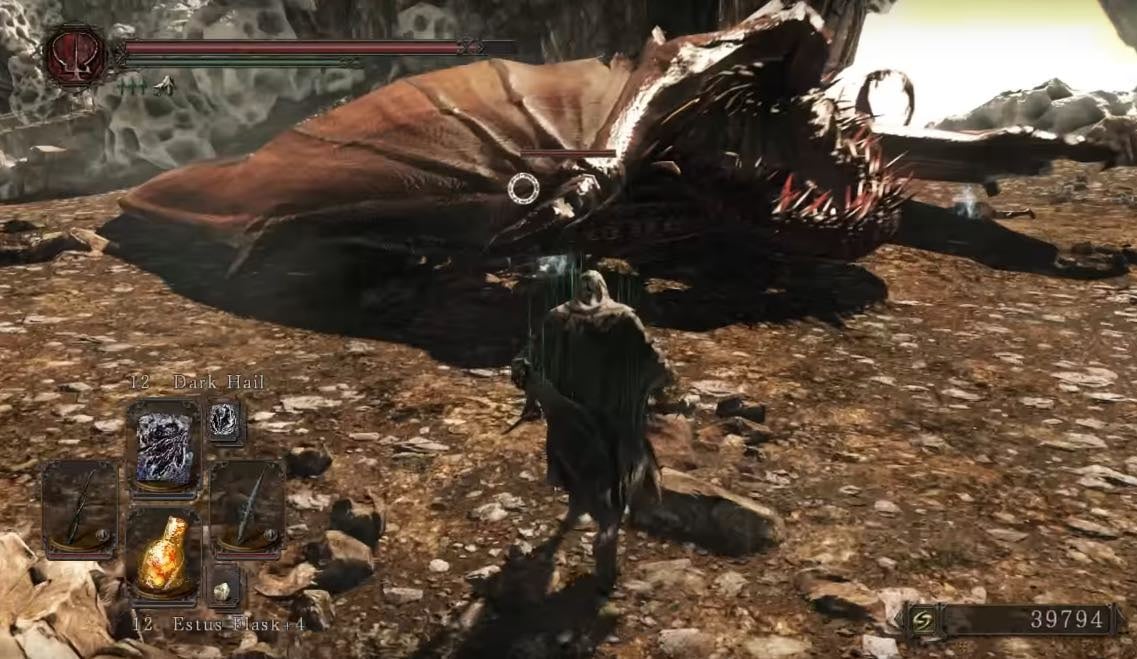 There are two paths, and a recess with a Crystal Lizard and a Radiant Lifegem. The path on the left of the recess leads out to a large area guarded by a Red Dragon. You can dispatch it to enter the proceeding area, and pick up the extensive loot that it was laying on:

There is also a Crystal Lizard on this platform, and another up a ramp to the right, guarded by some Rupturing Hollows. The holes in the floor will drop you back into the cave. To the far left is a bridge looping back round to the path from the right.

Right of the Recess

The path to the right of the recess, leads to a bridge and another fork. You will be invaded by Fencer Sharron when you try to cross it. At the end of the tunnel, you’ll drop down to a walkway. To the right is a bridge leading to the previous open area, off the side of the bridge you’ll notice a corpse with a glowing treasure. You can’t access it yet, as you’ll need to get to the zipline above it. Follow the bridge to the left, and watch out for the Rupturing Hollow just around the corner. Cross the bridge to your right and follow the path up the side of the hill, then continue to the right and smash through the dragon eggs to collect a Petrified Dragon Bone. 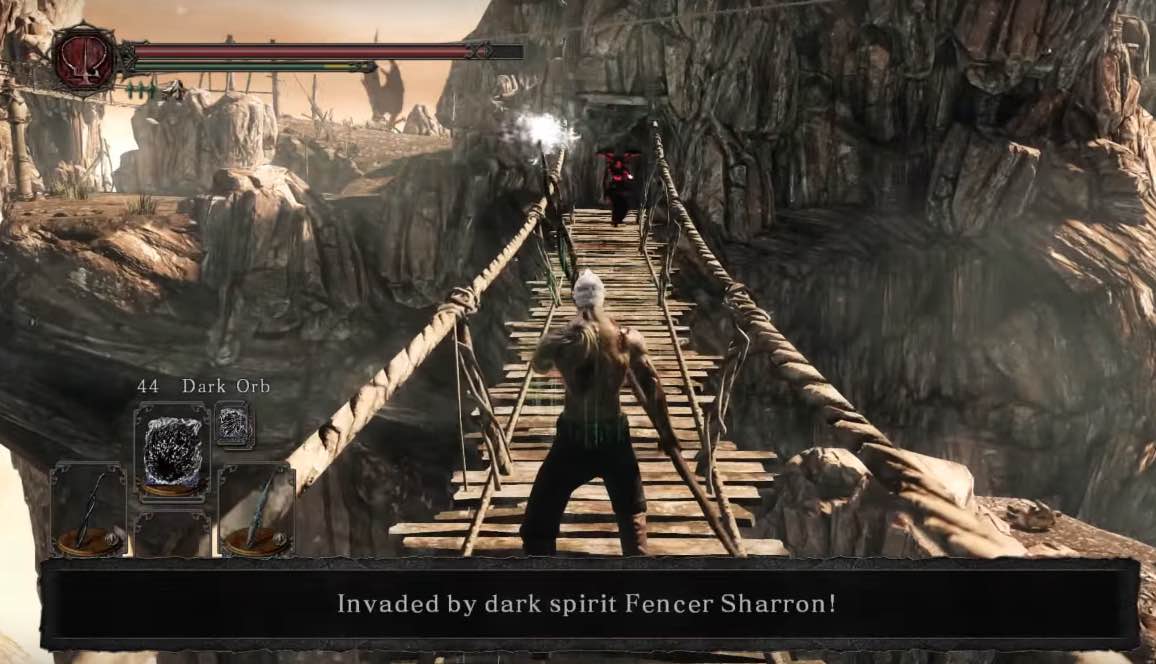 The path splits to the left. A walkway revealing another open area with another Red Dragon, which can also be accessed from the left path. Entering the area will agro the beast so if you've got a strong ranged build, you can simply snipe it from the lower part of the path, or engage in direct combat in the open area. After killing it, it will drop a Petrified Something. In the open area there are a couple of corpses, one holding a Soul of a Great Hero, the other a Large Soul of a Brave Warrior, and another Crystal Lizard.

Again, the path splits into two, the path to the right, leads to a ledge overlooking yet another Red Dragon that you can use to snipe or attack, with spells. This one drops a Twinkling Titanite and a Petrified Something. Once dispatched, drop down on the ledge to the left to loot the treasure, and down to the next ledge on the right for a Crystal Lizard. Corpses in this area hold:

The Bridge to the Shrine

A path to the left blocked by some dragon eggs (smash though them) leads back up to the area where the previous dragon was, to the right is a ledge that you can drop down to, to obtain a Large Soul of a Brave Warrior and a Pharros Lockstone. Homeward Bone or use the Aged feather to go back to the Bonfire and retrace your step to get back to the main path.

Back on the main path, cross the bridge to arrive at the Dragon Shrine. 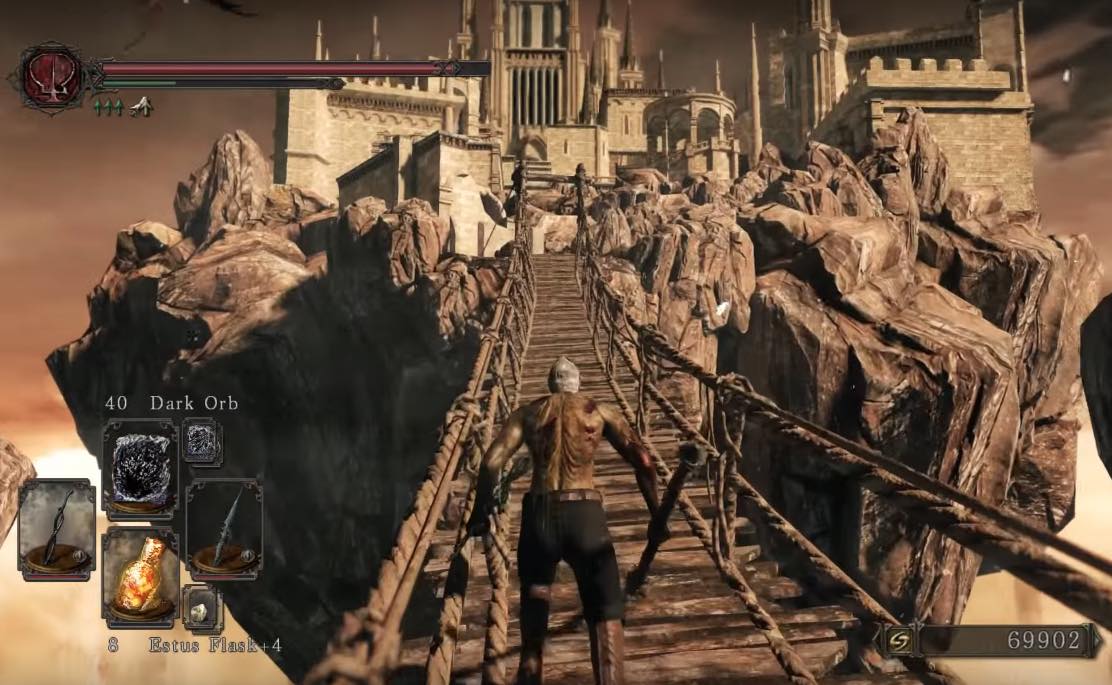 An easy strategy for these drakes is to stay underneath them and go for the legs, similar to the Rat Authority fight or Sif from DaS1. Hanging out by one of the legs will bait the stomp attack pretty consistently, which can easily be completely avoided by simply staying directly underneath and running to the other leg, which you can then hit a few times and rinse/repeat.

Make sure to stay directly under when using this strategy; the stomp attack has a pretty wide tracking arc and can easily one hit you if you try backing off or going behind the drake. If you just stay right under his crotch and run to the inside of his other leg, though, he can't bring the stomp further in and will miss you while you get 3-4 good hits in on the other leg.

They have very little resistance to lightning as well as poison/toxin, even 4-5 regular poison throwing knives is enough to build the poison meter all the way up. Since the second and third drake are in positions where you can see them before they see you, it's a good opportunity to hit them with poison knives/arrows or dark fog/toxic mist depending on your build, to start of at an immediate advantage. It's also possible to poison the second and third drakes from any number of snipe spots and kill them without having to actually fight them at all.

Staying under 70% equip load is highly recommended for this strategy to work. Using a +10 lightning shortbow (upgraded the one found in Iron Keep) with 20STR/22DEX, Iron arrows hit for ~111HP per shot and Magic, Dark and Lightning arrows hit for ~200-250HP.

Using the stay-between-his-legs strategy, two-handing a +2 mundane Santier's Spear (broken) with 19 as the lowest stat and gold pine resin did about 1000 damage for every three R1 presses. If you start off with poison and then hug the legs, the fights should be over very quickly with only dodging needed.