NPCs in the Shrine of Amana

From the Mirror Knight boss fight, head straight to the area with the circular platform ahead. Standing on the crest in the middle will activate it and send you down a long way. However before doing this, hug the short barrier on the left until you can turn into it and make a U-turn on it, to find a chest. This chest contains a Soul Bolt, Spell Quartz Ring +2, and 3x Bonfire Ascetic. At the bottom, proceed through the hole in the wall, and take a right at the torch. Here you'll find a  Green Blossom, inclosed by roots -take your weapon to it, and claim your loot, then head in the other direction. Continue until you reach the Tower of Prayer Bonfire.

From this bonfire, head down the stairs and take the door to your left. Through here you'll notice an item on some branches on your left that you cannot pick up, so break the branches that hold it up, so you can claim it later on. Right ahead you'll find a trail leading to an opening on the right. In here you'll find a chest with 2x Wilted Dusk Herb and Skeptic's Spice, and a Poison Brumer. Head back to the ruined tower, and proceed down the staircase into an area, mainly submerged in water, and find a Large Soul of a Nameless Soldier under the stairs. 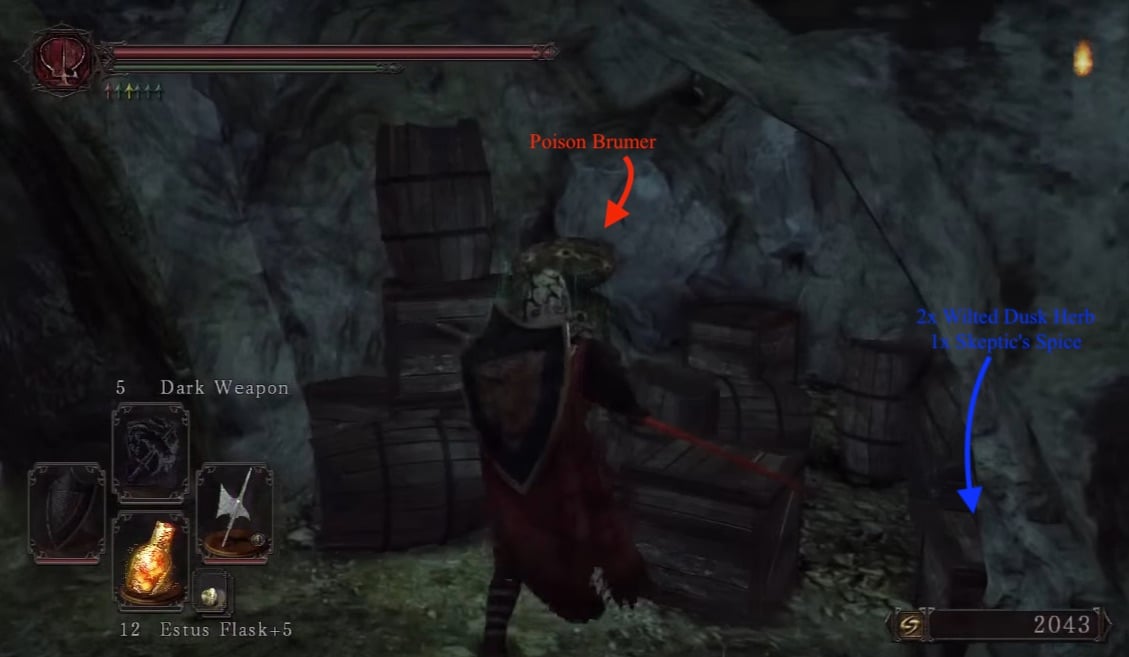 This room, and the coming areas consist of partially submerged, walkable areas. You can walk into the water, but be careful not to fall through the deep pits. While these ledges are tough to see under the water, you can use a torch to see them more clearly; however, the light from the torch will attract any surrounding Amana Aberrations, so try to use Cast Light instead as it does the job without the added trouble.

Upon entering, an Archdrake Pilgrim will attack you from the jump. This entire watery area is also riddled with Amana Aberrations hiding in the water along the rocky trail for the rest of the area. Some noteworthy notes on these enemies:

To the right of the path, you'll notice some rocks sticking out of the water. Go to them and hug them -or use a light source to check where you can walk- and make your way around them to find a Flame Butterfly and a Twinkling Titanite. Head back and notice the left of the rocky path, if you search carefully, you'll find a chest containing Elizabeth Mushroom. More obviously and still on the left, you'll find a small rocky platform holding a corpse with 2x Human Effigy. At the end of this path, you'll find a hut. 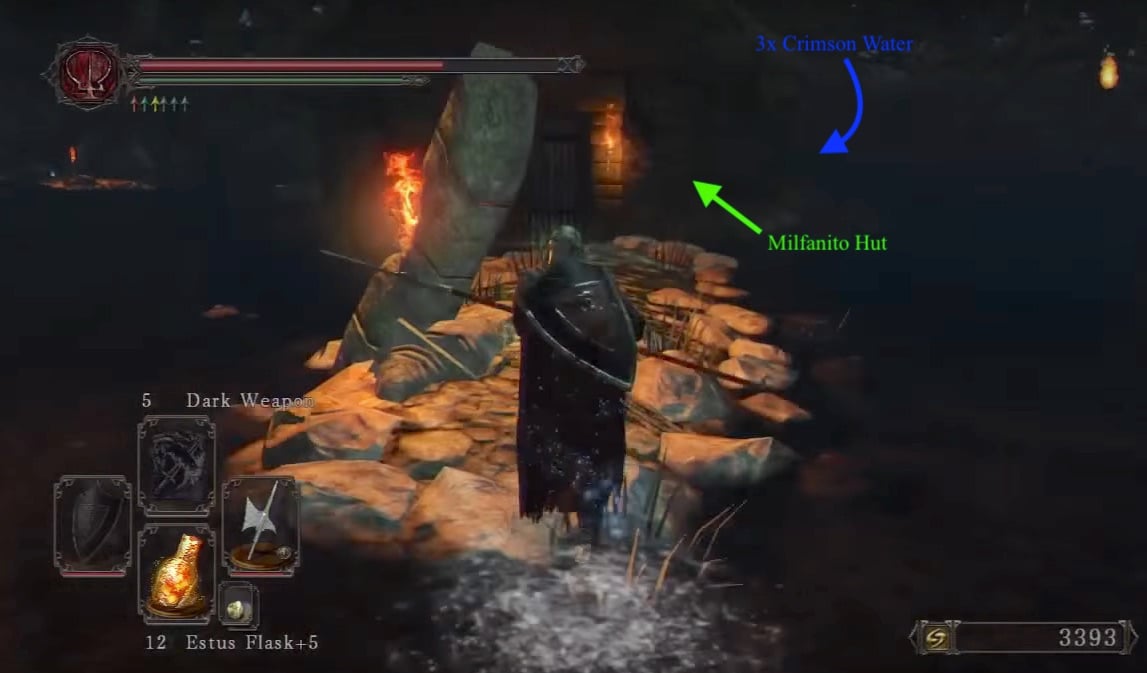 Once you get in close to the hut, the song will stop and any remaining Amana Aberrations will attack you. Inside the hut you will find Milfanito. She will tell you about her sisters, some lore, and will give you a Smooth & Silky Stone, if you exhaust her dialog. If you circle around her hut, you'll find a chest with 3x Crimson Water and some curse jars. However tempting it may seem, do not kill any Milfanito! Antagonizing her or her sisters will revoke your ability to seek help from them to turn you human when you're out of Human Effigies! 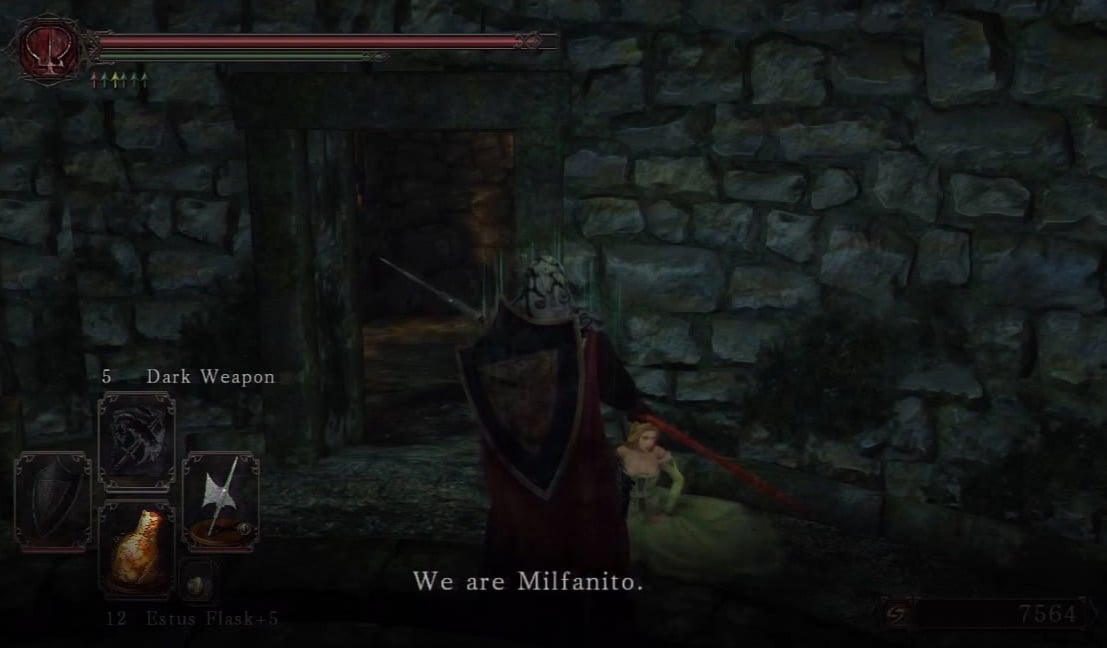 Proceed through the hut and open the door in the back to continue. This path will show several drops, Amana Aberrations, and three Archdrake Pilgrims at the far end of the cavern. Right on the main path, you'll find a total of 2x Soul of a Lost Undead and a Skeptic's Spice, a Large Soul of a Proud Knight and 3x Torch. The Pilgrims mentioned earlier also attack you when you've reached this point. Right at the entrance to the cave, to the left you'll find an Amana Aberration guarding a partially submerged-chest in water, containing a Dragon Charm.

Inside the tunnel, the first cave-room on the left contains four Amana Aberrations and a chest containing a Twinkling Titanite and 3x Smooth & Silky Stone. A lone Poison Brumer will approach you around this mini cave. Come back out to the tunnel you were traversing, and continue until you hit a mist wall. 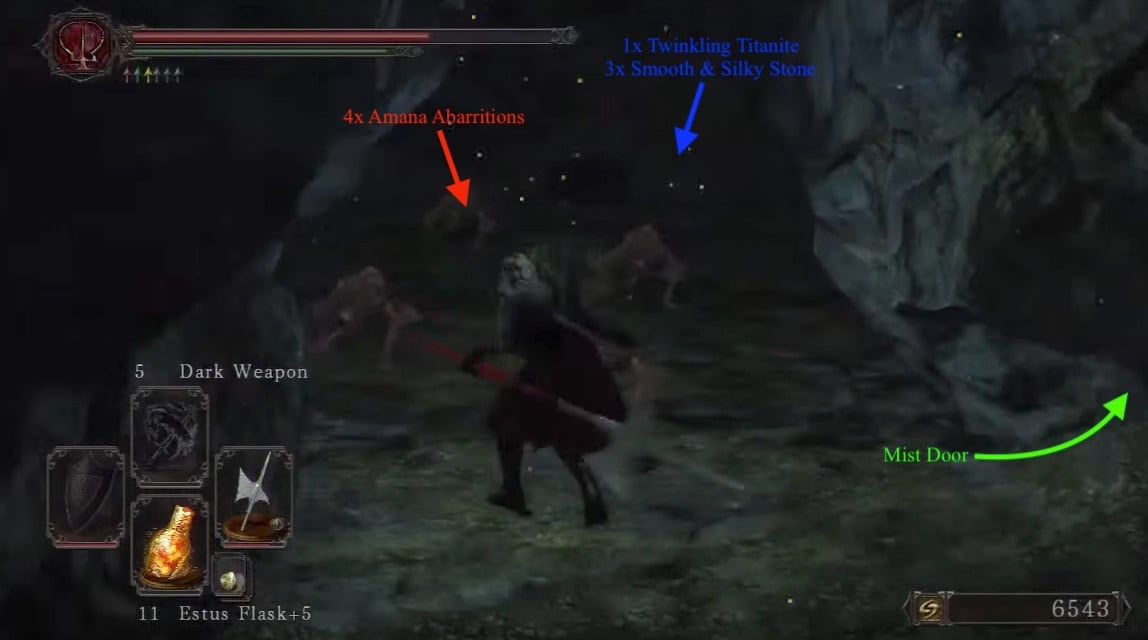 Upon exiting the mist and tunnel, ahead is another similar stone path with the crumbling ruins to your right, providing a second bonfire inside. The smartest move right now is to go and rest at the bonfire since a death here is not so uncommon, and having to traverse the whole area you just did again, would not be ideal.

Back on the path and way down the line is a new enemy type, the Amana Priestess, that will shoot homing soul arrows at you from a long distance which deal a lot of magic damage. They also usually have Amana Aberrations somewhere around them, so be careful when approaching them. Avoid fighting in the water unless it's absolutely necessary, ideally rushing the nearby Priestesses and pulling all the Aberrations onto the stone path before dealing with the further Priestesses. Near the area with the first Amana Priestess, you should notice a ramp leading into the air. Just past it and to the left, near the wall, is a submerged Pharros Lock Contraption. Activate it to reveal a chest containing the Helix Halberd.

After dealing with this, look to the left for a hidden pathway in the water, close to where the third Priestess. Use it to get the cave that holds the Soul of the King and King's Set. While hidden, the path is quite easy to spot as it is a straight path, and is guarded by a DragonRider. The door that separates you from the goodies mentioned earlier, is only unlocked once the optional boss King Vendrick in the Undead Crypt, is killed, and you are in human form. 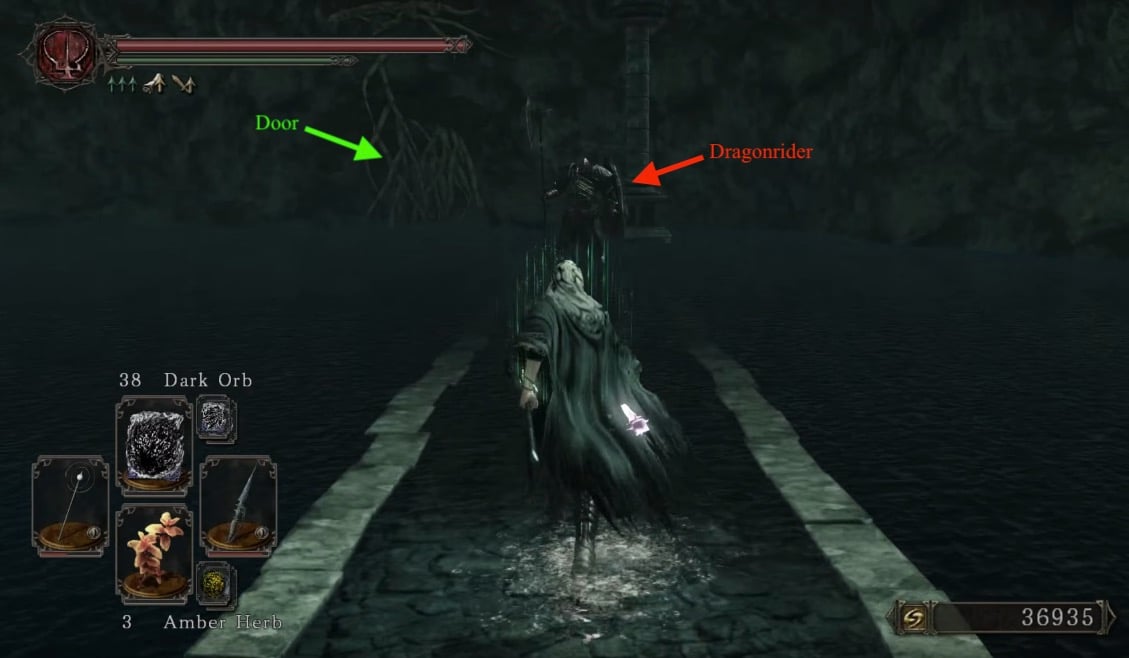 This is Getting Tricky

Once back at the spot of the third Priestess, you should be able to se an item on right as well as another Priestess -this item is a Dragon Charm. Ahead on the right, you will notice a path with a Priestess who may or may not be already attacking you, next to an Ogre. Try to snipe her with a bow from here, then proceed towards the platform she was standing on, killing the Aberration that pops up before dealing with one-eyed shrek there *1. 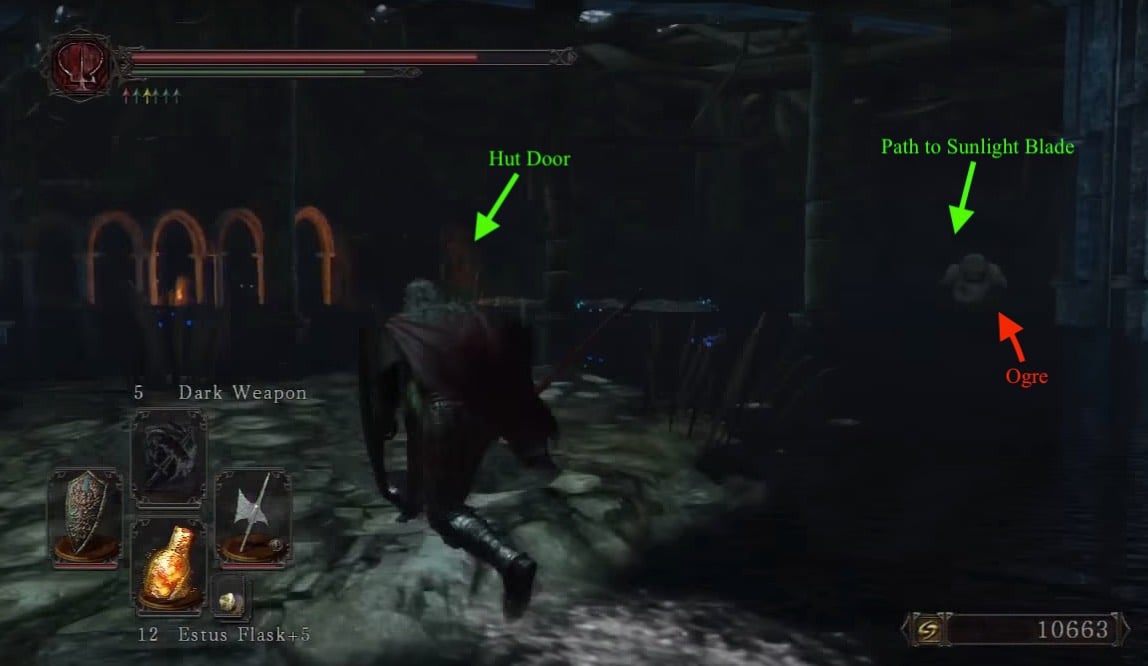 There will also be another Priestess by the upcoming hut that could do with some killing too. Follow the path killing any Aberrations that  jump out, until you reach the second hut. Inside the hut there is an Old Radiant Lifegem, a Large Soul of a Proud Knight, and a summon sign for Felicia the Brave; the summon is quite helpful for the upcoming fight.

Quick Detour (Can be Skipped)

There is another more hidden and dangerous pathway in the water after the Ogre. The pathway is under the columns, is guarded by two Priestesses and a couple of Aberrations, and is very narrow so watch your step. An Estus Flask Shard and the Miracle Sunlight Blade (in the Chest behind the Corpse) is waiting there. Where in other areas you could get away with not using a torch, here it is absolutely vital as the path becomes tricky and not so straightforward; to avoid having to pop a Flame Butterfly every 10 seconds, make sure you get the offensive advantage on the Aberrations and use the pillars to block the damage from the Priestesses.

Once you leave the hut, there will be an Archdrake Pilgrim that will attack immediately. Move to the left, carefully check the right side. There is a hard-to-see chest which contains Fire Tempest. You will not see any messages, as it will be submerged, but sometimes, a prompt will appear on the screen. This lets you know you're getting close. Be aware of the bunch of Cursing Urns around! From the Cursed Urns, if you have your back to the hut, the chest is located a good walk northwest (Seeing as a clock, it would be at about 10-11 hours. Use a torch or Cast Light for better visibility).

After that, going left from the hut, you will find a spot covered by branches. Hack the branches down and kill the Ogre to find a Life Ring +2 and a Singer's Dress. Now head back out and be aware of Amana Aberrations and Archdrake Pilgrims that might pose a melee threat to you. 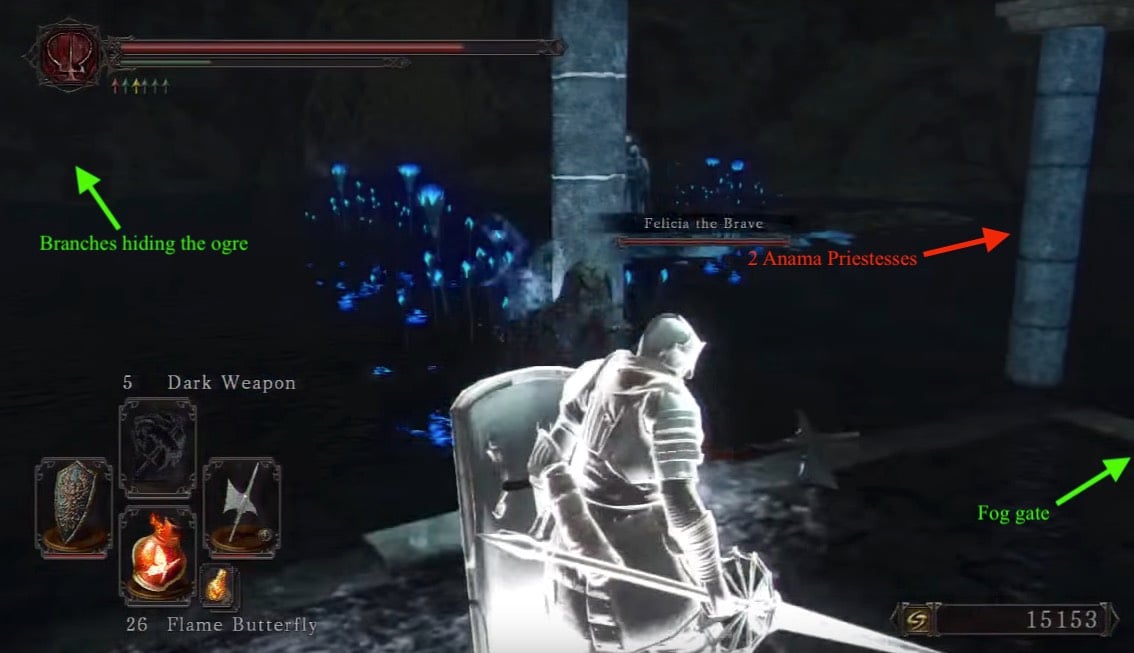 You may notice a fog gate but head to the left side of the area to find another two Priestesses next to a upward-sloping column holding a skeleton with 3x Alluring Skull, at the top. This part might be a little tricky since they always snipe you from a long distance, so use cover. While to the right of the fog gate, is a very thin ledge with a corpse holding a Soul of a Hero and a Divine Blessing -HUG THAT WALL.

Once you have cleared the area, enter the mist into a cavern with a single file line of Poison Brumers and a giant one; deal with them and use Rhoy's Resting Place bonfire on the left. Once you exit the cavern, there will be a Large Soul of a Proud Knight on the right of the exit. There will also be a mix of  Priestesses that will start shooting you from a distance and Archdrake Pilgrims that will attack you as well. Run forward towards the column that has a torch on it and snipe them from behind it. Moving to the right, continuing behind the columns, you will come across a corpse holding Homing Crystal Soulmass. Moving to your left, kill the Amana Aberrations along the way, and Priestesses. Here you should pick up quite a bit of loot, this should include :

Continue forward to another hut and you will be invaded by Peculiar Kindular. Make sure not to have homing soulmass or crystal homing soulmass as it will autolock onto the Mlifanito as an enemy and kill her, as you want to free her. Continue down to face the boss. 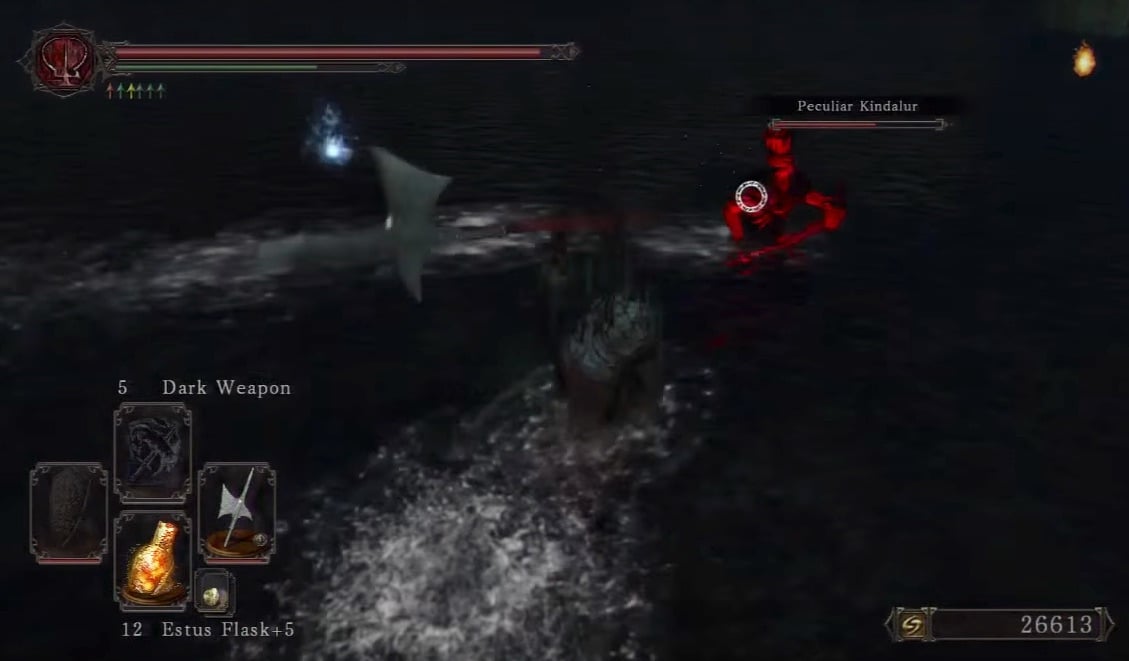 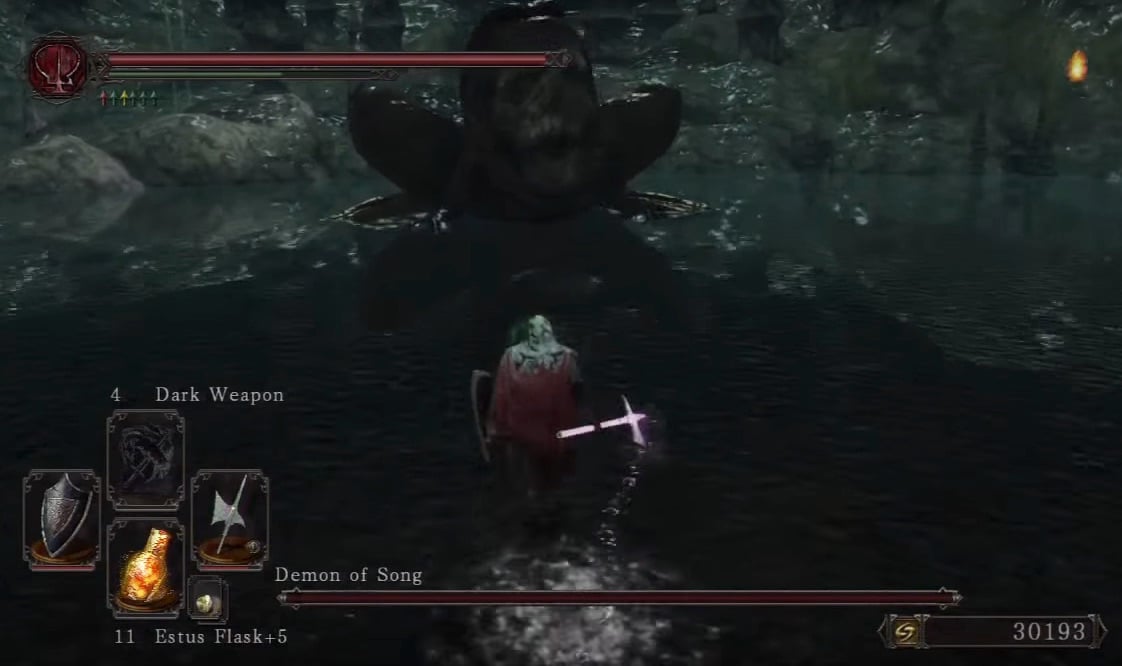 Path to the Crypt

After the boss fight, off to the right when you face the undead crypt door, is a semi-hidden path to a tower. Inside the tower is the Rise of the Dead bonfire, and near to the bonfire entrance is also a chest with 20x Magic Arrows.

At the top of the stairs above the bonfire is a door that can only be opened when you are undead- so if you want access but you're human, kill yourself-, and have talked to all the Milfanito to open it or come back here later. Behind the door are some undead worshippers and Aldia Warlock. Beyond them is the shrine with a Milfanito. Talk to the lady to get rewards, and when you run out of Human Effigies you can revive here using the burning altar as long as you are on good terms. 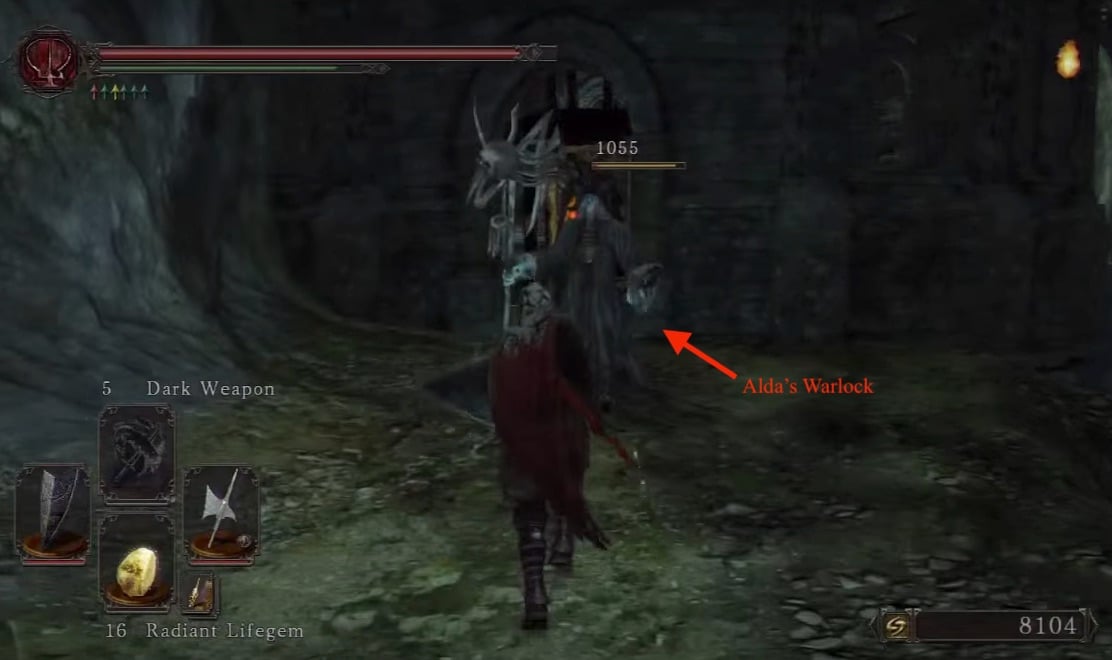 Down the stairs by the altar you will find a Fire Seed in a cave at the bottom guarded by another pyromancer enemy, and outside another pyromancer enemy. On both sides of the staircase are chests, one with the Manslayer katana and on the opposite side is a ledge that leads to a chest containing a Bonfire Ascetic. Careful though, as the ledge is quite thin.

Now , go back to the previous bonfire, then lead your way back to the big door ahead, guarded by a Syan Knight. There's an elevator that will get you to Undead Crypt.