After the opening cinematic, you find yourself under a stone gazebo surrounded by grass as a deprived undead. As you walk forward, and between the two rocks, you come up to another grassland where there are Prowler Hounds running quickly around. They do not attack you and tend to flee as you come near. They will attempt to remain hidden in the tall grass and will not follow to areas in which they're exposed. They will retaliate if you attack however, and drop 30 souls when killed. Instead of going straight ahead, hug the right mountain wall to the right in this area to find an arch of stone. Walking through this leads to a cliff area where you can find a corpse holding the first item of your playthrough: a Rusted Coin. 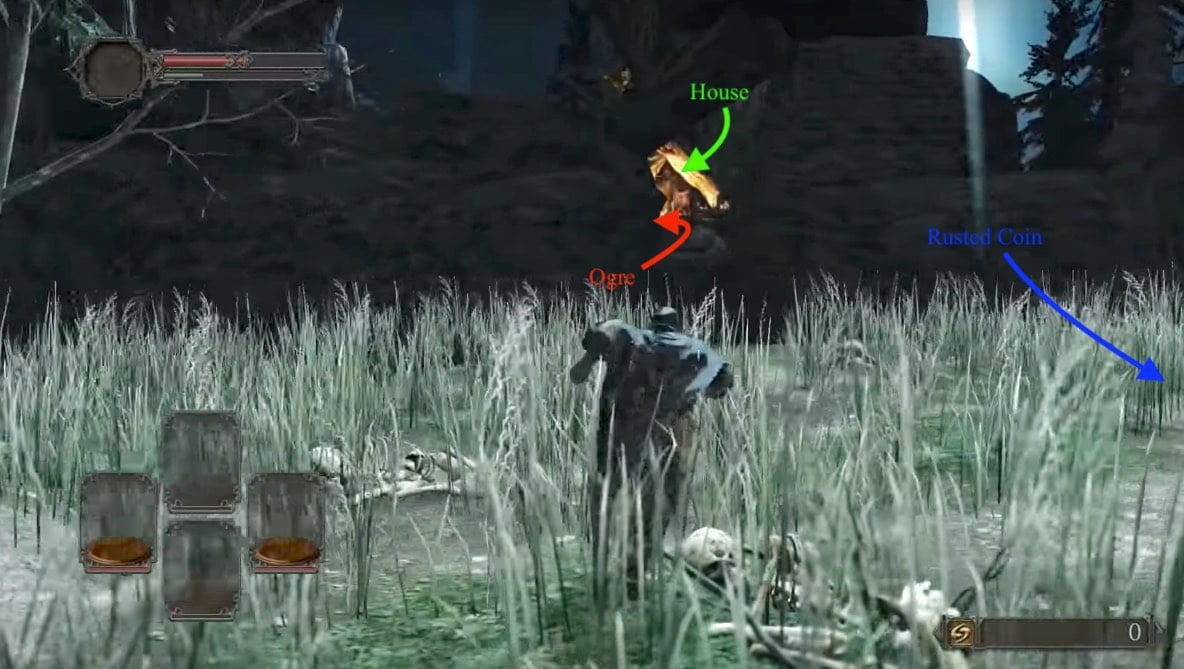 Head back and continue straight towards the big doors at the end, hugging the left side of the mountain. You'll notice a break, covered in bush, right before the wooden bridge. Head into it and follow the footprints to a pathway where you will find an Ogre (drops Stone Ring) guarding a corpse, holding a Gold Pine Resin. Since you have just started and are defenseless at this point, you won't be able to claim the Ring. However, aggroing and luring the Ogre a far enough distance away, will allow you to pick up the loot on the body, which can come in very handy in the not-so-distant future. Continuing along this path leads to a smaller wooden bridge crossing a stream. Cross it, and drop down to find a set of doors ahead on the left, and a bridge on your right. For now, look for the bushes in between yourself and the bridge and pass through it to reveal a path under the waterfall with a Smooth & Silky Stone.

Head back up, and into the house to trigger a cutscene with the three firekeepers. The cut-scene ends with you being asked your name, and upon entering a name for your character, another cut-scene occurs where you are given a Human Effigy. After her allusion to the effigy resembling you, you are then brought to the character creation screen and completing it earns the trophy/achievement Self Recollection. After character creation you start off in the main room of the house with your starting gear and gift equipped. There are four women present, three elderly and one younger, named Milibeth. Speaking with the younger one will shed some insight into the lore. Two of the fire keepers alternate between laughing and silence when spoken to. One of them seated at the table tells you to go on your journey and invites you back. Her implication of clean slate is in reference to the Soul Vessel which you will discover later. If you go up the stairs, you'll find a chest with a Human Effigy. 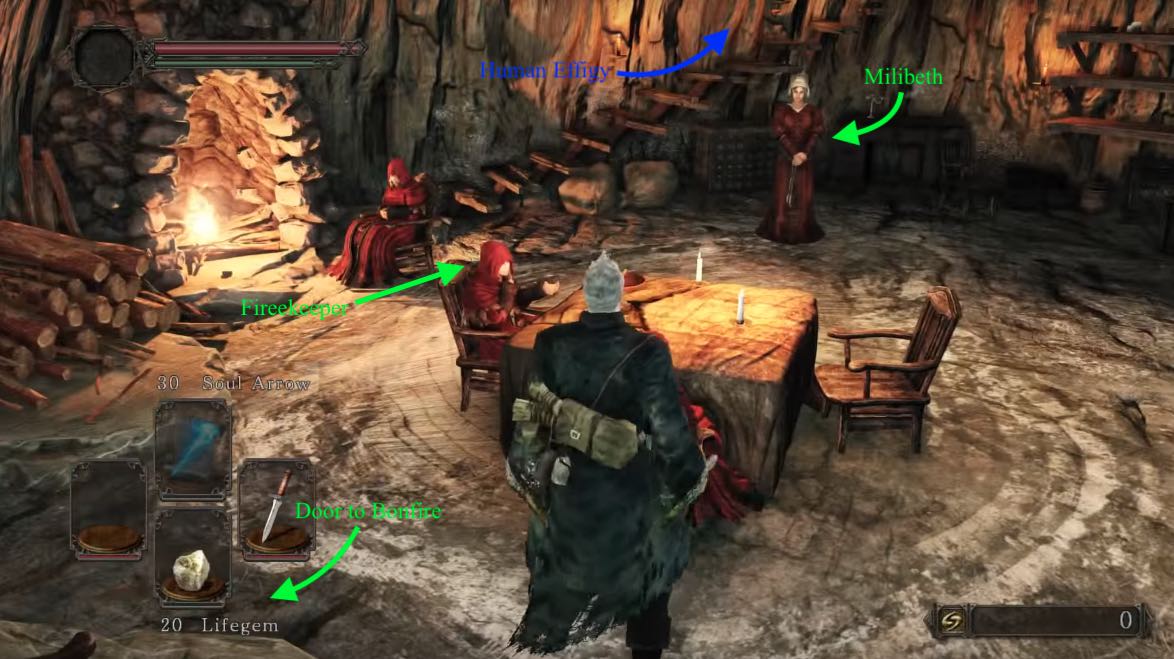 Walking out the door, you encounter a stone sign and a bonfire to the left. To the right of the door there is a cart hiding a corpse behind it. Break the cart to claim a Soul of a Lost Undead and a Torch. Lighting and sitting at the bonfire brings up the bonfire menu, where you can initiate travel, attune Spells, Burn items, and access the Item Box. Toggling at a bonfire will allow you to use a torch, which in turn can be used to light sconces later in the level.

Go through the wooded tunnel straight ahead from the house and you come to a path with several mists on either side. The player can choose to enter the mists at this time which provides access to the game's tutorial. Each mist leads to a tunnel with several lessons inscribed in stone for the player to practice: 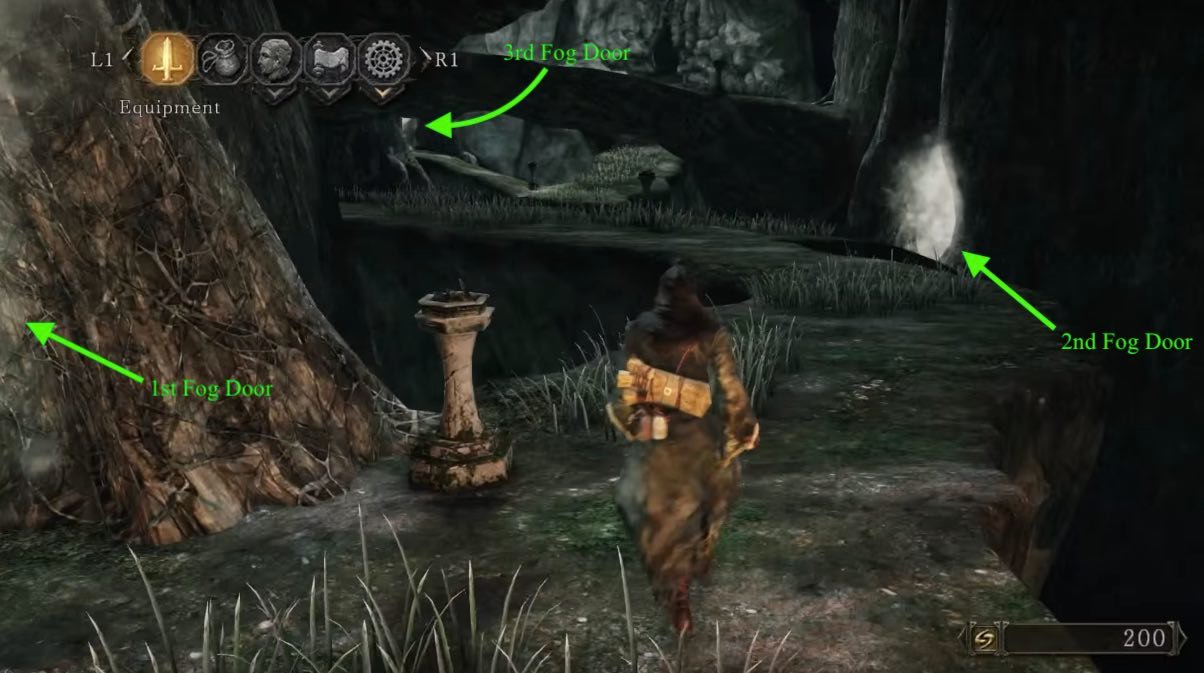 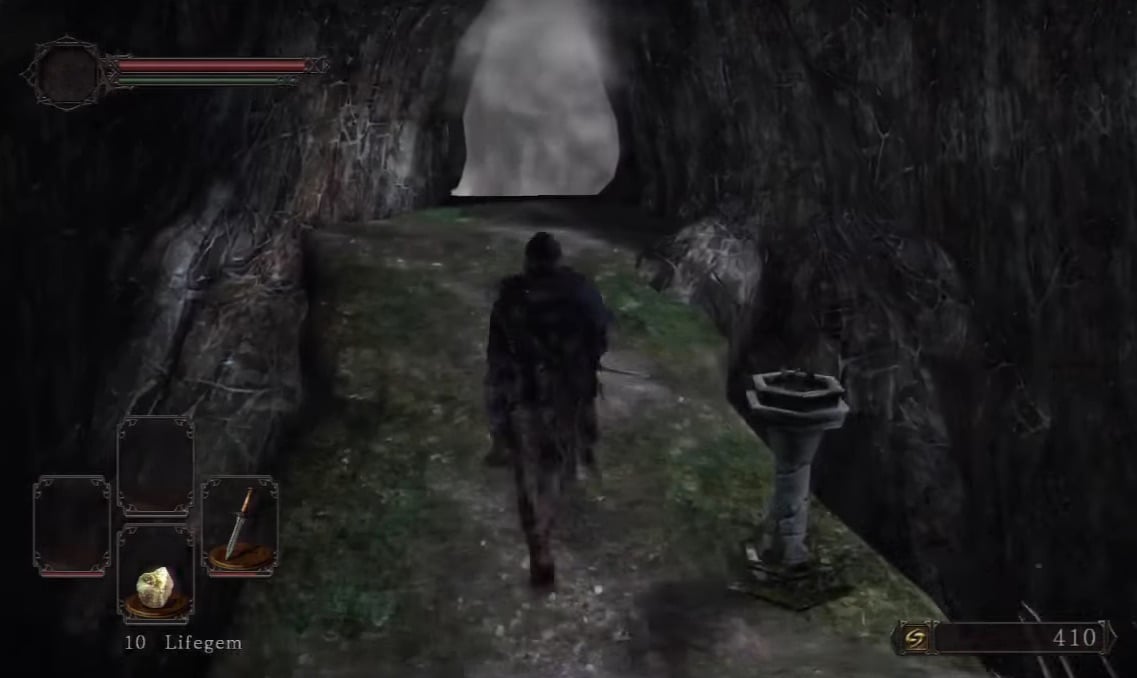 The only thing of note on the beach is a coffin that is partially submerged. Examining this coffin prompts the character to enter inside. The game cuts to a loading screen and when it returns you exit the coffin. With one small difference. Your character has now changed gender.

Prior to 1.04 update, it didn't show any message telling your gender was changed, after update, it leaves a message "The nature of your being has changed".

Once back on the main path continue on and you will come to the oceanside hub town of Majula.