From a lore perspective, the Dark Chasm of Old appears to be the same area associated with Oolacile and Manus from the "Artorias of the Abyss" expansion in the original Dark Souls. Following the hints provided in the story, the Dark created from the destruction of Manus became fragmented and separated, slowly crystallizing into new creatures of the Dark. The Dark Chasm of Old reunites the player with powerful warriors from Dark Souls who (presumably) succumbed to the Dark and have been reborn in the Dark Chasm from their dark soul fragments. The player traverses Dark Chasm and defeats these Dark creatures (and brings fire back to the Dark) to awaken and strengthen the dark soul inside of him or her.

While the Dark Chasm of Old sites can be accessed in any order, there appears to be a progression in terms of the difficulty of the enemy phantoms, with easiest to hardest in the following order: Shaded Ruins, Black Gulch, and Drangleic Castle.

The Dark Chasm of Old is part of the Pilgrims of Dark covenant quests, and is only accessible to covenant members. After joining the covenant, the player can speak to Darkdiver Grandahl in any of his three locations and offer him a Human Effigy to open a portal into a Dark Chasm of Old.

The goal of each Chasm is to defeat all enemies and invading players, light the sconce, and exit through the hole at the end without dying. Once the sconce in each Dark Chasm has been lit, attempting to exit the chasm normally will instead lead to the Darklurker boss. Once you have completed all three areas, any of the three will allow you access to the Darklurker boss. However, you must recomplete the area in order to do so.

Entering each Dark Chasm requires you to find Darkdiver Grandahl in the respective areas.

The Dark Chasm of Old in the Shaded Ruins contains four enemies. One of each appear in the first open area, along with the cauldron: 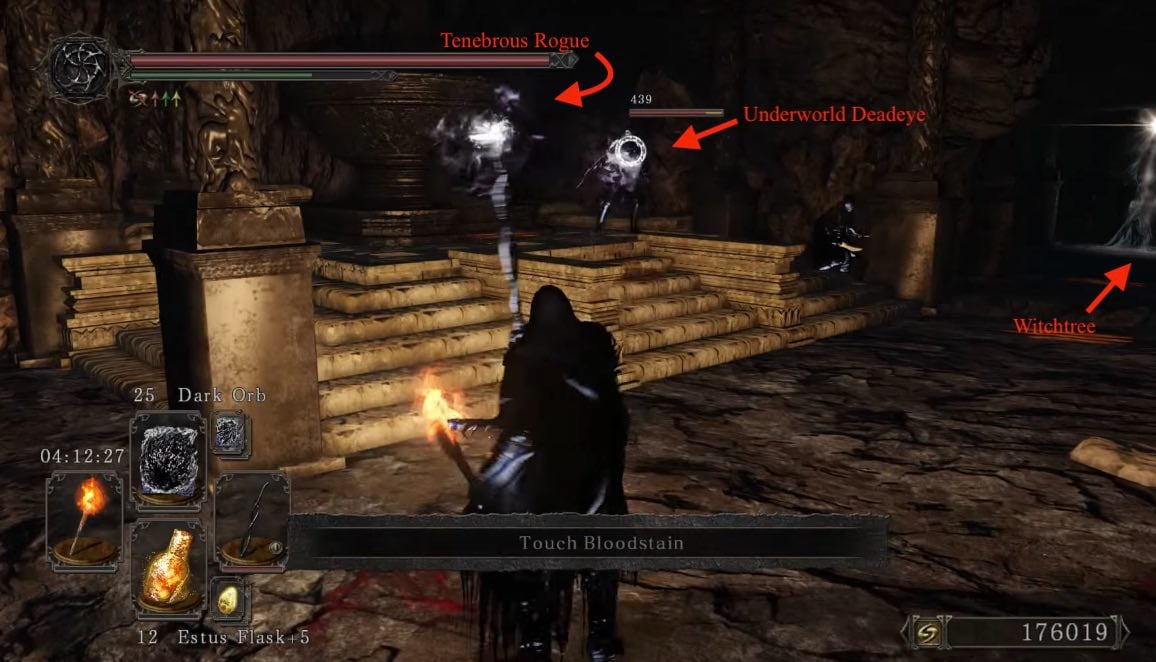 After lighting the cauldron, there is a lift at the back, leading down to another open area with a second Tenebrous Rogue. The same strategy applies here as well. After defeating her, the fog gate will appear. You can jump into the foggy pit at the end, which will either transport you back to the Dark portal or will take you to Darklurker (depending on your progress).

The Dark Chasm of Old in the Black Gulch contains six enemies:

An alternate strategy is to just cast Profound Still, which will block off both Xanthous and the Witchtree ability to cast spells, making them much easier to deal with. Don't forget to turn left in the hallway just after this room and light the cauldron, but watch out for the giant hole in front of it. Follow the wall on the right to safely bypass it.

The second area contains another Ironclad, a Xanthous, and a Witchtree Spirit (staff), with the same strategy applicable: bait the Ironclad out first, then repeat whatever you did to kill King Jeremiah the last time. Since this Witchtree casts sorceries instead of miracles, you won't have to worry about water increasing the damage of its spells. After dispatching them, jump into the foggy pit at the end to either exit the dungeon or challenge the Darklurker, depending on your progress.

The Dark Chasm of Old in Drangleic Castle starting area requires some caution, as it is easy to accidentally walk off a ledge and die; using either a torch or the Cast Light sorcery will make the path much easier to see. It contains four enemies: 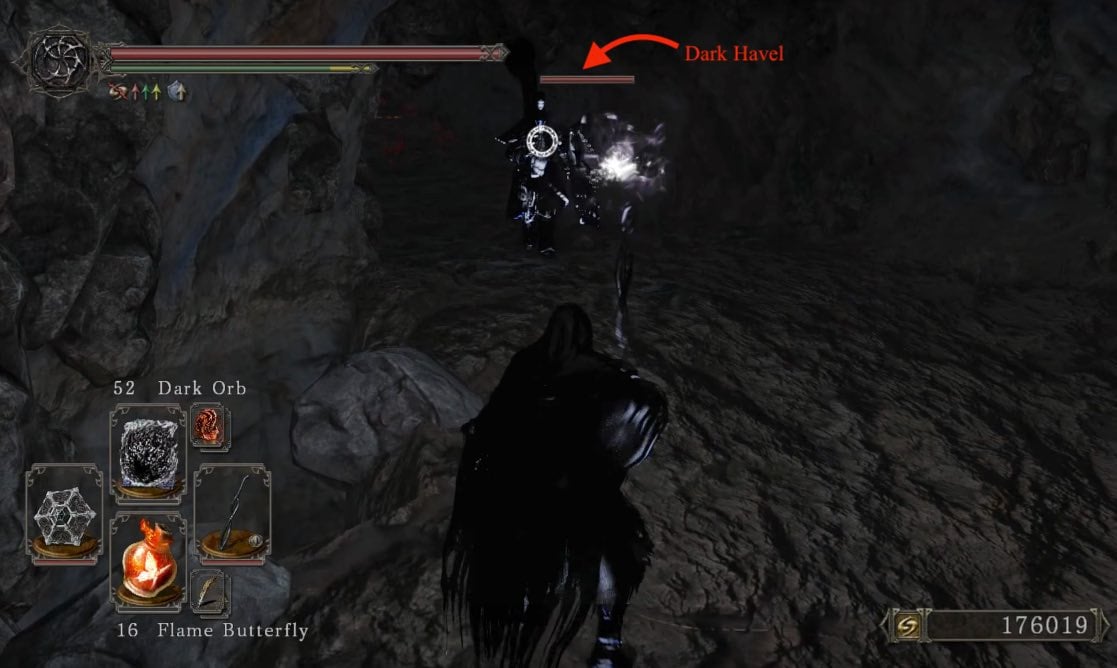 After you've lit the scone in each of the three Dark Chasms, attempting to leave a Dark Chasm through the foggy pit will cause you to enter the Darklurker's boss room instead. See the Darklurker page for more information on this boss, along with strategies for defeating it. After defeating it, you'll be able to exit through another hole and return to the surface. 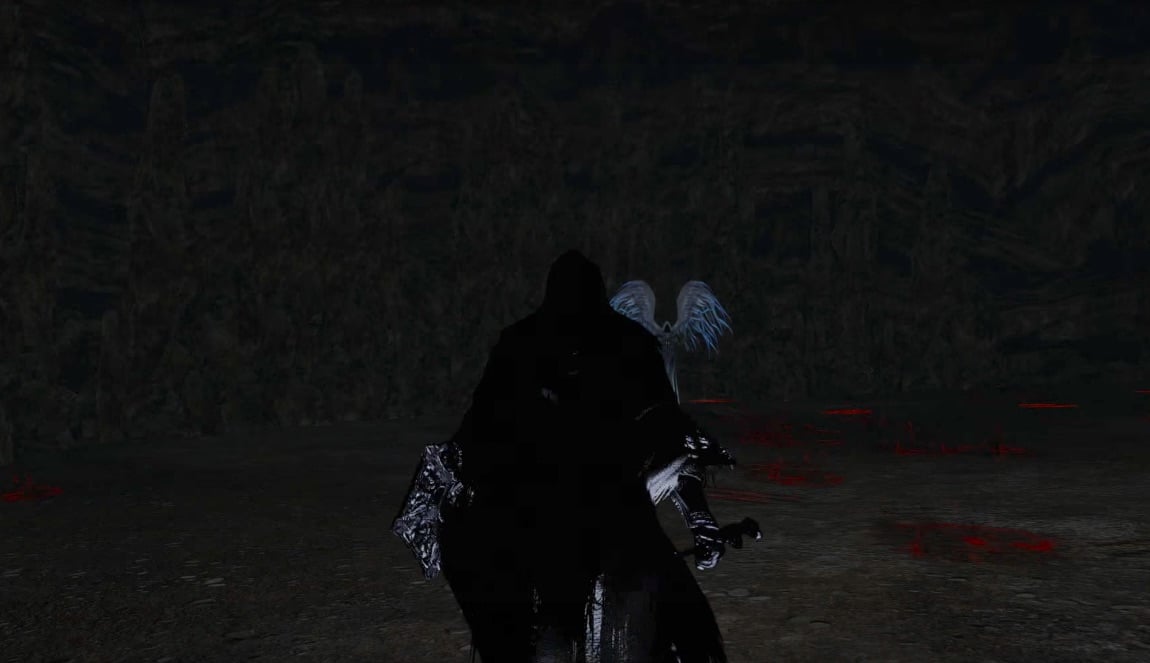 If you use a Cracked Red Eye Orb while in a Dark Chasm of Old, you will invade another player who is in any of the three Dark Chasms as an abyss spirit. If you use a Red Sign Soapstone, your red sign will appear in other player's worlds exactly where you left it, and they can use your red sign to summon you as an abyss spirit. There is a rumor that the red sign soapstone will allow you to automatically invade players in the dark chasms similar to the Looking Glass Knight; this is false.

Aside from causing you to invade as an abyss spirit instead of a dark spirit, the red sign soapstone does not function any differently than normal. Defeating another player while in a Dark Chasm of Old (either as a host or as an invader) will award you with a Bonfire Ascetic. Since other players drop Bonfire Ascetics 100% of the time, this can be a very fast and effective way to farm for Bonfire Ascetics, provided you have Cracked Red Eye Orbs or a Red Sign Soapstone. Killing players as an abyss spirit does not give you sin.

Note: invading and killing invaders has no bearing on covenant rank, but the Dark Chasm must be completely cleared of enemies and invaders before the host can progress through the area. Invaders basically act as additional enemy phantoms for the host to overcome.

Dark Chasms of Old Invasion vs Other Invasions: