NPCs in the Undead Crypt

From the elevator from Shrine of Amana, proceed forward into a room with a staircase, and the 'Undead Crypt Entrance Bonfire' right ahead. Trying to ignite it the first time will cause an explosion and Aldia, the Scholar of the First Sin erupt from the ground. Exhaust his dialogue for some saucy lore and to send him back down, this makes the bonfire available to light, only for realsies this time. On the right of the stairs is a corpse with a Radiant Lifegem. 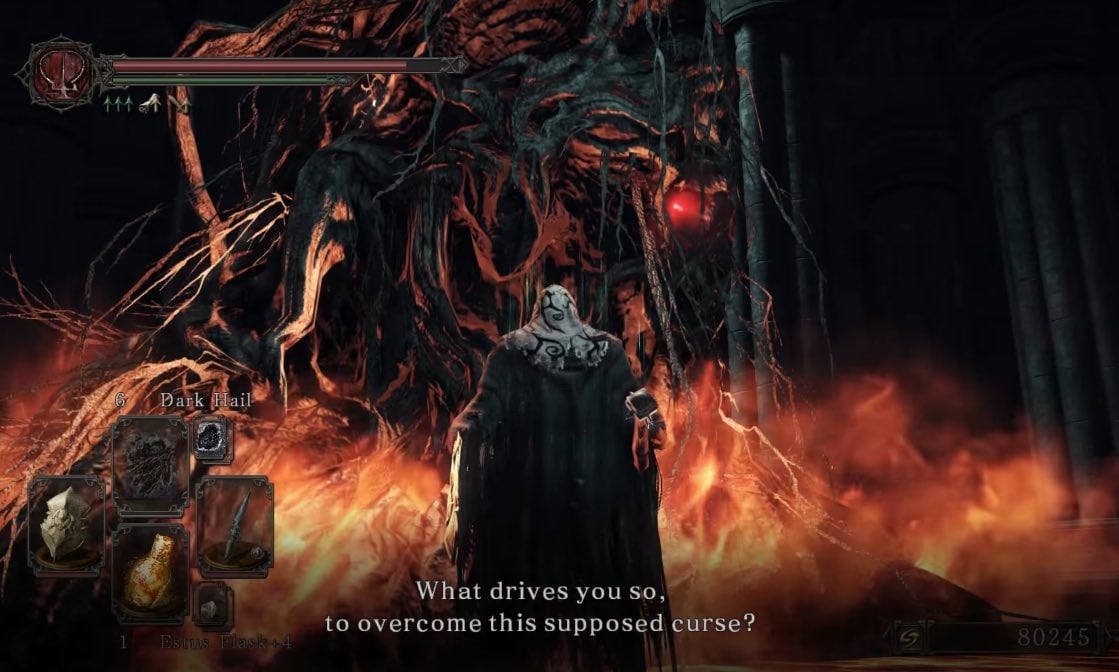 Head up the stairs to enter a room with two Syan Soldiers. After taking care of them, you can enter a room with a non-hostile Torch Hollow that will simply follow you, and an Imperious Knight that blocks the entrance to the next door. Inside this room are a few Hollows and 2 Leydia Witches, who can cast hexes and miracles.

Going through the doorway and up the short steps then again through a thin corridor. Upon exiting the corridor, you are told to halt and not produce light by Grave Warden Agdayne, who stands on top above a walkway. Get to him by taking the stairs on the right, past his Guards line the approach to him but do not attack until provoked -you can attack them without aggroing Agdayne, after you've talked to him. Any form of torch lighting here makes him hostile, including letting the Torch Hollow from the first room follow you. There is a corpse near him with a Large Soul of a Nameless Soldier. Exhausting Agdayne's dialogue gives you a good chunk of lore, allows you to learn the gesture 'Have Mercy!', and also becomes a merchant who sells some useful wares.

Head back down the staircase and through the doorway on your right. Before proceeding up stairs to the right, you'll want to drop off the left. This brings you down to a small area in which two Hollows will attack you.You can also loot a Simpleton's Spice and a Soul of a Great Hero. Continue to the end of this short hallway to find a ladder leading up to where you'll encounter another Hollow and an iron chest with a Crushed Eye Orb and a Fire Seed; a Ghost will attack when you're midway up the ladder. Drop down to land on the walkway at the top of the stairs you ignored earlier with a sconce, then a mist. If you light the sconce, an invader will spawn a few meters from you.

When you arrive at the mist door, if you drop down to the left, it leads to an Imperious Knight guarding a Soul Vessel. From down here, simply go up a ladder to enter the bonfire that is located just to the left, past the mist door. In this area, where you first drop down, before you reach the Soul Vessel, there is a small statue of a woman that if you light with your torch will illuminate the area greatly BUT it will also spawn around 6 non-respawning Insolent Spirits in the level so think twice. Approaching the statue on right spawns Leydia Pyromancers, while several Hollows lurk about this room regardless. Destroying the statues stops the Pyromancers from spawning. Nearby around the corner is a room with the Undead Ditch bonfire.

A corpse with a Titanite Chunk and Petrified Dragon Bone in corner behind, and a ladder nearby leads up to a walkway where a Leydia Witch stands in front of a chest. The chest contains Dried Fingers, a Bonfire Ascetic and a Twinkling Titanite. Head back down the ladder to the prior room. To the left, find a Simpleton's Spice and 2x Black Firebomb then proceed to the right to go into the room in Section 4.

Entering into the next room, destroy statue that summons the Pyromancers, and once again, be wary of the Hollows as well. In the room, you'll find a corpse with a Soul of Lost Undead, and around the corner from it, you will find a Bracing Knuckle Ring +2. Continue into the next open room to trigger the Nameless Usurper invasion; be wary of the Ghosts here as well. Upon clearing the room, loot the corpse with the Divine Blessing and Soul of Nameless Hero. There is an illusory wall to right with 2 more of these wall-Ghosts, including one who guards the iron chest in the room. Kill them and loot the chest for the Avelyn and 15x Heavy Bolt.

Continue down the candlelit hallway, with three more wall-Ghosts, to find a blockade created by two Imperious Knights. Defeat them then continue to the big hole in the floor behind them, and before jumping down, try hitting the statue left of the skeleton.

The next room is tricky. With the corridor you came from in your back:

Boss of the Aegis

Beneath stairs is a hallway with a Hollow and a bell. Kill it without ringing the bell, then camp it until you kill two more Hollows that will attempt to activate the bell; the second will come from the left side, and after, the third one spawning next to the bell. Now that spawning Pyromancers are not a threat, proceed to the corner opposite to the bell to kill the Ghost dropping another Small Smooth & Silky Stone. If the bell is rung, the Pyromancers -that spawn by the pillars ahead- can be picked off with a bow from afar.

Past them are 2 Royal Knights and a non-respawning Dragonrider. There are two chests on each side of the fog gate:

When ready, step through the mist to face the boss.

After the boss is defeated, the doorway straight ahead leads to King Vendrick. Don't worry, the first time you pass him, he's content with walking in circles and will not retaliate until after the first few hits you get on him. Go down and around him to the item on the other side of the room. This is the King's Ring; now you can go in search of Giant souls to weaken Vendrick, unless you prefer to do so now with his 32x defense stats -yeah, we wouldn't eaither.

After you kill Velstadt, come back to this room with a good number of long range spells or arrows. Arrows work better for this purpose it is easier to aim, Do not kill the zombie that rings the bell in the previous area. Now run everything. The only ones that might follow you into the boss room is the knights, but they do not respawn. You can stand in the boss room and pick off the respawning Leydia Pyromancers for 750 souls each.

You can kill them with good arrows in 2-4 shots, they also drop pretty good items -you may want to equip gear that helps with your item discovery. If they stop respawning you can burn a bonfire ascetic, and will be harder to defeat but will also come better with drops.

If you're having a lot of PVP or you are using small white sign soapstone to farm Smooth and Silkies or souls here, exercise caution in this room since invaders will use the bell to summon spectres and make an easy kill out of you while you're in the middle of the enemy horde/spell storm.