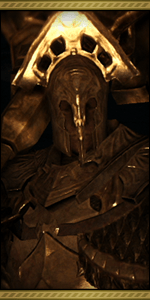 A knight wielding a great metal hammer, who defends King Vendrick's tomb inside the Undead Crypt...
This boss battle makes reference of the knight protecting Maiden Astrea in Demon's Souls, called Garl Vinland, he wears a similar helmet and has a massive hammer as Vinland did, plus his mission is to protect the King no matter where the king was heading to.

Grave Warden Agdayne can be summoned for this fight, provided the player exhausts his dialogue near the entrance to the Undead Crypt. His summon sign can be found along the left wall, behind the row of square altars.

Devotee Scarlett can also be summoned for this fight; she's behind a pillar all the way back in the room with two Dark Witches after the first Imperious Knight (SotFS only).

He has two phases. First phase he primarily uses melee. For this either block or strafe around to the sides of him. At about 50% health he switches to his second phase and uses magic. In the second phase he uses long cast time attacks, denoted by a dark purple clouds. When they are used run up to him and pummel him.

Take note when I fought him I was at SL 127 using a +10 Heide Sword and the Vengarl+1 set with my Stamina at 123 and using the Drangleic Shield+1.
Soon as the fight begins keep your shield up and get close to him and keep circling to the right. After he swings his mace you can get in 2-4 hits keeping just enough stamina to block a counter-attack. Once his health drops to roughly 50% and he ups his dark resistance. Keep enough of a distance from his that he prepares to fire his dark orbs. As soon as he starts his animation you can sprint upto and behind him and get in 5-6 hits due to his long winded animation. This route takes abit longer then normal but it is a rather easy solo.
Be sure to break in between strikes for just a moment to allow your stamina to get a quick recharge. The Chloranthy Ring+1 and a Green Blossom aids in this even more.

All of Velstadt's melee attacks can be parried. His thrusting attack doesn't give the usual parry sound, however, if timed properly, you won't get hurt and he will be stunned as usual. After each sucsessful parry, you have time to safely attack him with 3 swings from a long sword or one swing from a UGS. Instead of an additional attack, use the time to regenerate stamina. In his second phase and high Ng's, if you fail to parry his two-handed overhead swing, he will most likely one-shot you, so some practice is in order. His moves are quite predictable, and once mastered, parrying Velstadt over and over again can be one of the most satisfying things to do in DS2. Due to his wide sideway swings, you sometimes even can parry him while standing behind him.
A note on co-op: The parrying player should wear the redeye ring. Even if parried, the sideway swings still seem to hit other players behind the parrying player (it looks like the swing is interrupted only graphically and still conects to everything on its way as unparried).

By standing far away after he is down 50% he will almost always use a long casting time ranged attack. You can run up to him and get a lot of hits in, then back off and repeat.