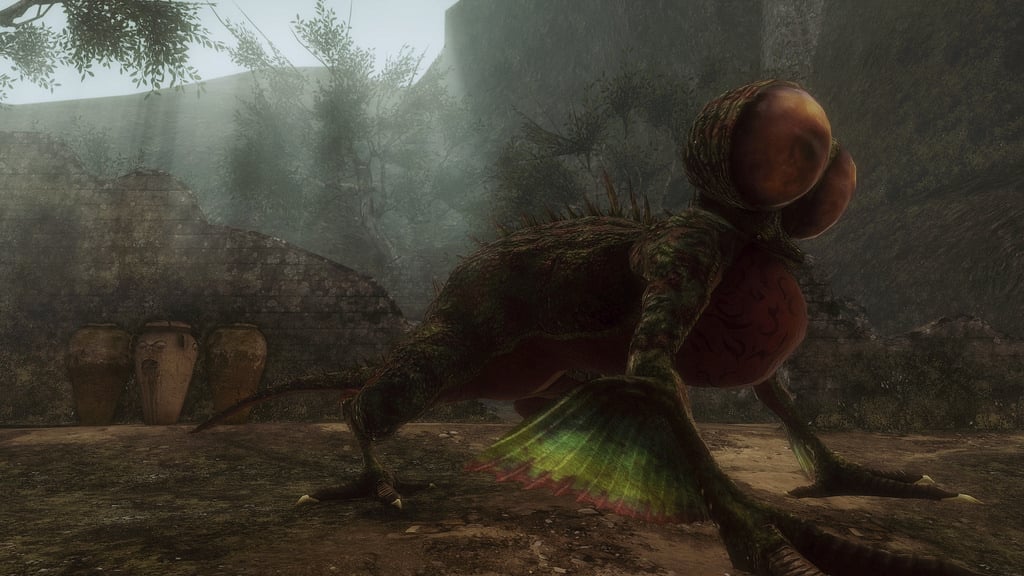 An impressive Basilisk specimen of enormous size with mottled green skin like that of a chameleon. Whether these creatures are the result of a divergence in the species' evolutionary line of the product of an Aldian experiment in unclear. They are not actively predatory and will make no attempt to attack unless cornered, so observers not looking for a fight would be wise to give them a wide berth. 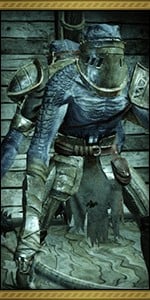 The Flexile Sentry is a merciless creature whose purpose is to punish the Undead. This terrifying, lizard-like creature oversees the ferrying of undead into the Lost Bastille. 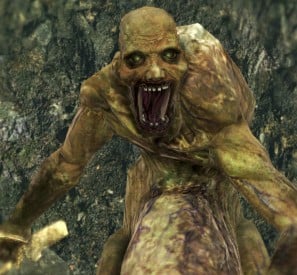 Goblins and humanoid creatures that lurk in the Shaded Woods. These monstrosities are probably inspired by Gakis and Pretas (cannibal demons of the japanese folklore with an huge belly).

Frog-like creatures that cast the petrify effect on players by using a fog-breath attack, otherwise offer very little danger. A giant, and much more formidable, version will attack the player more directly. Unlike in Dark Souls, these enemies can inflict physical damage with a leaping attack.

In Shaded Woods and Aldia's Keep, default Basilisk can be found in caves and trapped inside carriages.

In Brightstone Cove Tseldora there is a subspecies of Basilisk (a.k.a. Sand Basilisk) whose bulbous false eyes have completely atrophied as an adaptation to living in desert environments. This variant still attacks with petrifying breath but has also learned to burrow under the sand, enabling it to ambush its prey and travel undetected.

In Shaded Woods and Aldia's Keep, there is a subspecies of Basilisk (a.k.a. Great Basilisk) whose the size is five times larger than normal basilisk and green skin tone whick makes them look like an enlarged treefrog, the range of the mist is much wider, and the melee attack can even break the cages. 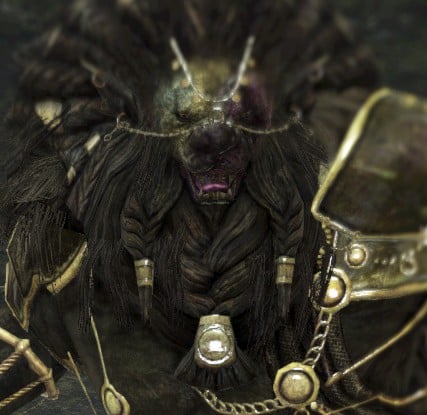 Lion Clan Warriors are phenomenally tough beast-men within the Shaded Ruins, armed with powerful axes and shields. Possessed of a fierce hatred of both humanity and the undead, they are both territorial and aggressive. Equipped with cursed battle axes, they can inflict curse status on an unfortunate undead in only a few swings, even through shields! They possess an incredibly strong resistance against magic of any kind; infused melee weapons will avail themselves little against these beasts, and they are highly resistant to both poison and bleeding. In exchange, however, they are somewhat vulnerable to physical damage, but their skill with both their axes and shields is daunting and they stand as some of the toughest foes one can face. They are especially vulnerable to backstabs and ripostes.

They can be extremely problematic if met at early levels. They do high damage, have high defense, and tend to aggro in groups, making them a challenge for the solo player. However, they do not seem to be overly quick and can be strafed for easy backstabs. May strike with high damage, long range, jumping attack if player is far enough away. They appear to be resistant to all types of magic except Yearn, which they'll blindly follow, resulting in an easy backstab opportunity, They are found in Shaded Woods. A stronger version of the Lion Clan Warrior is located near Tark in the shaded woods and has a gold headpiece to signify who he is. Also causes Curse to build. If you bait an attack from them, it can be fairly easy to sprint behind them for a backstab.

For casters, the easiest way of dispatching them is to cast Yearn and then finish them off with Shadow Dagger backstab, this will mostly result in instant kill at early NGs.

They tend to avoid interaction with people and reside at forest, as they despise their appearance, and the craftmanship of their weapon hinted that they were once intelligent creature, and yet they're now deformed into mindless beast, probably a result of Lord Aldia's experiment. 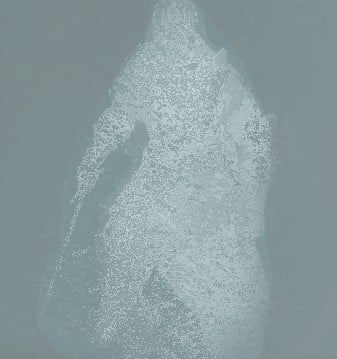 Guardian spirits lurking in the thick fog of the central Shaded Woods. Their identites are completely unknown as they barely maintain corporeal forms and are almost invisible against the mist. Are they fallen soldiers of a war long past, or the remnants of a clan that once dwelled in this ancient land?

Best fought using weapons with a wide arc of attack so that they can be hit easier. Player can not lock-on. Area of effect magic, such as Firestorm, is greatly helpful. There are two variants, one with a sword and dagger, and one with a crossbow and dagger. however, they can be marked with the hex Profound Still, if you lure them to the forest entrance. 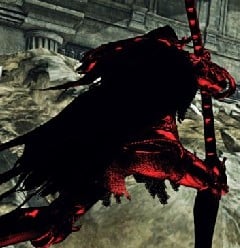