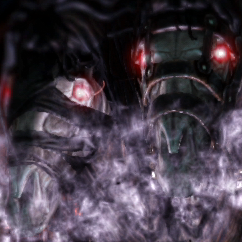 Like the name describes Executioner's Chariot, the boss is actually the Chariot and not the skeleton riding it. This boss has two phases. The Death Chase phase and the Fighting Phase. While in the Death Chase phase he will constantly ride in a circular motion around the map, in the fighting phase you will combat the two headed horse that pulls the Chariot.
To fight this boss again on NG:
You need to use a Bonfire Ascetic on the Undead Purgatory Bonfire, none of the Huntsman Bonfires. It doesn't seem to follow the same pattern as the rest of the bosses/bonfire progressions, but the Undead Purgatory Bonfire resets and strengthens all the enemies preceding the Chariot bossfight. I tested this by using my ascetics on all the Huntsman bonfires, with no change in enemies, then using it on the Undead Purgatory Bonfire and seeing them strengthened and the boss reset, and stronger, with the stamina ring available.

The boss is stronger and more difficult as any NG+ enemy/boss but so are the enemies (on the pillars) preceding the fight. Be wary and prepared for the mobs before the boss. An easy and safe way to get rid of the mobs is by using a bow to pull them from a safe distance. This avoids mass pulls. Use (poison) arrows to kill the respawning phantom right before boss. Position yourself on the bridge between the two holes and he won't follow but run up and down the bridge. Shoot him down. Good luck.

This boss fight is rather simple once you make it past the Death Chase phase. The fight consists of three phases: Killing the two Necromancers, pulling the lever, and killing the boss. Once you enter the room, a cut-scene will occur showing a skeleton pulling a lever which raises a gate. Once this boss fight starts, the Chariot will appear on your left and its way in a circular fashion counter-clockwise around the arena. Do not attempt to go to the right, as there is a gaping pit that you will fall through, while the chariot can still traverse this path.
There are a total of two Necromancers in this boss fight. The first one is linked with the first three skeletons that will arise from the ground and attack you. The second is linked with the other four. They will continue to resurrect the skeletons, which should all but be ignored. The first Necromancer will be found in an alcove on the outer, left side of the arena, and should be killed above all things first. From the entrance, run left, ignoring the first three skeletons. (Both Yearn and Alluring Skulls are useful here to keep the skeletons busy while running for the Necromancers.) The only way to avoid damage from the chariot is to duck inside one of the numerous alcoves in the walls. The scythes mounted on the chariot wheels can be rolled through but proper timing is mandatory. After the chariot passes the first time, this should give you enough time to get to the Necromancer. Once he's dead, allow the chariot to pass by again before moving on. With the necromancer dead, the chariot will ride down and kill the skeletons, so don't bother with them.
Keep pressing forward and do the exact same thing. Dodge past the next group of skeletons and duck into an alcove, allowing the chariot to pass again, then make your way to the second necromancer, who is found in an alcove on the inner, right side of the arena. Once this necromancer is finished and the skeletons are kill, wait for the chariot to pass once more, then run to the opposite side of the arena and pull the lever found there.
After you've pulled the lever, the gate will come down and the chariot will crash through it, destroying the chariot and killing the skeleton riding it. This is when it switches to the Fighting Phase. The fighting phase of it can be done by ranged or melee, which ever you prefer. For melee just circle the horse and wait from him to attack first. Then strike when he's in his recovery animation. Once he begins to blow breath attack, avoid it by going to his side or ducking into an alcove. During his breath attack is when he is most vulnerable, and you can deal the most damage.

There is a short way to end this fight. First is running as fast as possible and hugging the left wall--depleting the stamina bar will force the cool down of running to initiate thus preventing the player from running. The first Necromancer is three coves to the left, so the player can run, get in the same cove as the Necromancer and kill him; if done correctly, the player can get in before the chariot arrives. After that is the second Necromancer to the right; the player should avoid the Chariot this time by hiding or rolling (rolling shouldn't be done too early) at the side ways of the Chariot, then after the second curve there is the Necromancer. The next step after killing the Necromancer is running away from Skeletons and letting the Chariot take care of them. Now the player can safely pull the lever and fight the boss.
Summary: Run to the first Necromancer in the third left cove; do not lock on him to avoid lock on issues.
Run to the second Necromancer to the right; he can be found four coves away or after the curve. Then let the boss kill the skeletons and pull the lever.
.
The boss can hit hard, so avoiding his attacks and punishing him after recovery is recommended. Some of his melee attacks have ground effects, so sticking close is dangerous.

.You can use a ranged weapon or an large area spell (Preferably soul vortex, because of the boss's large hitbox) in order to kill the boss. Hide in one of the side holes and wait for the boss to pass. Shoot or cast a spell as he comes near to damage him. Poison works quite well. Once the boss is at 30-40% health the chariot will fall into the hole. All you have to do then is hit the horse once and it falls and dies.