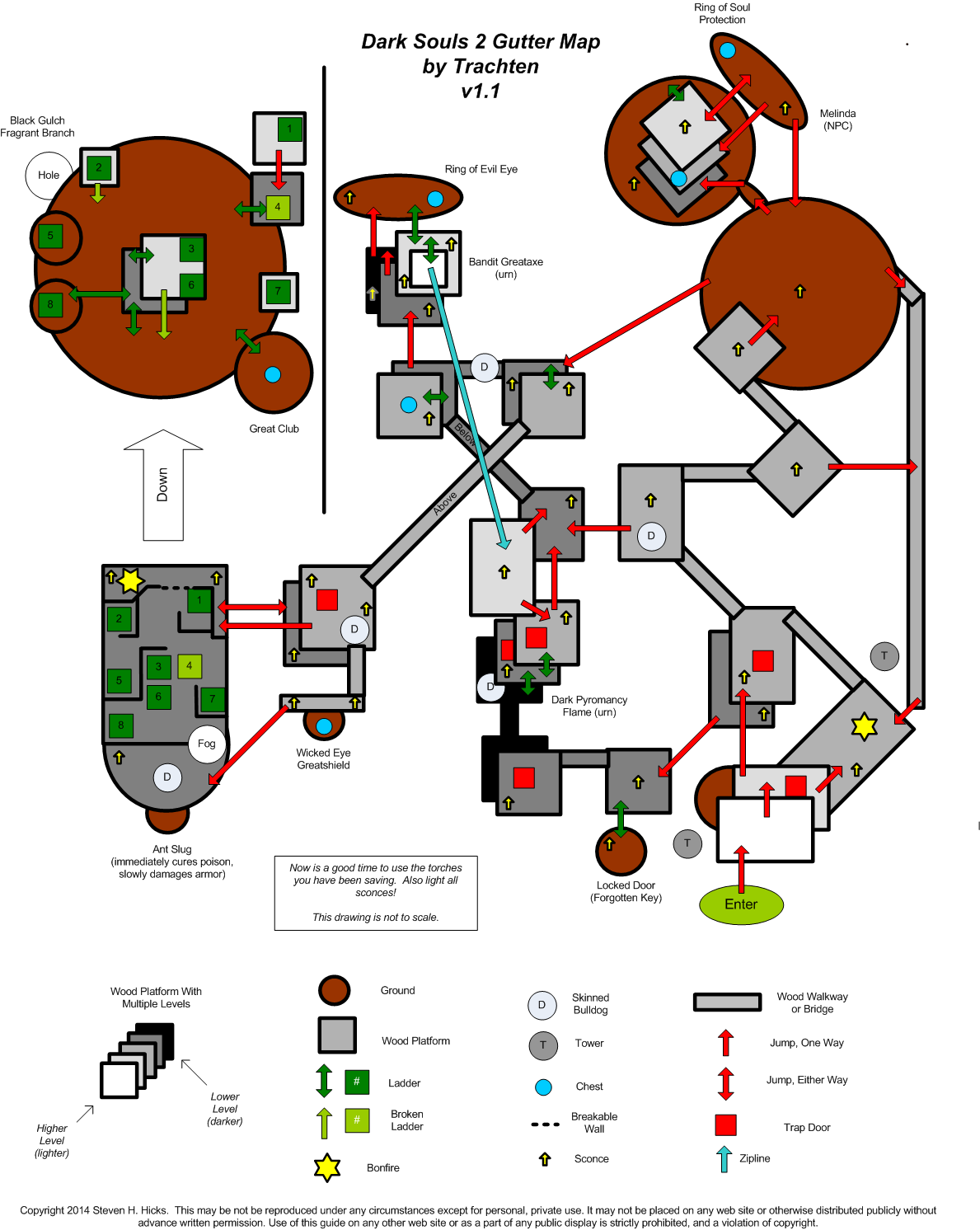 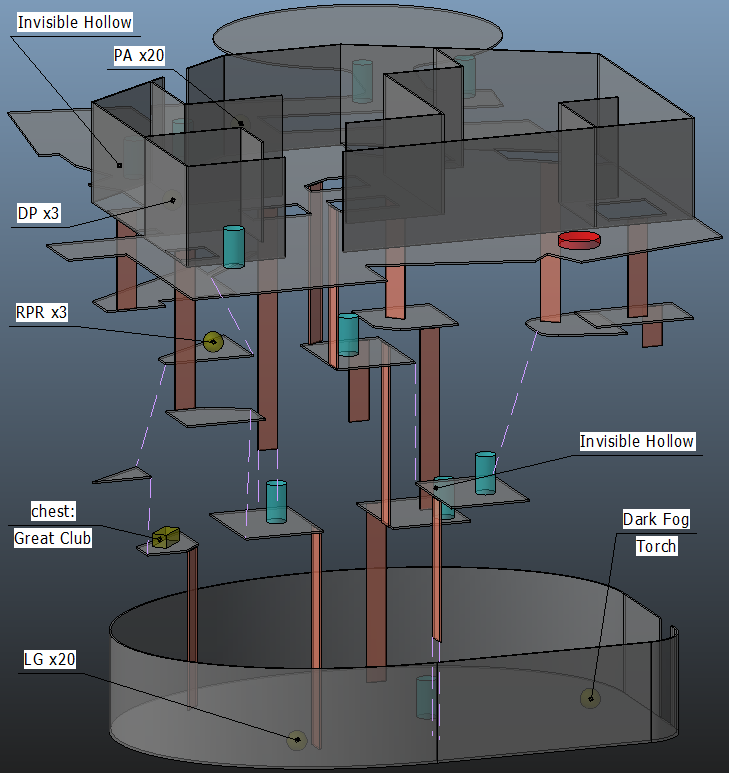 NPCs in The Gutter

From the Grave to the Gutter

Immediately after emerging from the tunnel from the Grave of Saints, you'll find yourself on a ledge with multiple stone statues that can and will spit poison at you; these will be scattered all over the area and should be destroyed to avoid taking unnecessary damage that can potentially be a matter of life and death down here. Destroy them before they get the chance to, then drop down to the wooden ramp below before dropping off again onto the highest side of the wooden ramp. 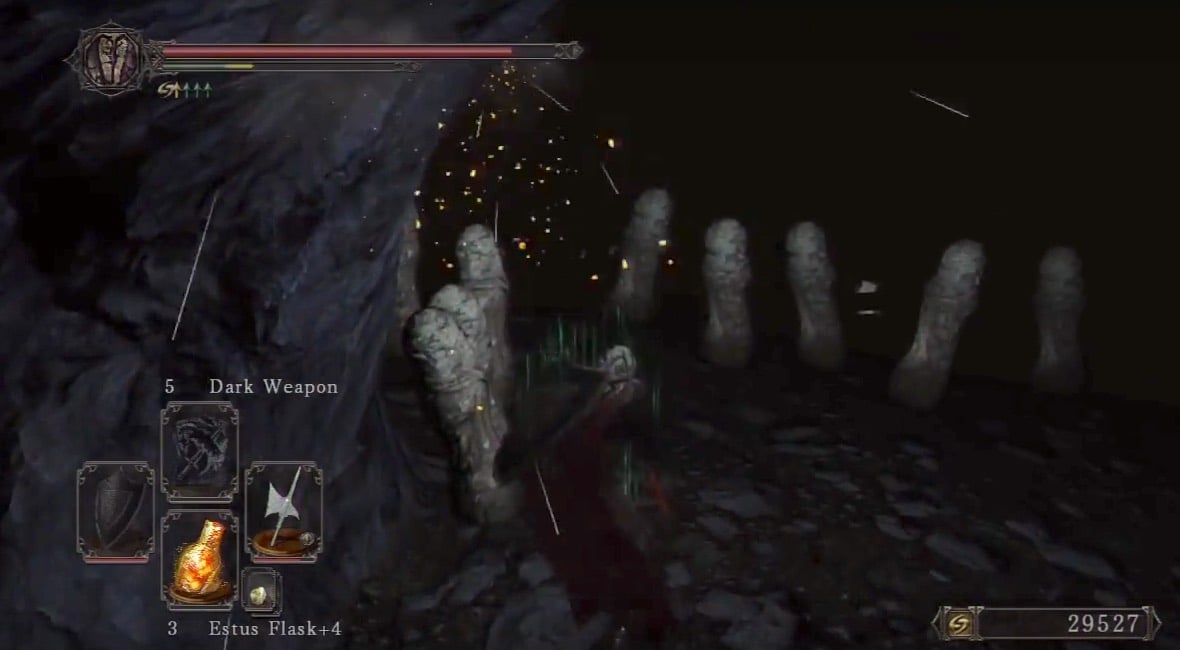 You'll land on a stone platform holding a Hollow and a few jars. There doesn't appear to be a way back onto the ramp so wear the cat ring, and drop to a larger wooden structure, where you can light a sconce and find the Bonfire across a small bridge (hug the edges of the platform to get to the bridge). From the bonfire, there's a jar, on the left, hiding 2x Dung Pie next to a sconce you can light. Head back to the bonfire and walk back up the the wooden bridge. If you continue in the middle of this platform the floor will collapse under you, only this time you'll land in a room with four Hollows. This is one of the many split paths in this place so let's cover one scenario at a time. 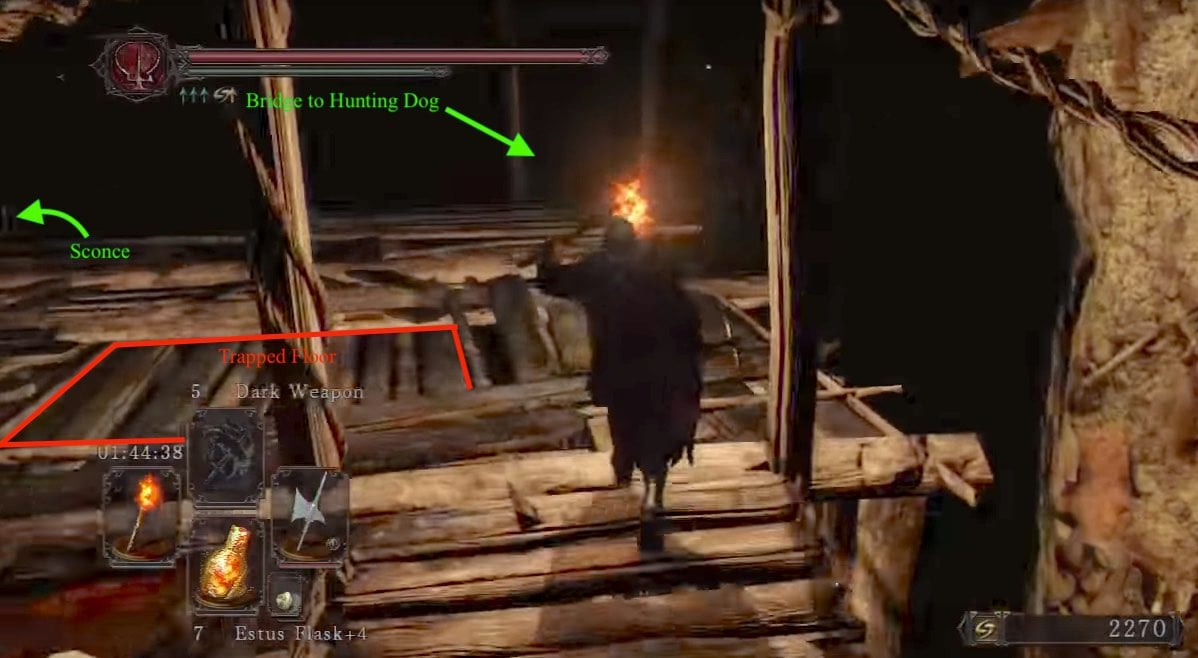 Assuming you haven't fallen through, head up the ramp to the right to fight your first Hunting Dog, then light the sconce at the end and kill the lurking Hollow. There is another one of those poison statues so break it, then head up the multiple ramps, fighting another two Hollows and lighting another Sconce, on the next platform.  At the top, you'll find yourself overlooking an area you can drop down to below. Down here are multiple Hollows. Kill them, destroy the statues, and break the vases to loot a Soul Of A Nameless Soldier.

Off the right side is a wooden ramp leading up, but we're heading off the far left side for now, hugging the the wall with the Sconce, drop onto the side of the building then down to the ground level and circle the building, firstly to destroy the poison statues and light the sconce, then to find a ladder. Next to it, is a room with nothing but three empty vases inside. Up the ladder, light another sconce before jumping onto the area to your left with a chest containing Ring Of Soul Protection. Still on this platform on the right, you'll find a Sconce and another Poison Statue (BEWARE: lighting this Sconce will most likely trigger Melinda the Butcher invasion). 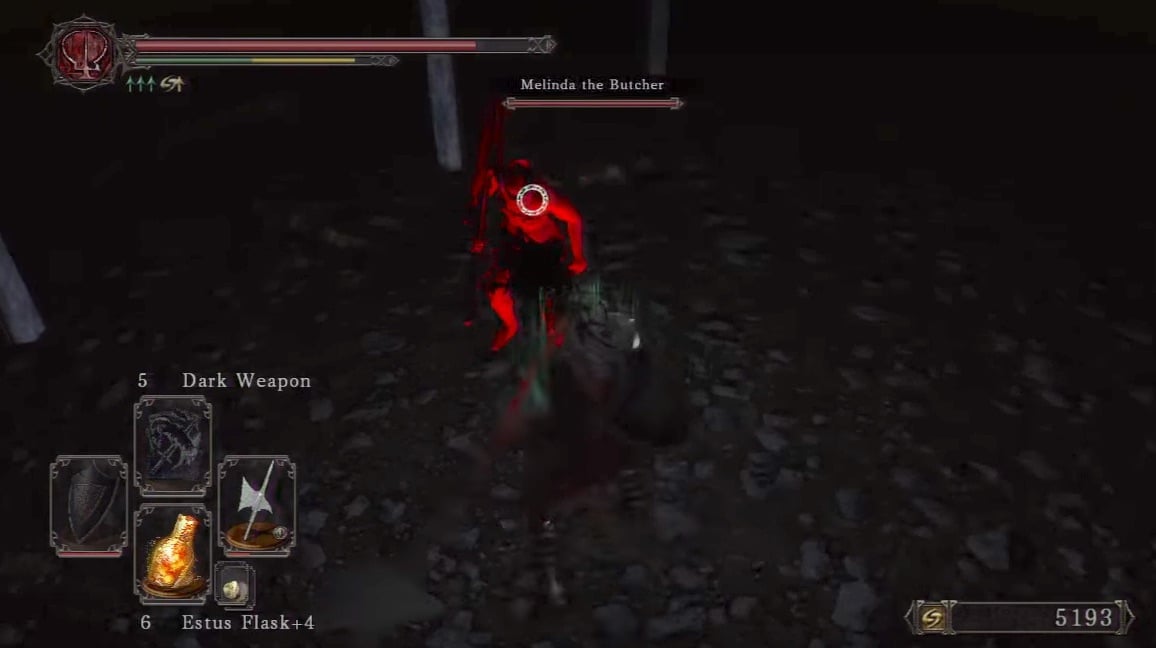 From the Sconce you can drop back down to the original platform we were at before we dropped off to the stone pathway (the platform we were on on the first paragraph of 'Meeting Melinda'). HOWEVER, before we do that, return towards the chest and face the building we arrived from to see a small ledge below which you can jump to. Inside the room you'll find a chest containing a Twinkling Titanite and 3x Small Smooth & Silky Stone. Once that's done, return outside and drop back down to the ground level, and climb up the ladder once more to return to the chest and sconce. Turn right and past the Sconce off the edge onto the wooden ramp we skipped earlier. Head up to shortly reach 3 Jars, one of which, holds a Lifegem. Past the jars, there is a ledge leading down to the first bonfire.Go back up the small bridge and move towards the middle of the platform to have the floor break under you. Defeat Hollows and head to the doorway blocked by a jar. From here you may or may not see a platform in the distance that you can in fact, jump to, containing two Hollows and a sconce. Give yourself a long-enough run up and do a long jump. 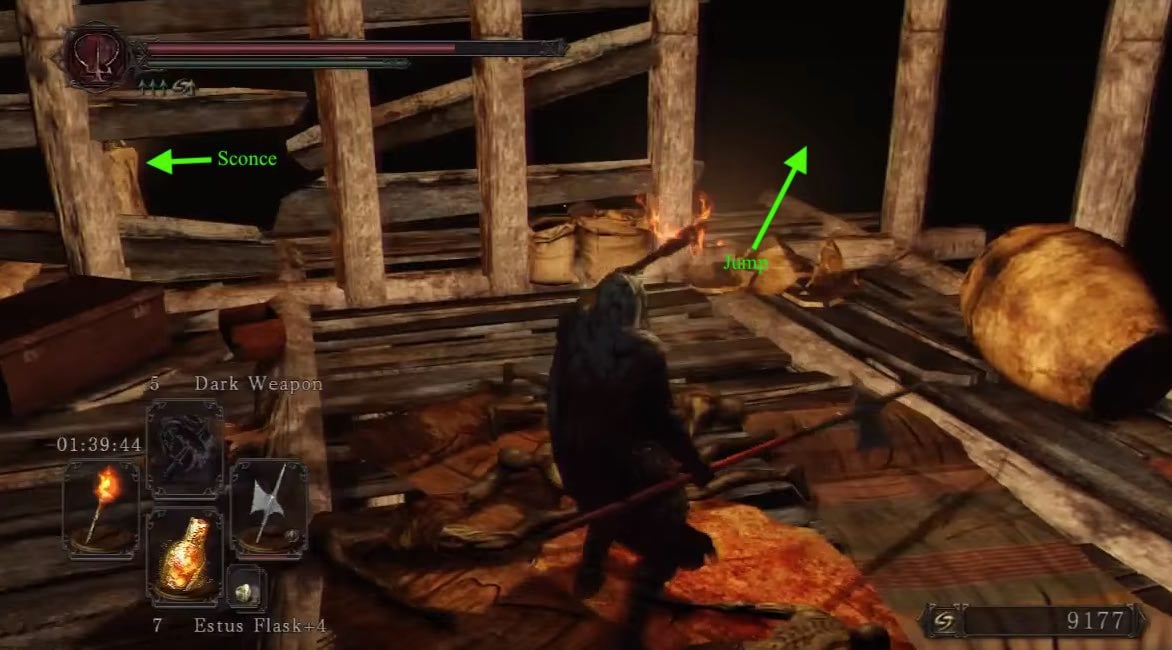 If you released him from his prison in Aldia's Keep, Royal Sorcerer Navlaan could invade you after making this jump.

After lighting the sconce, head up to the ladder. Upstairs is a Sconce and a cave with multiple Poison Statues, and a Large Locked Door, on the far end. Behind it lies a load more Poison Statues guarding a few jars, containing the best physical defence set in the game - Havel's Armor Set. To open the door you need to acquire the Forgotten Key, which is located in Black Gulch, so we have to ignore this door for now, and head back out.

Return down the ladder and proceed to the next platform. Light the sconce on the left, before you drop down through the hole in the floor. Once down the hole, continue through the doorway to reach a ledge with 3 jars. Break them to reveal a corpse holding Dark Pyromancy Flame and a Rotten Pine Resin. Enter the doorway next to the jars, to find a Hunting Dog and a couple of Hollows, kill them then climb the ladder. 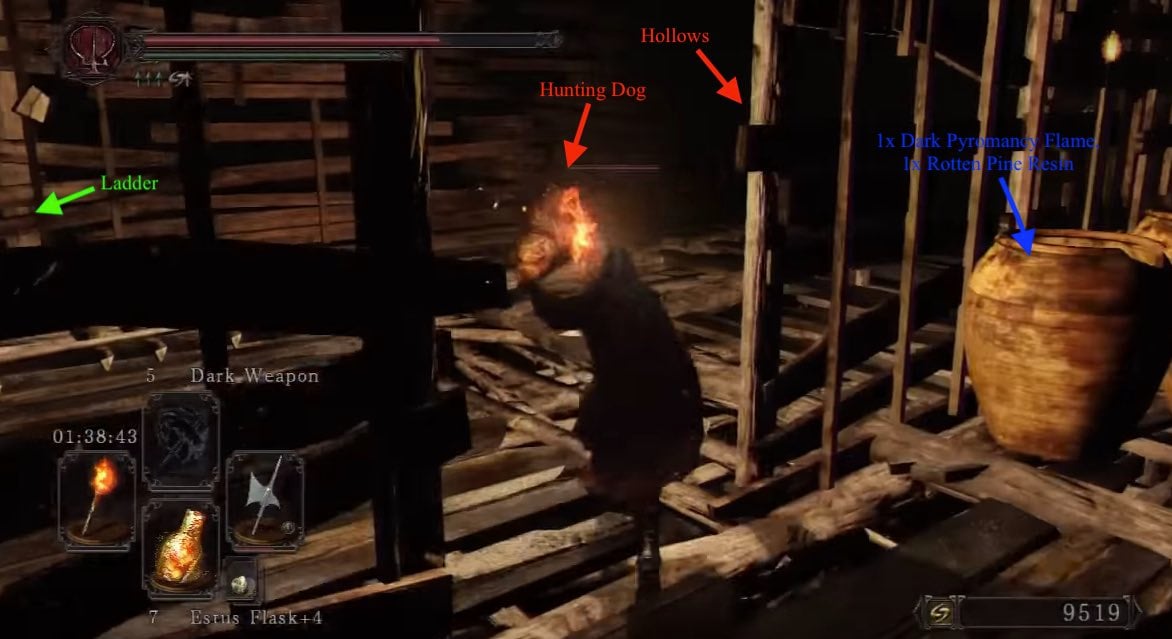 There is nothing interesting on the second floor apart from two Hollows - a third may or may not descend the ladder, if it does, then that's one less to deal with upstairs- and a Sconce. Climb the ladder to reach the final floor of this building. Up here there may be a Hollow, and definitely 3 jars, one of which contains a Soul Of A Nameless Soldier. Behind the Sconce, there is an outside ledge, DON'T proceed too far on this ledge (past big group of Posion Statues) as floor may break and you will get yourself killed (NOTE: From this ledge, it's a short jump back to the first bridge near the first bonfire. Helpful if you fell through the trap floor in the beginning). From this floor make a small drop down to the platform with 2 poison statues, a sconce, and a bridge. Break, light, then cross, respectively.

To the Zip Line

Upon crossing, a Rupturing Hollow will rush you, and another Hollow will drop from above. On the other side, there is another scone to light, and are multiple Hollows, and a Hunting Dog on the right. Kill them then head up the ladder to find a Sconce, and a chest containing 3x Black Firebomb. Go back down the ladder. Facing the bottom of the ladder, move around the right side. Head straight to a small wooden ramp hanging over the far right side. From it, drop down carefully to the wood below, then drop again to the platform with a Hollow. Circle around the structure to find 2 Jars hiding a corpse and a Titanite Chunk, with a sconce nearby. Move back around the structure and through the hole in the wall to drop down into the next room. Ahead you'll find another sconce and 2 more jars on the far left containing the Tattered Cloth Set. 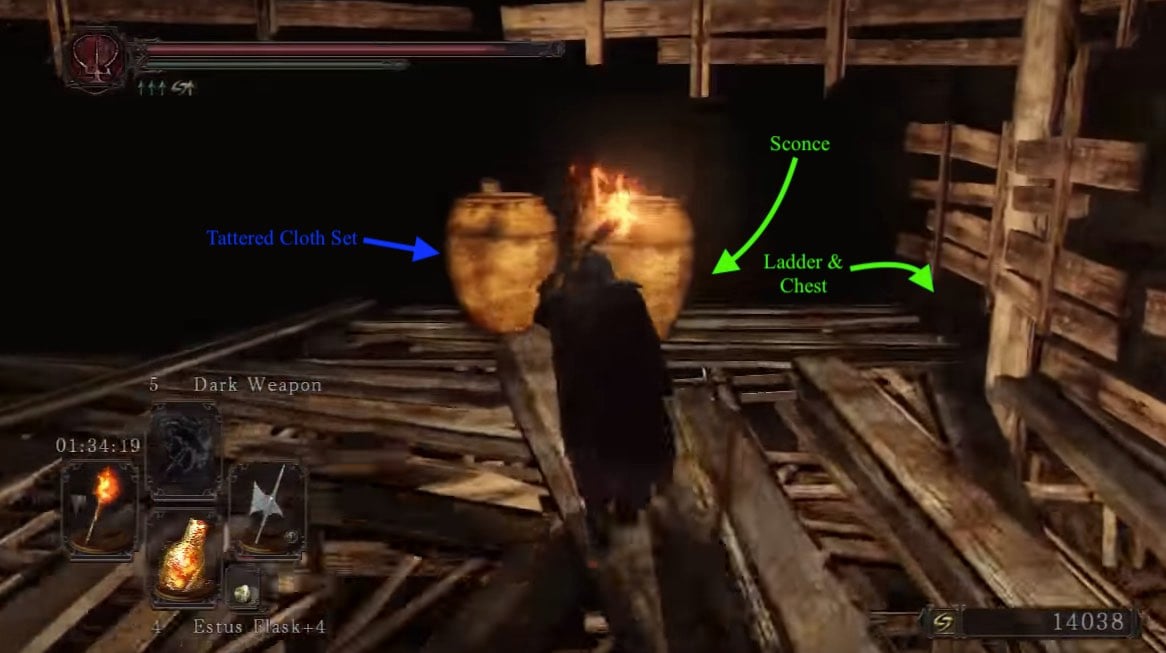 From here you can see a ledge to jump on. Be careful though, as there is a hanging Poison Statue that you cannot reach, try to snipe it with Firebombs or avoid it entirely. Light a Sconce on one end of the ledge and loot the chest containing Ring Of The Evil Eye, on the other end. There is also a long ladder to climb after fighting the small wave of Hollows here.

At the top, a bit ahead you'll find a sconce, and to your right are jars containing a Soul Of A Proud Knight. You should also find two Hollows playing dead. Circle around the structure to find a Rupturing Hollow and 2 more Jars containing a Bandit Greataxe. From here you can make a small drop to a slanted platform with a sconce. Then, drop down to another platform with one Poison Statue. From there follow the wall to the right to drop down again to a path that leads to an urn containing 2x Flame Butterfly. From here, you can drop to the platform with the chest that previously contained Firebombs. Make your way back to the top platform, and climb up to the roof of the structure. Up here, there is a zip line that will transport you to the top of the 3 storey building with the Soul of a Nameless Soldier. 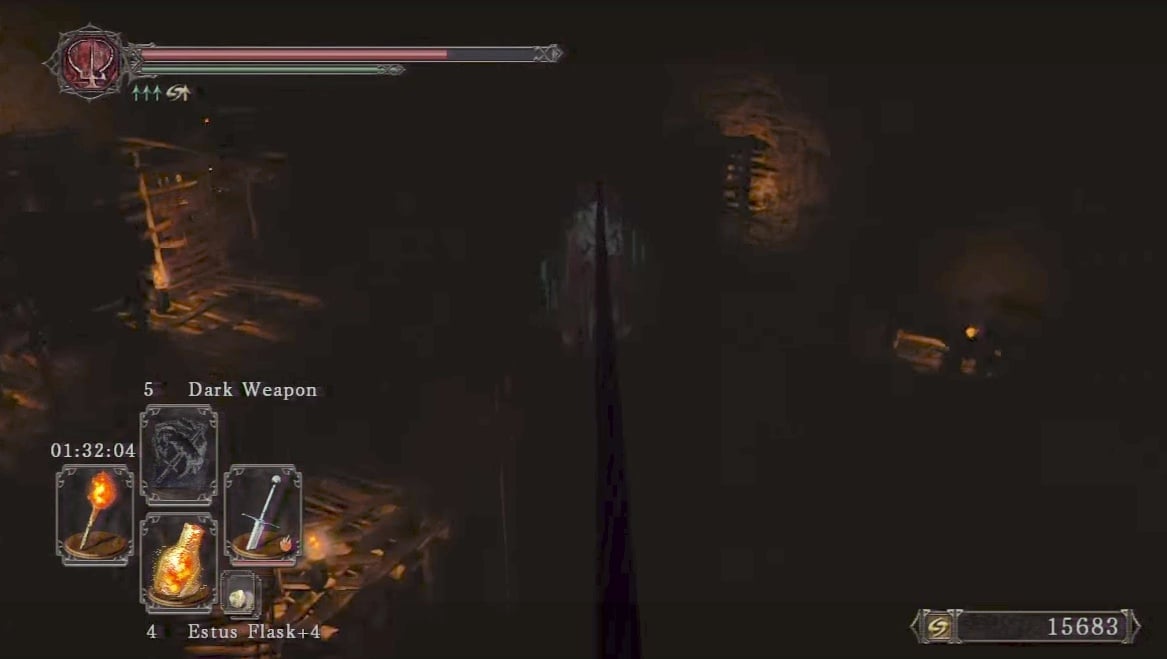 After riding the zip-line, go straight ahead and light the Sconce, then proceed forward then look for the bridge directly below the end of the zip line. Drop down to fight a Hunting Dog, and light the sconce. Climb up the ladder and proceed to the bridge. You may find yourself standing on a big open platform with another bridge connected to it. Mind the hole in the floor to the left, as it drops you into a room with another Hunting Dog and a jar containing 2x Black Firebomb; it's not worth dropping down now because there is a jump to a ledge full of Poison Statues to get away from this area. If you do decide to jump down, move to the outer ledge and jump across towards the multiple Poison Statues to reach the Bonfire platform, as will be mentioned later in this guide.

NOTE: You won't be able to get back to the bridge mentioned next without fast traveling all the way back to the start.

Ignore the hole and head across the bridge, light the sconces on the wooden platform, and enter the cave. Inside are multiple Hollows here. Wipe them out to safely loot the Wicked Eye Greatshield from the chest. Make your way out of the cave and drop down to the platform with Fog Gate (before dropping down its a good idea to snipe an Exploding Mummy down there). 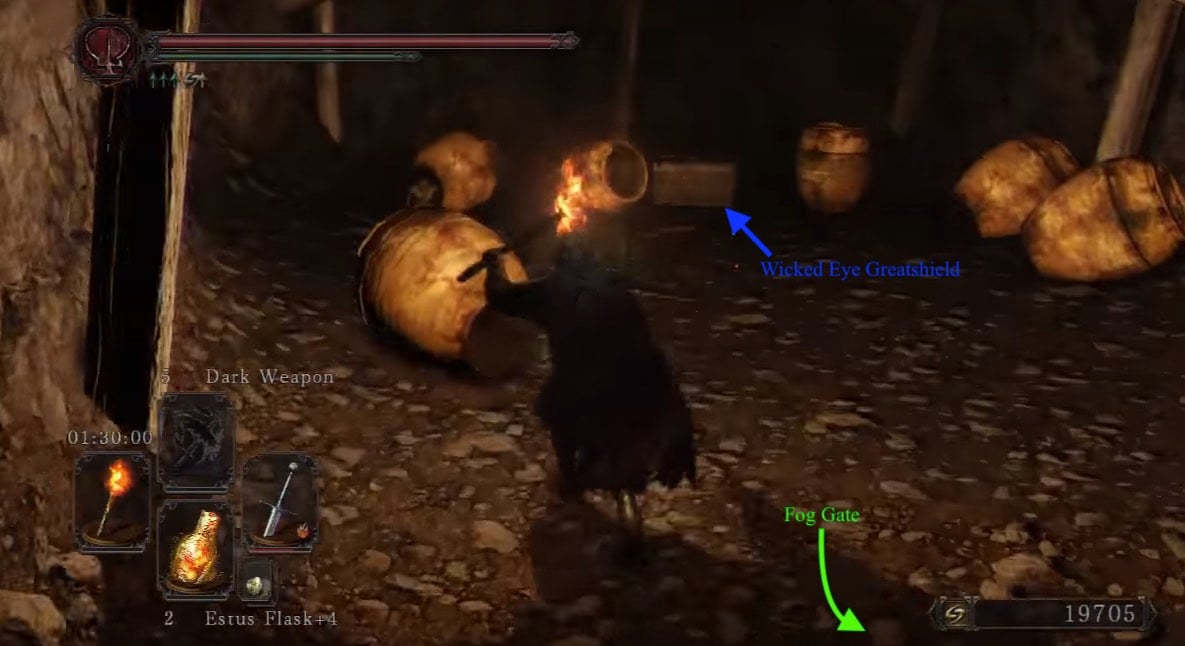 Clear the area of Poison Statues and Hollows, and smash the jars in the middle of the area to get 20x Poison Arrow . Head to a small cave with blue fog coming from it. Inside is a Rotten Vermin (Giant Ant Queen) that emits constant blue gas. DO NOT KILL THIS GIANT ANT, no matter how terrifying it may seem. This giant ant is actually friendly and will not attack the player, and the gas released will cure poison (at the cost of slight equipment durability damage). She is guarded by Poison Ticks that you can lure out or take from a distance to avoid doing damage to the Queen. After killing them, move deeper into the room and break the Poison Statues and the 2 Jars to collect 4x Poison Moss.

Let's head through the fog door to find a few Hollows and Poison Statues. There are multiple ladders, but most of them are pointless so we will focus on the important ones. First, ignore everything and head straight to the opposite wall in the room, with some Hollows to the left. On this wall, there is a breakable section that leads outside to a Bonfire. Use the bonfire as you please, then head back into the room with all the ladders. 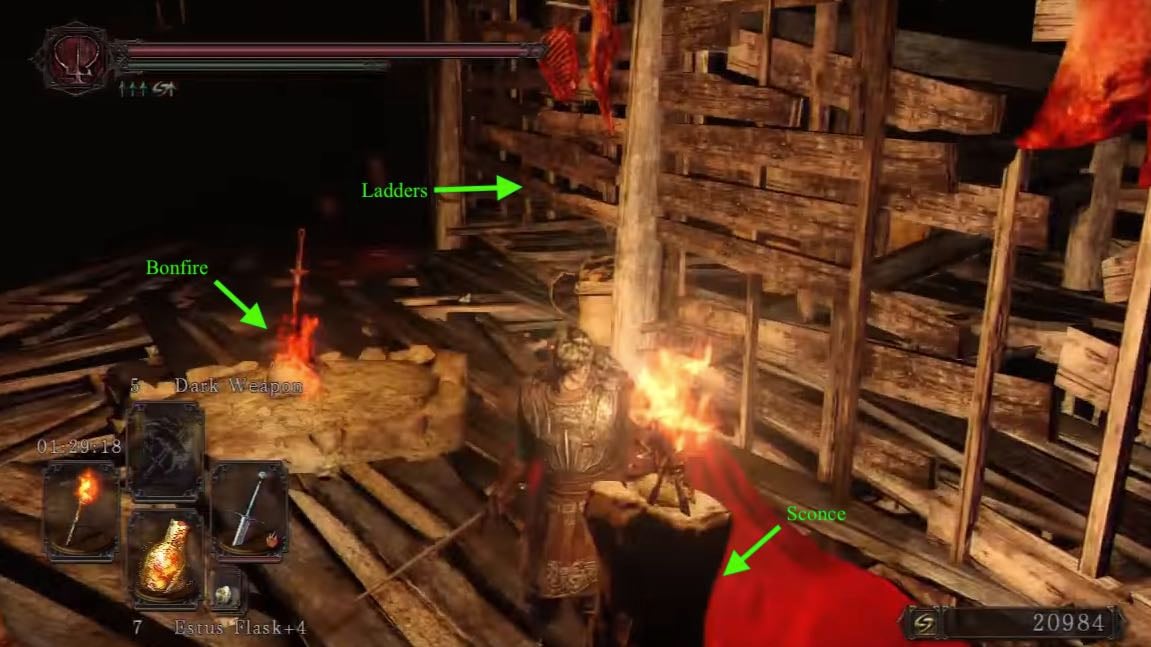 Upon entering from the bonfire, head straight and towards the jars on the upper left. These hide a ladder as well as 3x Dung Pie. Climb down and drop off the edge ahead onto a rock platform holding 2 jars. One of which holds another 3x Rotten Pine Resin. Drop down once again, off the left side, onto another rocky platform to find a chest containing the Great Club. Continue to take the next ladder down, but be careful as there are many Hollows waiting at the bottom.

Explore this area, break all jars to obtain a total of a whopping 20x Lifegem, 1x Dark Fog and 1x Torch. Finally, find a hole in the wall blocked by more heart-like jars, and drop down onto the ledge. Light the Sconce and grab the Fragrant Branch Of Yore. Before proceeding into the Black Gulch.