After meeting Licia of Lindelt in Heide's Tower of Flame and expending all of her dialogue, she will move to the contraption in the tunnel leading to Heide's Tower, in Majula. You will know if she's there because the light above the door will be shining brightly. For 2000 souls she will shift the path and will grant you access to the Huntsman's Copse -however if you have no regard for her life, or her miracles, you can simply kill her and reload the game to access these areas for free. 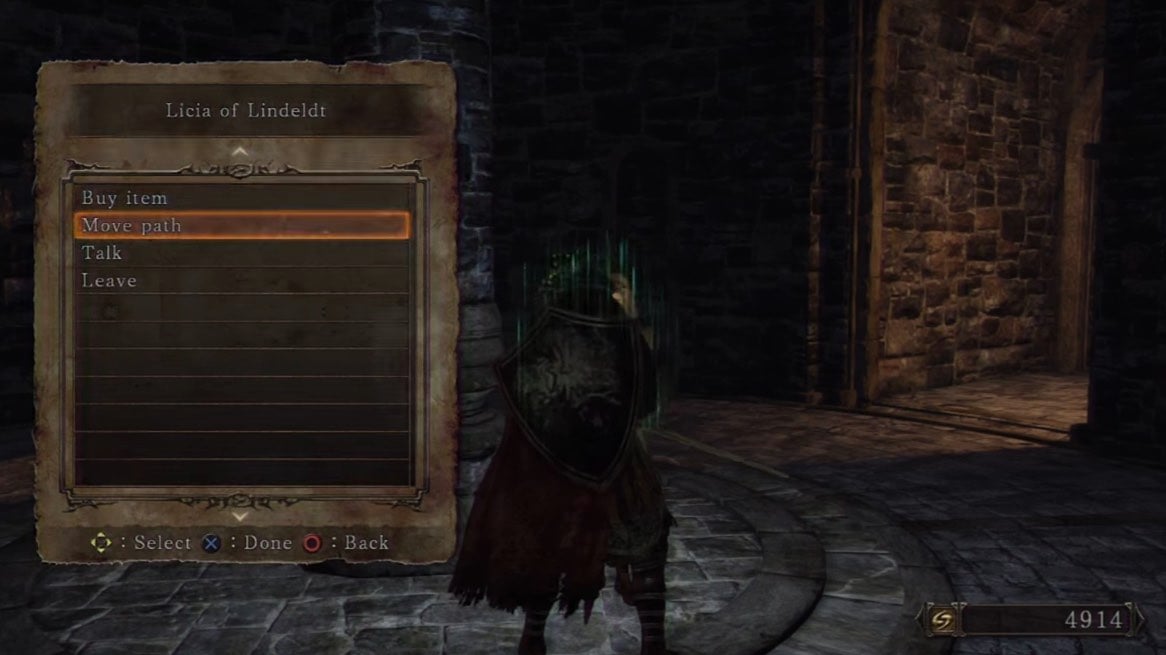 Upon first entering the tunnel, you'll immediately notice a corpse with a Rouge Water, followed by a long cave up. Continue until you come across an NPC named Felkin, sitting in a chair facing the wall. A Hex trainer that claims you lack the skill to learn his trade, unless you've attained a level 8 in Intelligence and Faith in which case, you'll have access to him as a merchant. When you exhaust his speech, you will be given the Sunset staff which requires 20 faith and 20 intelligence and the Hex Set. 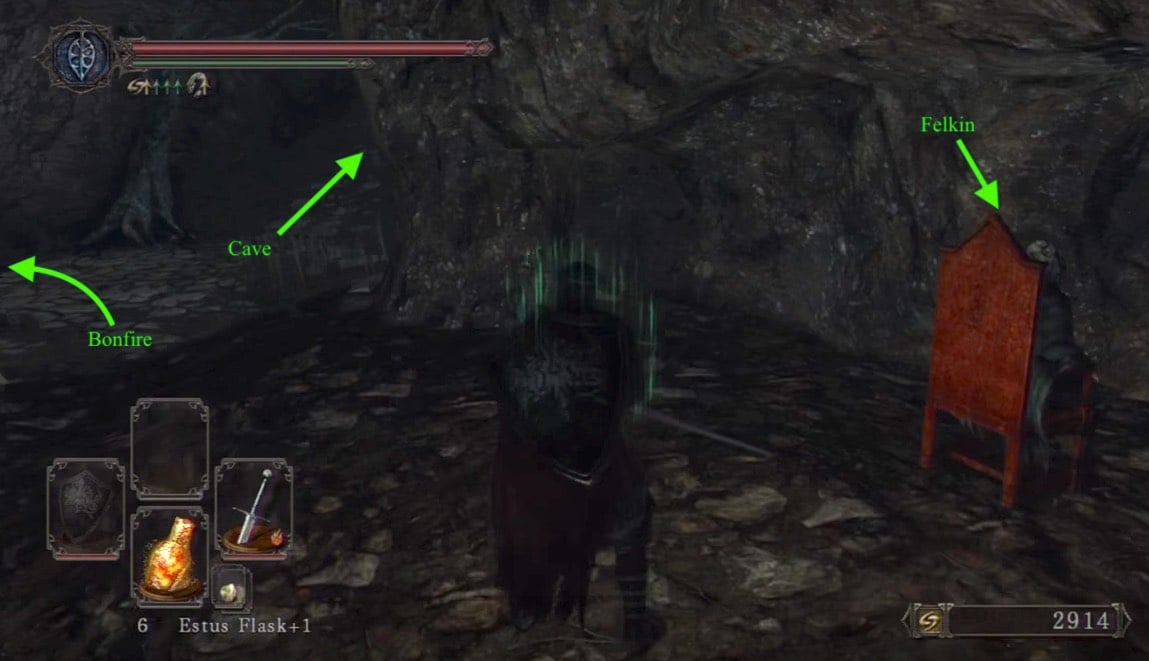 Shortly after exiting the cave, you'll find the first bonfire to the left. On the edge looking out towards the horizon, you might see various messages saying "try rolling" as is typical in the Souls games--don't. Also, before leaving, the proceeding areas become a bit easier if you've got a torch lit, so take advantage of the never-ending flame of the bonfire to light it.

After leaving the bonfire and heading up the path on the right, you'll find a kneeling Hollow at the entrance to another cave, in which another Hollow will attack you as soon as you enter it. After dealing with them, move through the cave quickly, dealing with the Poison Moths above that will try to spray you with poison mist--rather feebile, can be taken down with 1x Throwing Knife--and the Hollows on the ground ahead of you. Below the path you may notice a corpse with an item, ignore it for now. 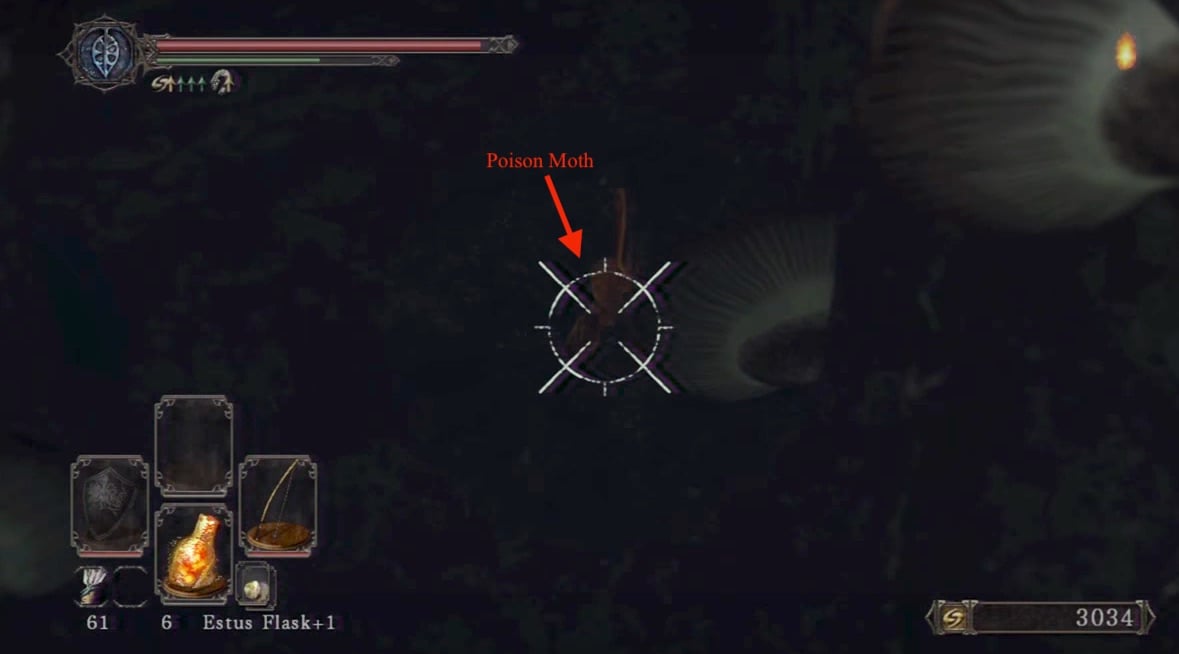 After exiting the cave the path will split, one path has a gap with a tree that can be knocked down on the opposite side, and the other leads up to a dark building; we're heading into the latter first.  Upon first entering, a Hollow Rogue with two daggers will rush you, and another will shoot poison arrows from the other side. Lure the melee threat out then return to deal with the rest. At the end of the walkway there is a door you should run over to and open, then quickly cancel the action and roll away to dodge any incoming arrows as well as another Rogue that breaks the door. Deal with him then you can smash the boarded up windows to let some light in, and go through the doorway. This leads back outside on the ledge above the staircase, with an Abandoned Hollow on the far edge, and a corpse hanging of the side with a Cracked Red Eye Orb. Then go down the ladder and to find a room containing the second bonfire, to your left. 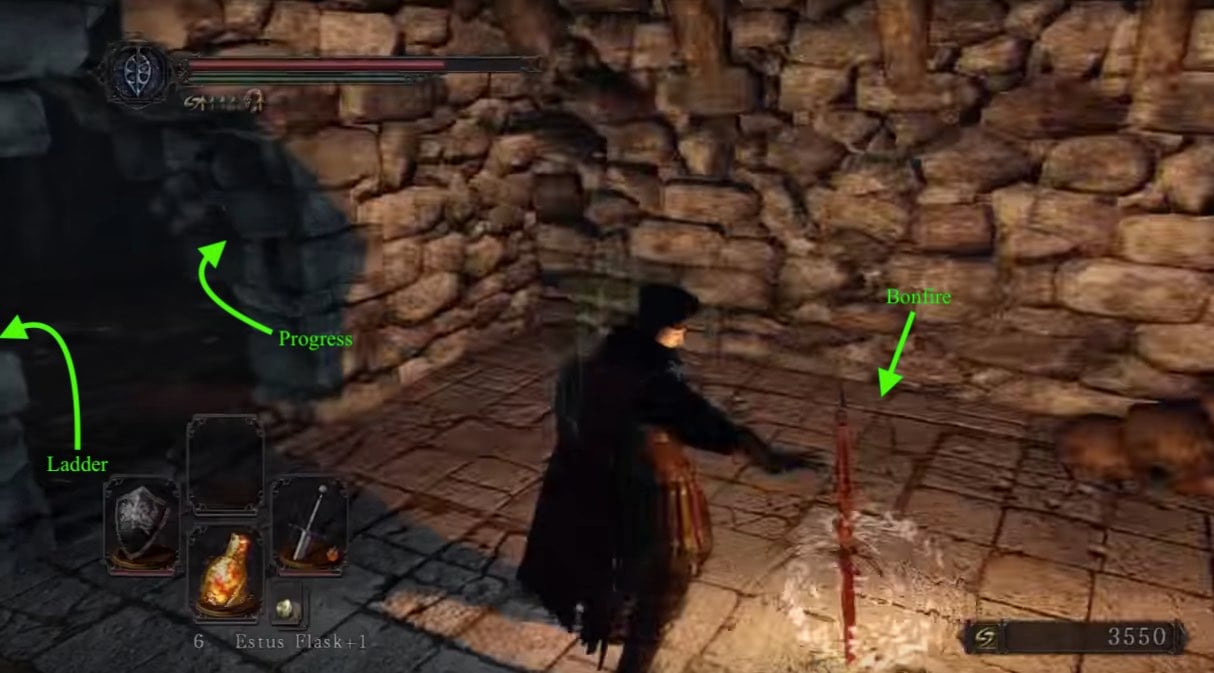 Across from the bonfire there is a stone pillar with a corpse on it that you can jump to, it has a Pharros' Lockstone and a Token of Fidelity; climbing back up the ladder will make the jump easier. Looking back toward the bonfire there is a ledge down below, drop down and you'll find yourself in a lower section of the butterfly cave. Beware, there are more butterflies and an Executioner below. At the end of the walkway is a corpse with a Monastery Charm and a Soul of A Proud Knight. Use Throwing Knives to kill the butterflies, 1 is on a mushroom next to the corpse the other is on the left side of the walkway when you come in and then drop down using the mushrooms. The chest at the bottom contains Ricard's Rapier, and directly opposite it on the other side of the cave, there is a rock wall that you can open by pushing the "use" button on your controller, that leads to a room with a corpse with a Large Soul of A Nameless Soldier and an Iron Maiden lift that takes you up. 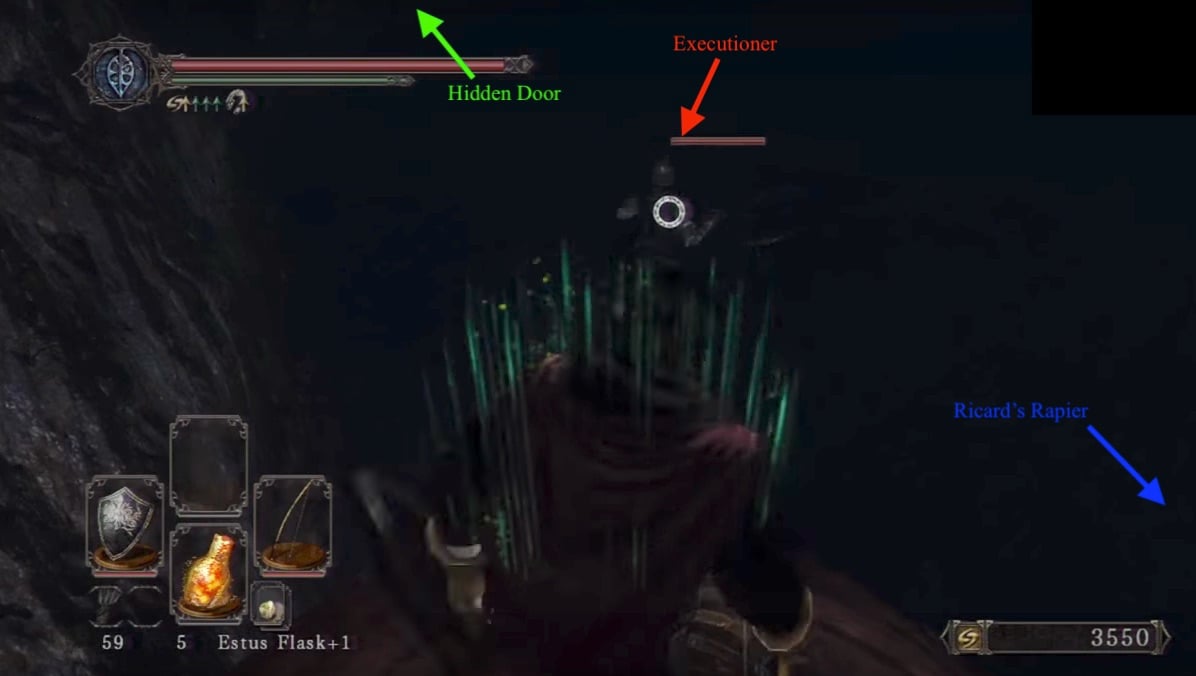 The lift leads back to the dark room we passed through, but on the other side instead. Deal with the two thieves, then go down the stairs to collect some loot. Be weary of the large pit in the center of the room. On the floor hanging on the edge of the pit is a corpse with a Lifegem and a Soul of A Lost Undead. In the corner of the room, there is also a corpse with a Bandit's Knife. Head up the staircase, and go up the ladder, opposite of the door you came through. At the top, a club-wielding Rogue will be waiting. A Rogue will jump up from the ledge, deal with him and drop down. On the ledge you'll find a corpse with a Poison Moss and a Lifegem. Drop down once again, and roll towards the door and return to the bonfire.

Journey to the Third Bonfire

Heading out the bonfire door, and right will bring you deeper into the Copse. Continue down the path to find a Hollow Laborer patrolling the bridge along with another Hollow. To your left, before the bridge, hides a Hollow behind a tree, and a corpse with a Large Soul of A Lost Undead and a Small Orange Burr. Back on track and across the bridge, you'll meet your first Undead Huntsman. Despite the intimidating appearance, he's not that hard to kill; kite him across the bridge while baiting his attacks to get two or three swings in, then just rinse and repeat. Kill the Moths before continuing onward. There are two more Huntsman to deal with ahead, then head into the cell to net a Morning Star and a Large Soul of A Nameless Soldier, from the corpse. The third Huntsman guards a corpse with a Aromatic Ooze. Near the second butterfly you should have killed, is a corpse with a Lifegem. 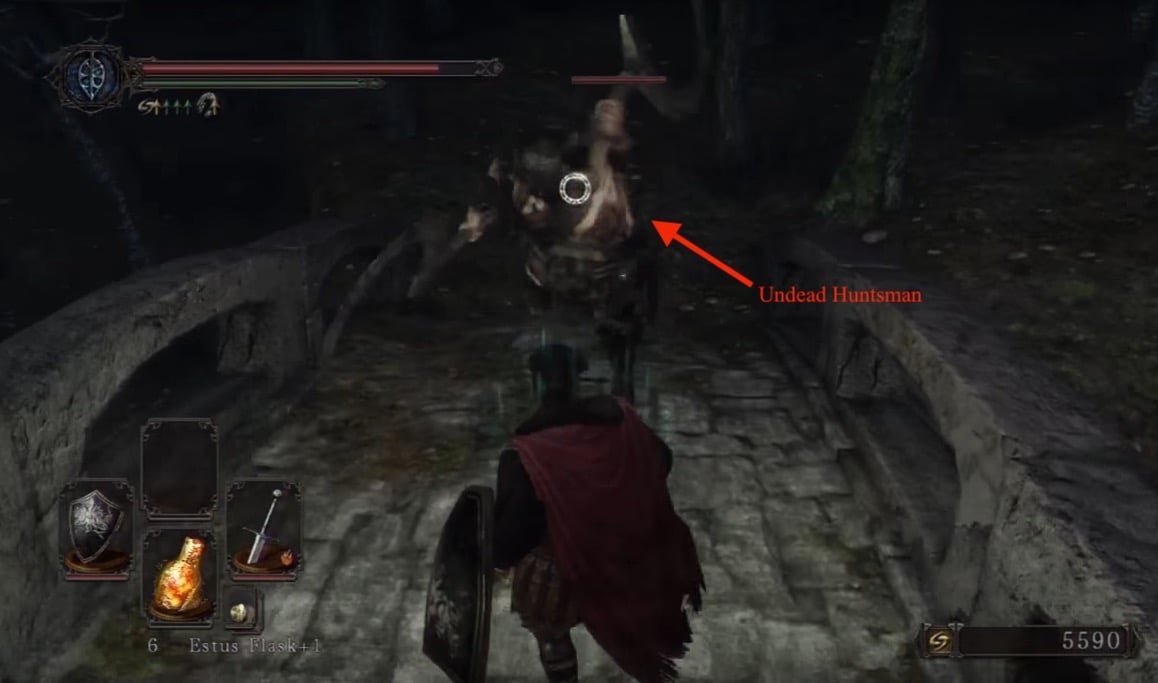 Now there are two paths you can take, one leads to the Undead Purgatory, the other leads to the third bonfire:

To the right of the first bridge is a second, where there are two Hollows and an Executioner, deal with them quickly and on the ledge is a corpse with a Notched Whip, then follow the path where another four Executioners (replaced with Red Phantom Purgatory Guardians in NG+ onward) on tall pillars, two with whips, two with staffs. Deal with them one by one and head across the bridge where a red phantom with a Greatsword and shield is waiting (he only respawns in NG+ onward, drops Greatsword +3).

Continuing to the Bonfire

To get there, go up the hill past the first bridge where more Hollow Rogues are waiting. Deal with them, and look over the side where the hut is and drop down into it, there are two corpses one containing 2x Poison Moss and a Green Blossom, the other has the Soul Spear spell. An Executioner lurks below as well. Follow the tunnel out, and go back up the hill on your right, into the far hut. Another Rogue will drop down, kill him, and pull the lever to lower the bridge and now you can get across. As soon as you exit the hut you're in, you may be attacked by a Stray Dog and a couple of Rogues. The cell across the bridge holds a bonfire and an NPC, but its locked. To get the key, cross the stone bridge next to the pile of burning bodies, more Rogues await.

In this dark canyon with narrow ledges, its important that you take your time. Continue down and the path will split.The upper path leads to three more Hollow Rogues and a corpse with 10x Poison Throwing Knife There is also a Crystal Lizard up here. Looking off the cliff edge there will be a small ledge. On the ledge is a corpse holding 3x Poison Moss. This is also a convenient spot to snipe the Rogue below.

Head back down to the lower path and off to the side is a wooden bridge, this leads you to Skeletons and Necromancers; don't go there yet, instead continue down the path and there will be three more Rogues to deal with, one archer is in front of the cell and two more melee ones inside, as well as a corpse holding the Undead Lockaway Key (NG+ only: Two sickle giants will appear at a certain point before being invaded and after the key pickup). Continue down the path and you'll encounter a scripted NPC invasion, Merciless Roenna. 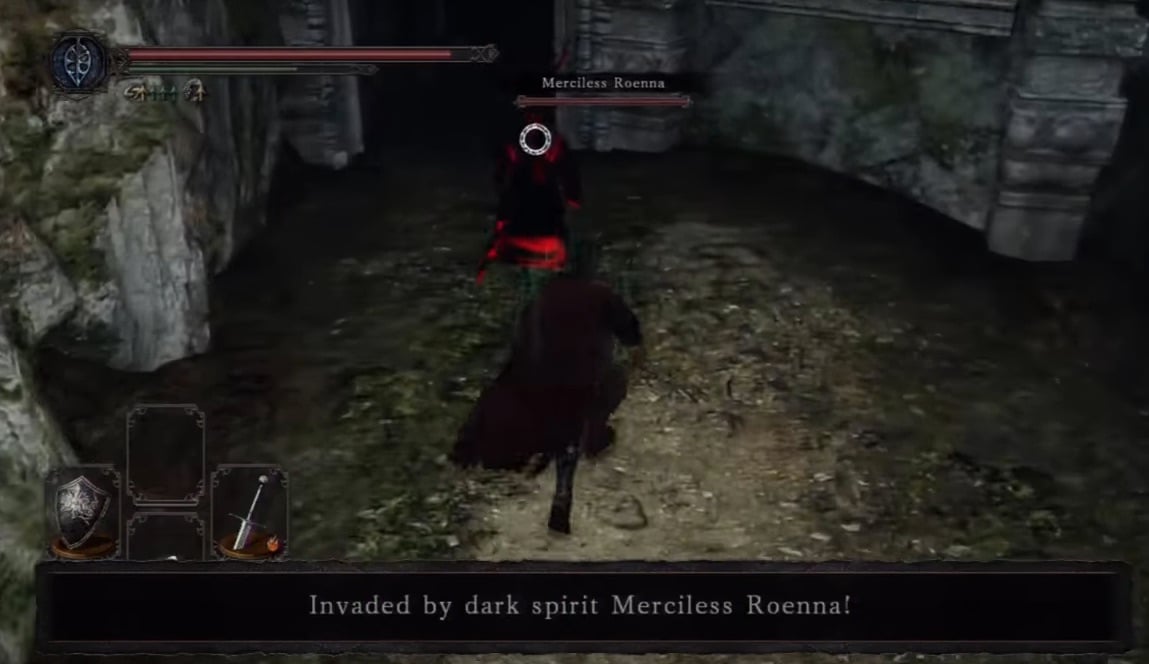 Return to the locked bonfire for now and use the key to unlock it to access it and be able to interact with the NPC Creighton of Mirrah inside. He teaches the 'Fist Pump' gesture and tells you how he got locked up inside. Killing him results in him dropping his mask and Melentia will sell the rest of his set. 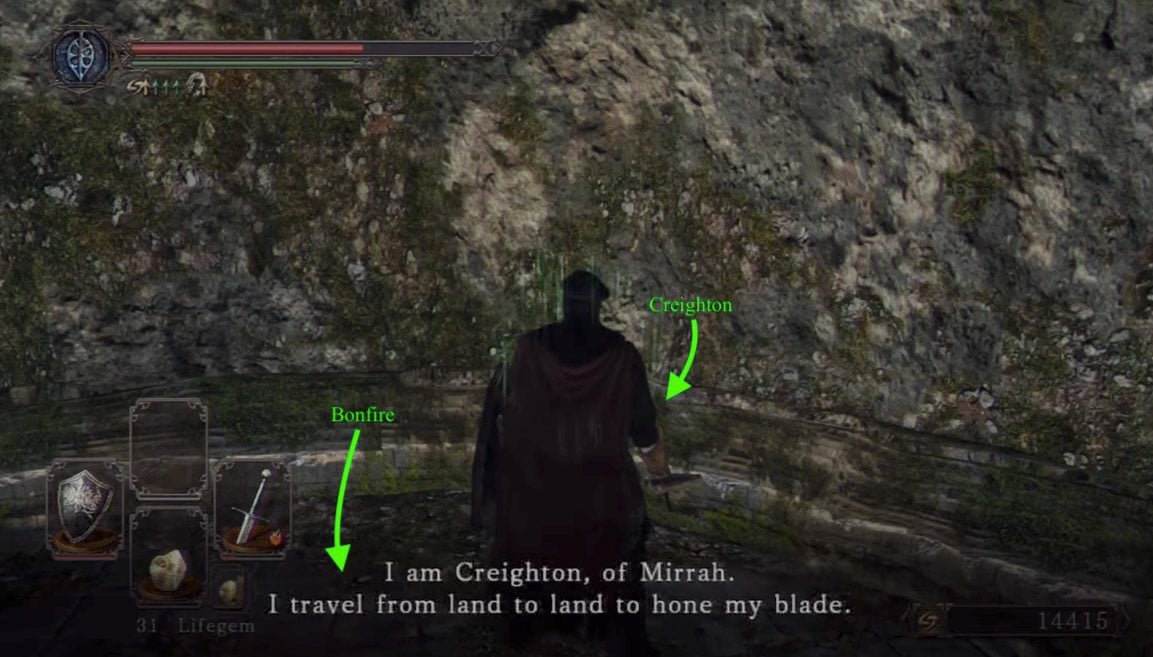 Next to the bonfire will be a cave, this leads to skeletons as well as jars that emit a cursing fog, Upon entering you will see a sconce to your right as well as a corpse with a Magic Mace and a Titanite Shard. One of the skeletons is buried below the ground next to the jar, inactive until you get close to it. Another one is further in the tunnel, carrying dual scimitars, if you attempt to kill them, they'll soon be resurrected by a dark necromantic magic. Watch out as there is a skeleton behind the jars. Destroy all jars from here on with a good ranged attack to avoid curse build up from the laughing jars. In the next area a pathway immediately to your left holds a hiding skeleton.

Further on the right hand side of the room is a skeleton archer and the Black Hollow Mage (also the necromancer who keeps reanimating the skeletons here, they have a rare chance to drop Black Hollow Mage Set and the second best sorcery dedicated staff in game: Lizard Staff). Kill her to stop the Skeletons from respawning and carry on. Another option is to use Yearn and Force to knock the skeletons into the bottomless pit. You will come to a closed gate which you can't pass as the lever is on the opposite side. Back track to the small pathway which the skeleton was hiding in and you will arrive outside again. Cross over the wooden bridge and continue right down the path and it will lead you to the boss fog gate where you fight the Skeleton Lords.

Before entering the fog, move along the right hand path near the waterfall to come to the opposite side of the cave from earlier. You will come to a room with a necromancer and skeletons on the left side. Careful, as the floor here is missing in some places. Use ranged attacks to dispatch the Necromancer. Move forward and take the path to the right first. This leads to a broken bridge with a corpse holding Combustion pyromancy spell and 3x Titanite Shard. Double back and turn right, taking the path leading towards the sconce. At the end of this path is the lever to the closed gate as well as a corpse holding 1x Estus Flask Shard, a Crystal Lizard and there is a summon sign for Creighton of Mirrah. Turn around and head back out of the cave and approach the boss fog door. 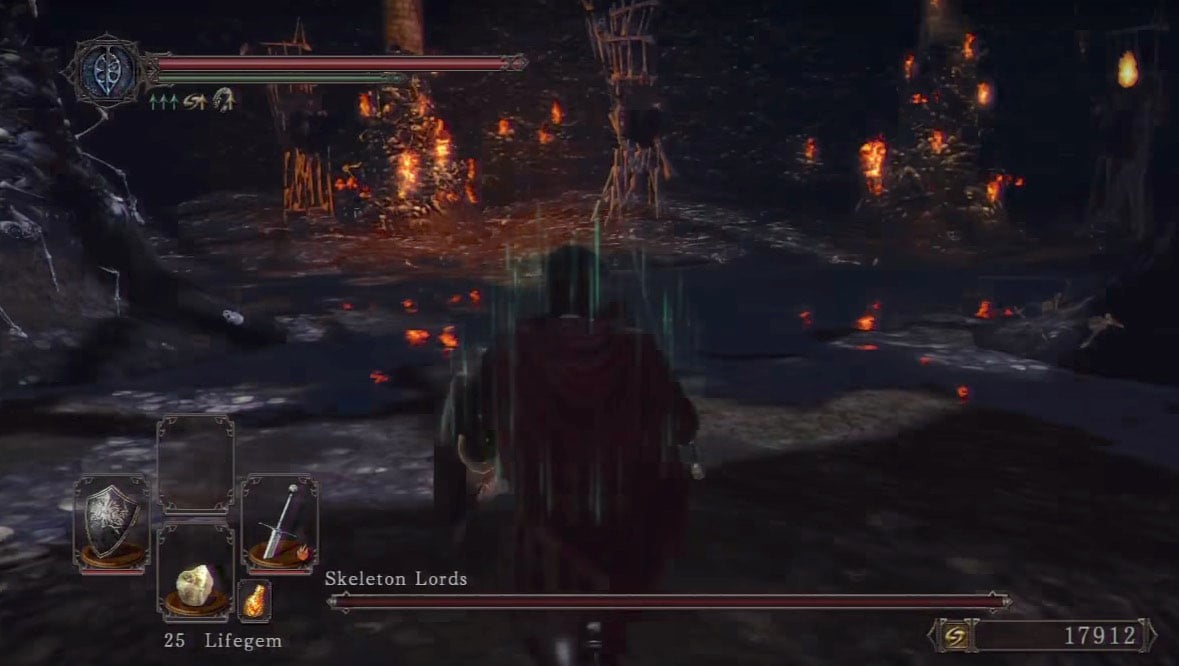 Once defeated, the player is rewarded with the Skeleton Lord's Soul.