Leydia Pyromancer is an enemy in Dark Souls 2. 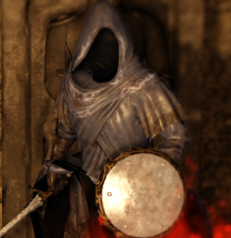 A ghostly spellcaster of the Leydia Pyromancers. Although pyromancers in name, they were adept at a wide variety of magic and in their conceit they once occupied the Undead Crypt. Their brazen misuse of death drew the ire of the Fenito, who branded them transgressors; the apostles were slaughtered and subsequently buried in the Crypt alongside other occupants.1

Legless with a wraith-like appearance, also one of the members of Leydia Apostiles along with Leydia Witch (referred by Leydia Gloves). These enemies are less dangerous than the witches but are capable of attacking with swords and limited magic. These ghost-like enemies respawn infinitely from tombstone-like slabs found around the Undead Crypt. They materialize when you get too close to their tombstone/coffin or when a bell is rung. When a bell is rung, all of the Pyromancers will spawn at once, and will mob the player. The tombstones they spawn from can be destroyed, and will stay destroyed for the rest of the NG cycle or until a Bonfire Acetic is used. They appear from their graves to ward off the players and protect the crypt.