Moon Butterfly Set is an Attire or Armor in Dark Souls 2. Armor sets do not provide specific benefits, so players are free to mix and match their preferred parts to optimize their Builds.

"Hat/pinions/cuffs/skirt made from wings of the rare moon butterfly. Poisons those who approach its wearer."
"Also extends jump distance."
"Little is known about the moon butterfly, which only appears on full-moon nights in winter. Some say the butterfly is a magical being, and its larvae have never once been spotted."
Effect(all): Poisons nearby foes
Wings/Skirt Effect: Increases length of jump 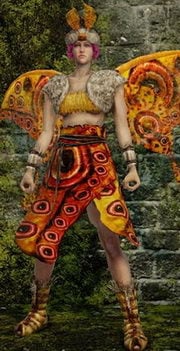