Hollow Mage (Black) (Necromancer) is an enemy in Dark Souls 2. 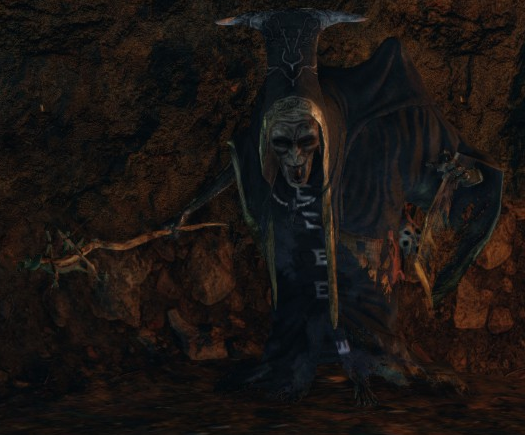 Black Hollow Mage will not only cast powerful sorceries at the player but will also reanimate nearby skeletons with necromancy. They will not respawn so killing them is top priority if you don't want to have to deal with an endless stream of skeletons. however, it implies that getting their hood, robe and staff is extremely difficult. however, they do respawn in Undead Purgatory as long as Executioner's Chariot is alive. Their white counterpart can be seen Brightstone Cove Tseldora, although their hoods are entirely different.

They used to be Drangleic Mages, but they are now tainted by the effects of Hollowing. Keeping to traditions of their old life, Hollow Mages' genders can be distinguished by the color of their robes; Black Hollow Mages are confirmed to be female, and they follow the Old King. Their duty is to resurrect the dead in the purgatory so the others can hunt for them for leisure. In contrast, White Hollow Mages are male. They reside in Tseldora and are conducting experiments on spider and sorcery; their roles are identical to that of the Channeler.

Unlike their counterpart in Dark Souls, which primarily uses pyromancy and reanimating the dead with no sigil, this time, they primarily uses sorcery, and every time when they reanimate the dead, they now have a gesture, a purple aura identical to Soul Geyser's charing smoke, wielded with both hand and plunging to the ground, in a manner of two handed strong attack, a purple sigil identical to the one from Heal miracle will appear (not the case in Beta), now the corpses are once again lived, oddly, you cannot perform the same moveset with their staff...

"The origin of these Necromancers is unknown, but it is possible that they served the Old King during the Undead Hunts in this forest. They are found near Skeleton Lords' domain - perhaps they now serve them as their new masters"
- Dark Souls 2 Collector's Edition Guide