Northwarder Set is an Attire or Armor in Dark Souls 2.


"Hood/Robe/Manchettes/Trousers of a Forossan sage.
Forossans venerated the god of war, and sages who led warriors into battle were called Northwarders.
Northwarders earned their title only after completing a great journey of great hardship, after which they would be worshipped as oracles of the war gods" 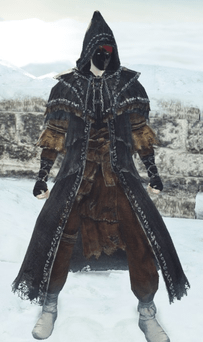