NPCs in the Undead Purgatory

To the right of the first bridge is a second, where there are two Hollows and an Executioner, deal with them quickly and on the ledge is a corpse with a Notched Whip, then follow the path where another four Executioners (replaced with Red Phantom Purgatory Guardians in NG+ onward) on tall pillars, two with whips, two with staffs. Deal with them one by one and head across the bridge where a red phantom with a Greatsword and shield is waiting (he only respawns in NG+ onward, drops Greatsword +3). A few things to note and some strategies to implement:

Defeating the Black Phantom nets you some souls and pride.

The mist door leads to the boss fight Executioner's Chariot. The fight takes place in a large circle with a gap in the floor to your right as you enter. You cannot cross this, however the chariot is able to ramp over it meaning it will continue going around the circle until stopped. A cutscene entering the mist shows a skeleton using a lever to open a gate to release the chariot.

Make your way to your left around the circle to get to this lever. Two Necromancers and a group of skeletons will attempt to prevent this, in addition to the chariot itself. Small alcoves on either walls allow you to avoid taking damage from the chariot as it speeds by. Skeletons often allow themselves to be taken out by the chariot but this won't matter until the necromancers are dead, as they will continue to revive them. The first Necromancer is on the left about three hiding spots down. The second is near the end of the circle on the right (almost directly across from the lever). After defeating them, hold up to see if any skeletons decide to creep up. The chariot should finish the job if so.

Pulling the lever causes the gate to come down and the chariot crashes, killing the driver. However, it is the two headed horse that is the real threat and that happened to survive -and you've just pissed it off. If you don't wish to fight the horse, you can also find a good sniper spot and used ranged attacks. A good aim, and lightning or magic, should do the trick. Don't try to lock on with lightning and backstep afterwards because you move forward when you use that. Eventually the horse will run down the cliff and the rider lies half dead nearby, attack him once and he will die. 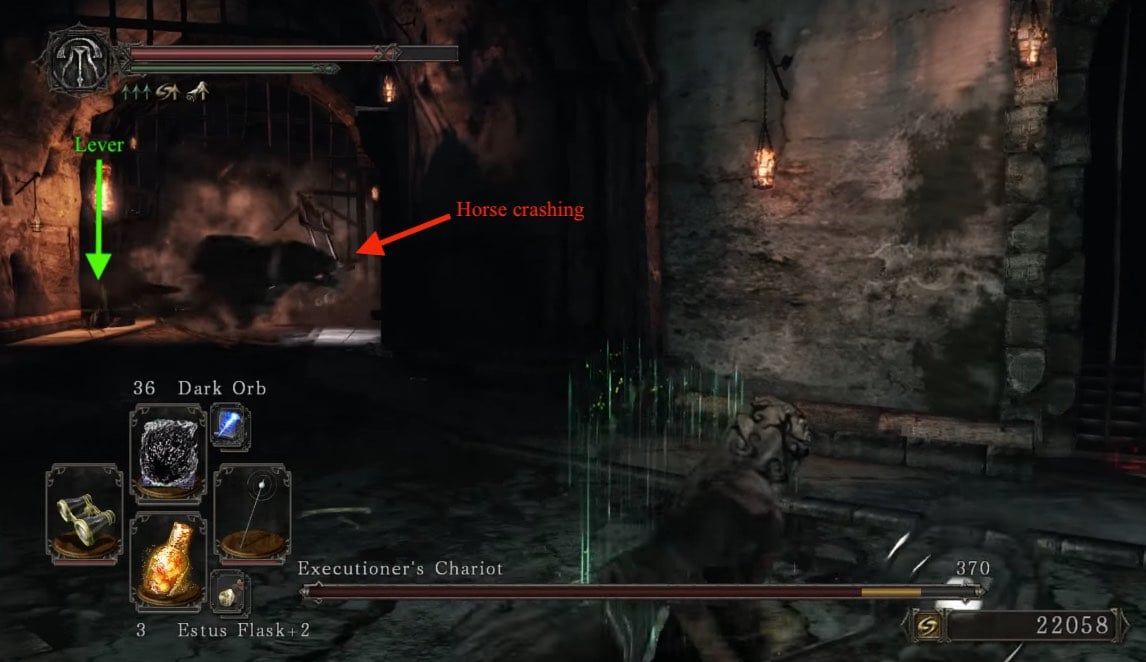 Defeating the horse allows you to freely loot the corpses scattered around the area. From the beginning of the area, there are four that all carry a Fading Soul. The last corpse is hanging off the ledge of the gap, near where you lowered the gate. That corpse holds a Soul of a Brave Warrior. Directly after the gate on the left is a door that leads to a staircase. At the top of the stairs, a small elevation can be seen. It can be accessed by carefully inching around the ledge from the top of the stair. A corpse on this ledge leads to 2x Cracked Red Eye Orb.

At the top of the stairs is a small room with three statues, a bonfire, and Gren, the covenant leader for the Brotherhood of Blood. He will allow access to the covenant to any player holding a Token of Spite, which is acquired by invading and killing another player (a found token will also allow you to join). 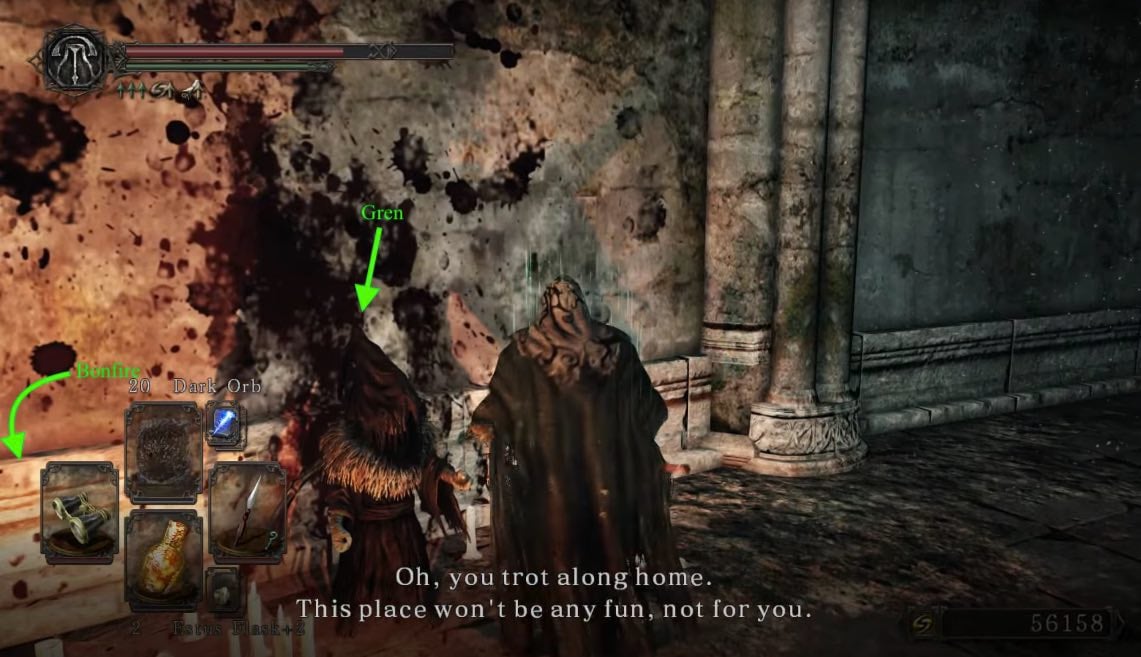