Official Announcement for Scholar of the First Sin [1]


We're very excited to announce Dark Souls II: Scholar of the First Sin!
Click the image to enlarge a comparison 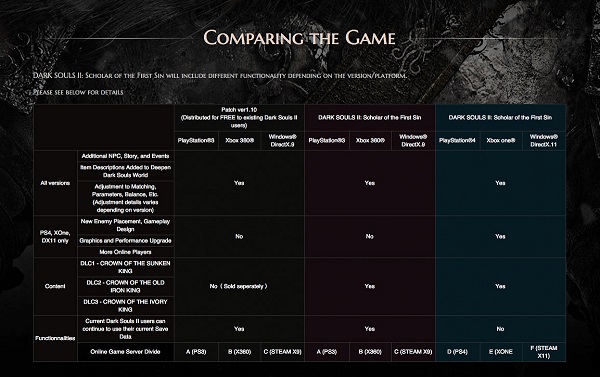 Dark Souls II: Scholar of the First Sin will include the three previously released DLC packs - Crown of the Sunken King, Crown of the Old Iron King, and Crown of the Ivory King - along with additional features.

All versions of the game will include the following features ( Existing Dark Souls II owners will receive a patch to implement these elements):


Xbox One, PS4, and DirectX 11 versions of the game will include the following features (in addition to those listed above):

Very Exciting! Join the forums for additional details and discussions on Dark Souls II: Scholar of the First Sin at FextraLife

Details translated from a famitsu interview by Tanimaru:

- A new NPC that will act as a narrator or guide. The NPC will be providing more story elements, and has an unusual form:

This NPC has a lot of knowledge of Drangleic, and will lead players "somewhere they've never been before". This NPC ties in to the subtitle of this release (Scholar of the First Flame). Tanimura mentions that we'll have to play for ourselves to find out more about this.

- There will be some revisions to the item descriptions. Supposedly, Tanimura mentioned: "Rather than make everything easy to understand or reveal the whole truth, our approach is more like dropping a few more hints that will spur the imagination of players". This means the item descriptions will still keep the same level of ambiguity as before.

Things related to multiplayer (not sure if these are for all versions, this remains to be seen):

- They're planning to make it so that players in NG will be able to connect to players in NG+ and beyond. Also they plan to "relax" the matchmaking requirements and "break down the barriers" by allowing players to self-adjust their total accumulated souls.

- The game will same level of detail that is available in the current Windows version (No word on the Windows DirectX 11 version yet).

- Tanimura gives an example of an area that will have its number of enemies increased. There will be more spiders in Brightstone Cove Tseldora: