Getting to Sinners' Rise

From the room that holds Straid's Cell bonfire, the door on the right of it is unlocked using the Bastille Key. In here, you'll find a skeleton with a Petrified Dragon Bone, and 3x Firebombs. The door in the cell leads to a hole dropping you down onto the bridge below; you can get to the same bridge from back in the room below Straid's Cell bonfire  (at the bottom of the stairs, a pull-lever opens an archway gate to the bridge, which is protected by three bowmen). Just outside this gate and to the right is a short path to a Royal Soldier, protecting a corpse with 8x Lifegem. After killing the soldier, you can sprint across the bridge to the fog gate and kill the Gaoler waiting there. Enter the fog gate to enter Sinners' Rise.

Once you proceed through the mist, there'll be multiple archers directly above you, ready to take aim. Quickly rush out the door and up the ladder here, to take care of it mano-a-mano. You may have also noticed the only bonfire in Sinners' Rise, The Saltfort bonfire - don't worry to much though, this area isn't massive. To the right immediately after you climb the ladder is a doorway with a very small ledge which holds a corpse containing a Large Soul of a Lost Undead. 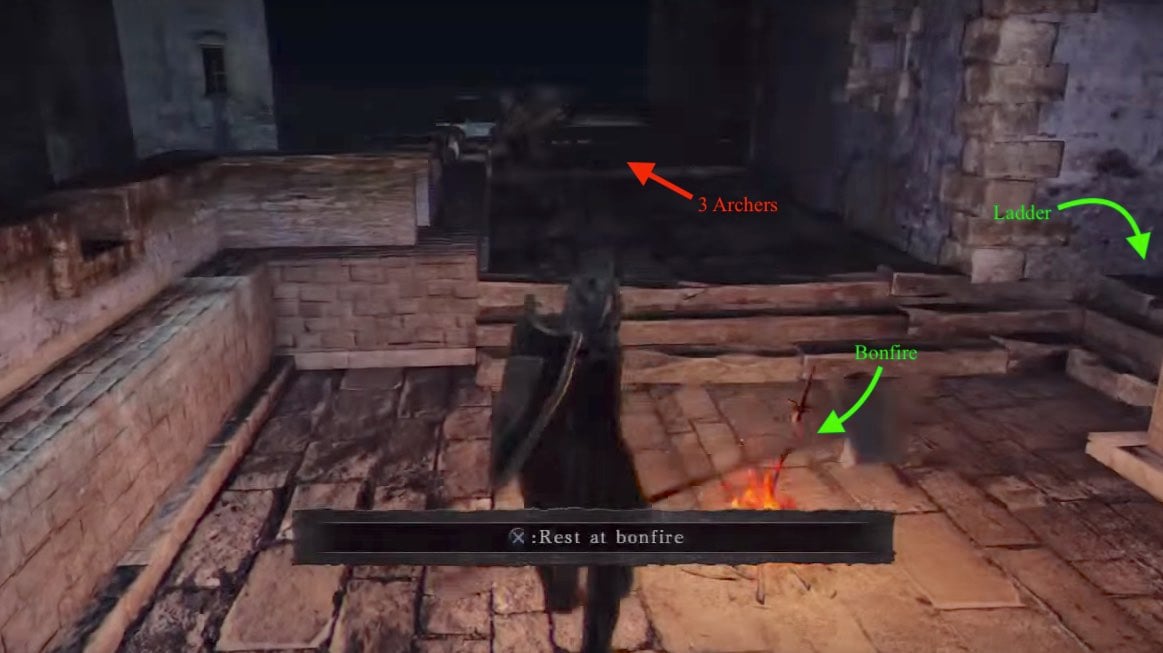 From the Bonfire go back down the ladder and continue down the stairs, taking out any enemies at the bottom. Before entering the doorway to your left, move around the edge of the building to find a broken part of the stairs, there is a corpse holding a Human Effigy there. Proceed into the building to arrive at its ground level. This floor holds a few royal swordsmen/archers. In the middle of the room you'll find a descending lift. While riding the lift down, keep an eye out for a platform just before you reach the bottom in which you can fall onto, to loot the corpse holding 5x Lacerating Knife here. From this platform, it is safe enough to jump off to the floor below.

You are now in a dark, water-filled dungeon area. If you are in Human form, the NPC Lucatiel of Mirrah can be summoned. Her sign is behind the lift you just rode. There are a total of 3 Undead Aberrations (huge, malformed, dragon-esque creatures), so here are a few tips and notes on these enemies in the area:

The first one will come in from the left, as soon as you pass the doorway. In the alcove the first came from is a corpse holding Sublime Bone Dust. On the alcove on the right enter the empty alcove where another Undead Aberration can break through one of these walls, so proceed with caution. Located in the left corner of the back wall is a Hidden Door accessible by pressing the "use" button. This door leads to outside, and a quite watery death should you move too far forward. Instead, look to your left and hug the wall to reach a corpse holding the Northern Ritual Band and a Bleed Stone.

Returning from the alcove continue on and watch both ways for the last Undead Aberrations. The alcove on the right has a Large Soul of a Nameless Soldier. Continue on and soon you will reach a set of stairs on either side of you, both lead to cells. There are a total of four cells, two on the ground floor and another two on the upper balconies. The second left cell on the watery level contains a corpse with a Pharros' Lockstone and a Soul of a Proud Knight. The one on the upper left level, second door (which can also be unlocked by the Bastille Key) leads to a corpse with a Fire Seed. You can kill the Knight for a Heide Spear, if you wish. The cell on the opposite side contains another Fire Seed. Be sure to take care of all the Rupturing Hollows before using the mechanism to lift the gate, otherwise any mummies you did spare will all come flooding in. Once the gate is lifted, a straight path will lead to the boss mist.

Before heading in, turn to the left and follow the narrow path between the stairs to reach a corpse with a Radiant Lifegem. You'll then find two sets of stairs on either side. At the top of both stairs are locked gates (on NG+ there will be a red Mummy in front of each door). Again, if you have the Bastille Key you can open these. In each room you will find a line of oil which you can light with your torch. Lighting both rooms will provide light in the boss area - highly recommended. The right hand stairway room holds a Smooth & Silky Stone. 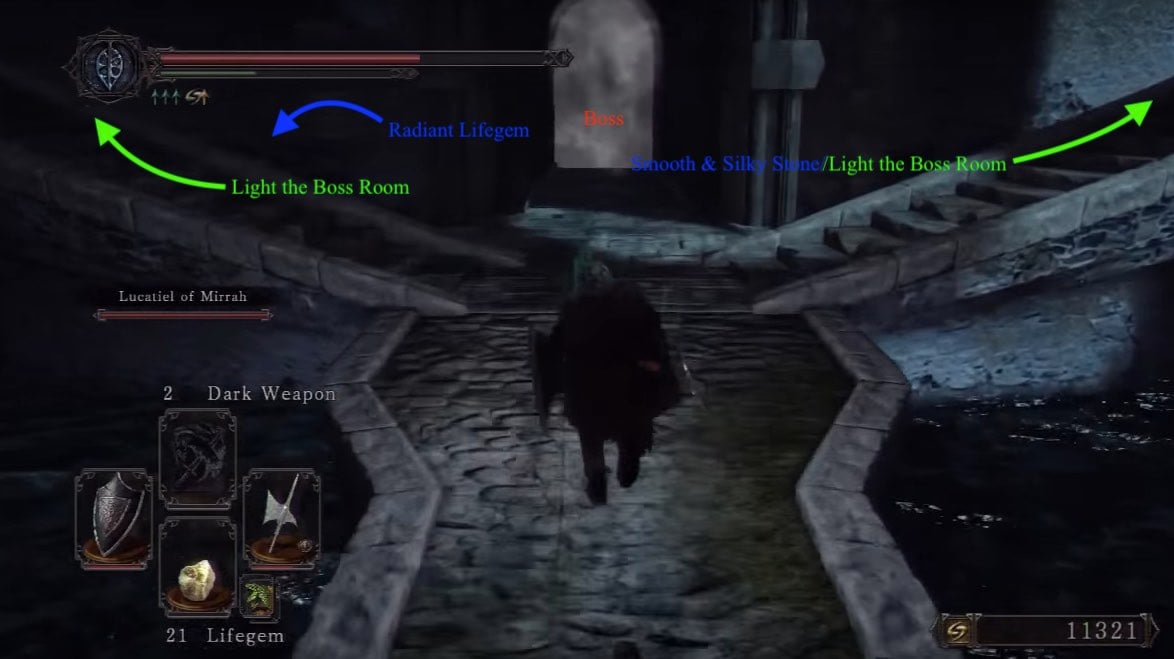 When you are ready, head to the boss' mist. 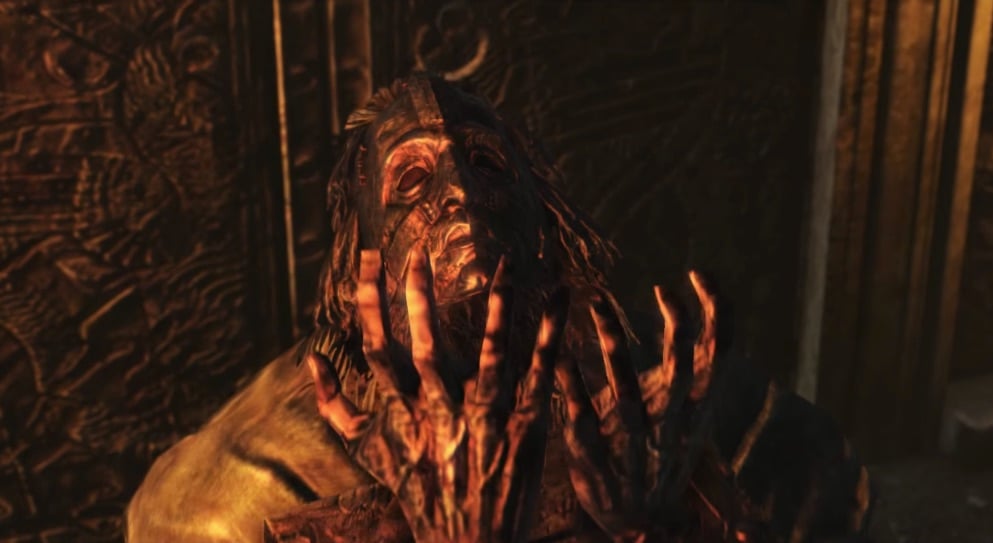 After defeating the Lost Sinner, open the door on the opposite side of the room and move down the stairs towards the Primal Bonfire. Before entering the room with the bonfire, you will find a chest to your left which holds a Fragrant Branch Of Yore  and an Elizabeth Mushroom. Be aware that the wall opposite of the chest isn't an illusory wall, people may leave countless messages but it isn't. The textures are just weird and ripped. From here light the primal bonfire to warp back to Majula.