Traps are Secrets in Dark Souls 2. They are generally environmental hazards that use surprise to kill or hinder the player. They can be considered things such as arrows that fire from walls, flipping platforms, spikes at the bottoms of pits, and anything that is believed to not really be an enemy but something that is just triggered. These effects can be triggered or activated by entering specific areas as you explore each of the Locations, but are mostly activated by interacting with an object whilst unknowingly knowing that it is a trap. Below lists information on the types of traps and objects that can be encountered while playing DS2 along with their effects and what to watch out for. 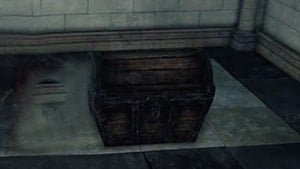 These Chest Traps are rigged chests disguised as regular loot chests. They are encountered through Dark Souls 2 and vary in effects depending on the kind of trap it is rigged with. These traps are designed to waste a players time or deal negative effects to the player when intereacted with. Below are the types of chest traps you can find in the game. 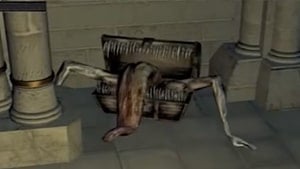 Mimics are Enemies disguised as a chest. High-damaging series of attacks, often fatal. Mimics are rare, and can be wooden or metal chests. They can be identified by checking for a lock on the front of the chest - if the chest has a large lock on the front, this indicates a Mimic. Always test a suspected chest by smacking it from the side with a weapon or spell; it will trigger the mimic without the risk of the player being grabbed by the initial attack, which is usually an instant kill. Mimics can also be tested by throwing a Lloyd's Talisman at them, which will make them yawn and fall asleep. The first 4 of the 5 Mimics in Dark Souls 2 contain pieces of the Dark Set.

Cursed Vessels that appear as stone jars are an irritating hazard that causes Curse buildup if you get too close. Their presence is always presaged by giggling and whimpering from their location. Ideally, break them from afar to avoid being affected by their effects.