This memory can be accessed near the area where you first meet Mild Mannered Pate, only after acquiring the Ashen Mist Heart in the Dragon Shrine. Head through the doorway adjacent to the room with five ballistae, then go to the right. 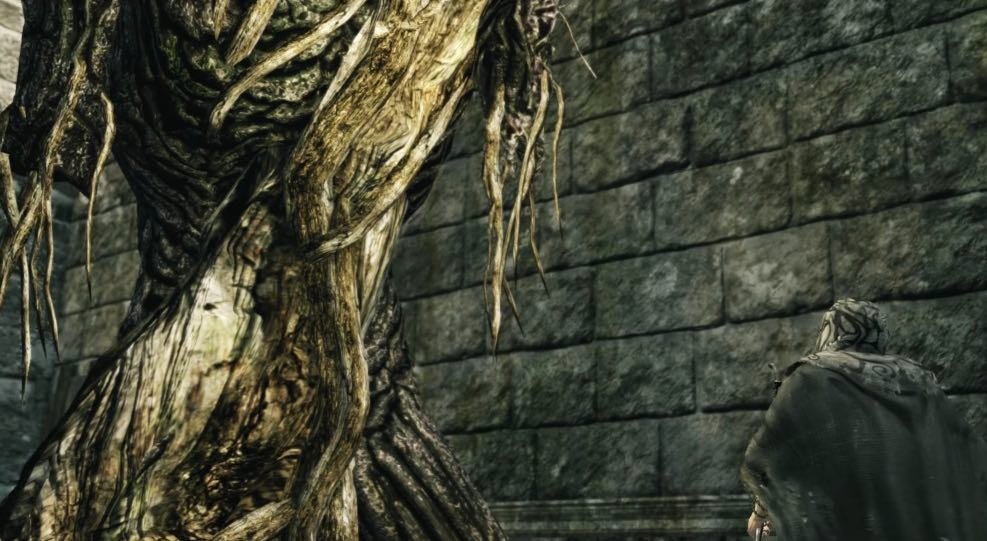 Message from the Captain

After entering, go down the long hallway into an area with several dead soldiers and Captain Drummond. Exhaust his dialogue for some lore and to learn the 'Hurrah!' Gesture, and speak to him once more after you have killed the Giant's Lord to gain Drangleic Helm. In this room, there are two doors, one opposite Drummond, and the other behind him. The one opposite holds 5x Smooth & Silky Stones in a chest, while the other allows you to continue. 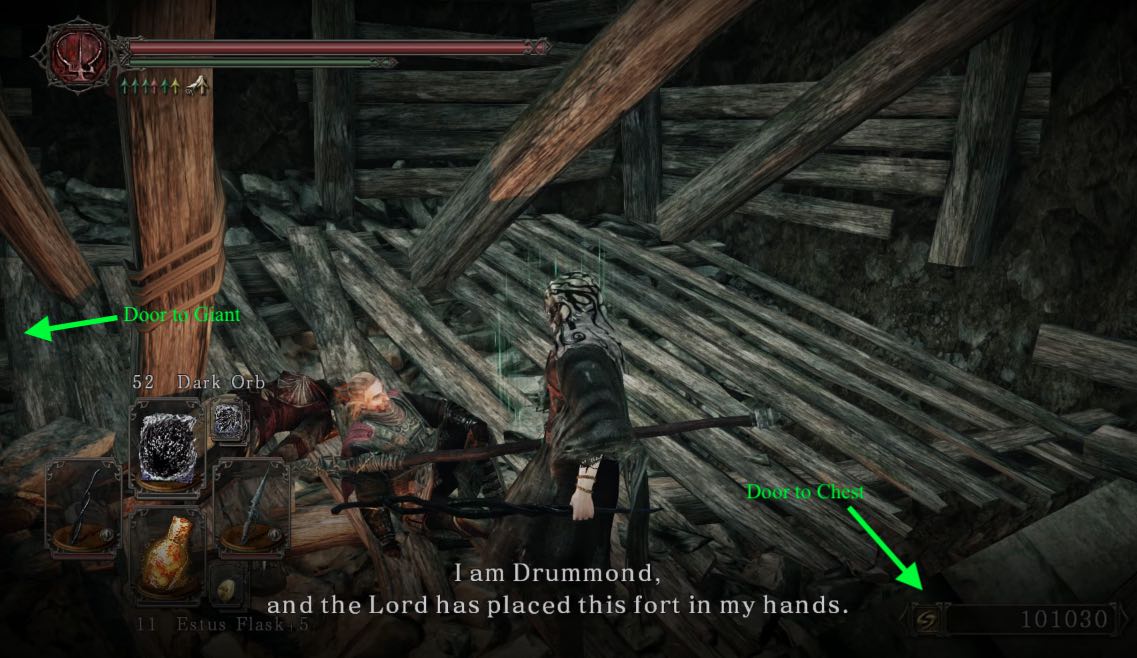 A Giant will attack the door to progress from the other side, but cannot reach you; you can use range to make easy work of him. It is possible, but very difficult, to run past every giant in this area, although it will take several tries and possibly several deaths to get all the items.

Memory of the Battle

At the end of the hallway with the first giant is a corpse with a Fire Seed. Head back and continue through the hole in the wall to arrive at an open area with a Club Giant and a Sorcerer Giant who uses poison. Ranged attacks are quite effective, yet again, especially if you use fire arrows. On the far left side of this room there are some wooden planks going up the wall with another corpse holding a Large Soul of a Brave Warrior, while on the right there is a doorway. 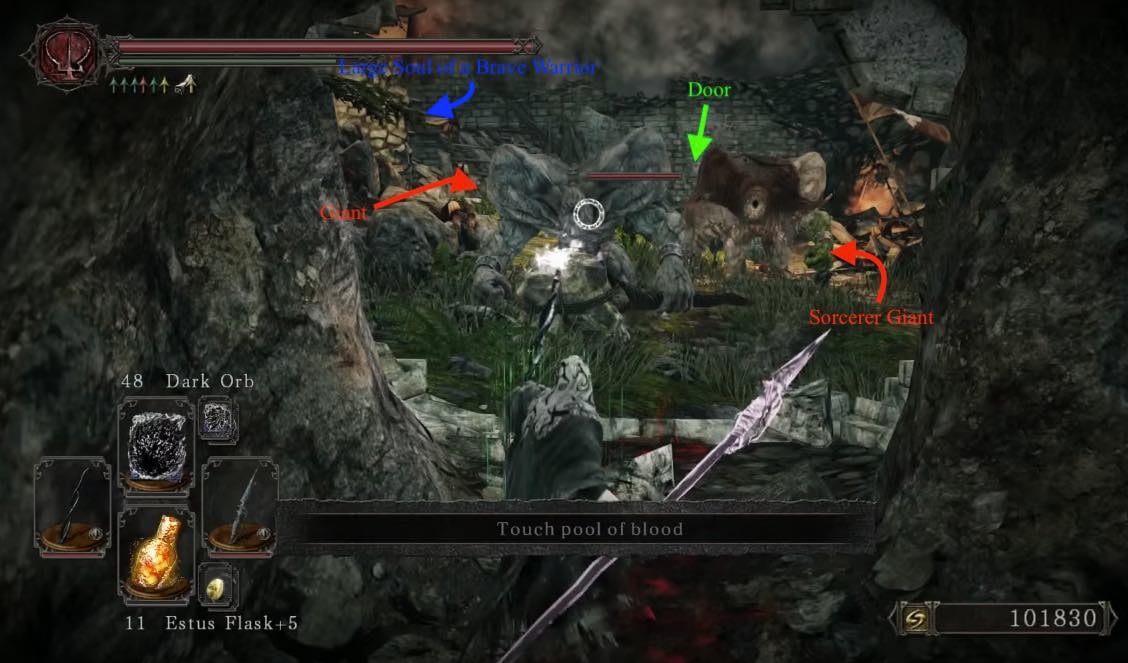 Continuing down the doorway leads to a large fight between several Giants, Royal Soldiers, and an Ironclad Soldier. All of the soldiers will eventually die and so will a few of the giants. So there is no need to engage too early, you can simply wait it out then continue up the ladder on the right. This takes you up to the rooftop holding the two Ranged Royal Soldiers and Sorcerer Giant across on the left rooftop, that will immediately assault you with fireballs. 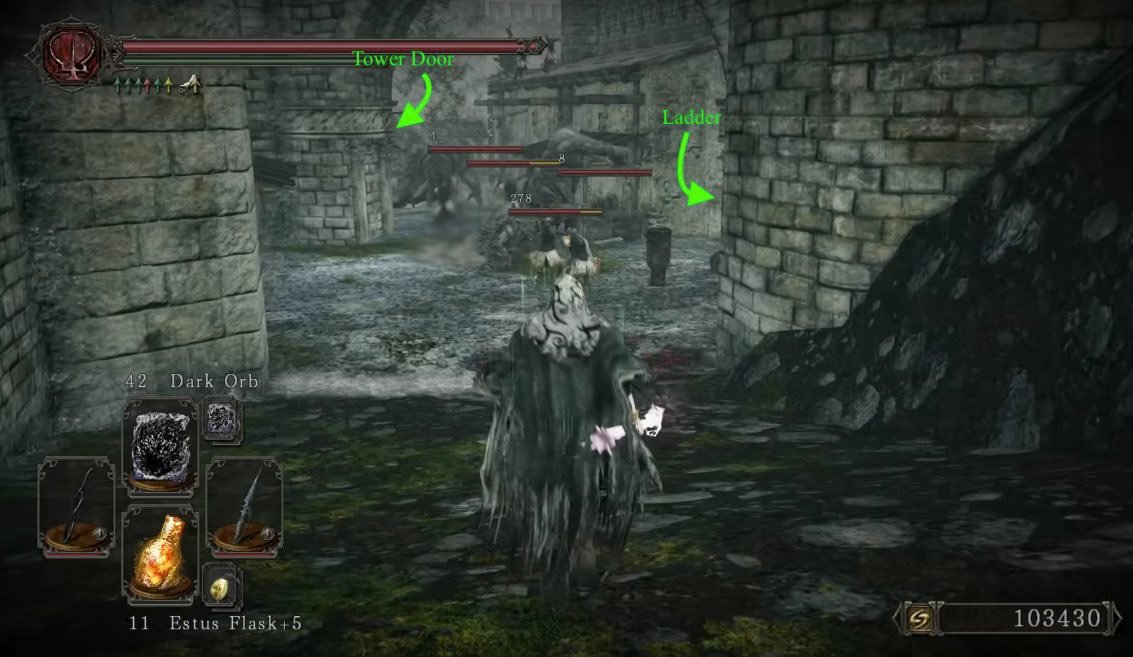 After clearing the area (or sprinting through it) there is a corpse on the right before you enter the tower with a Giant Warrior Club and Soul of a Great Hero on it. Continuing left of the tower will bring you to an iron chest with a Petrified Something. Inside the tower is a ladder you can climb to get to the opposite rooftop with the two sorcerer giants. There is a corpse with a Bonfire Ascetic behind them in the corner.

Go through the back room of the tower and take a left; there is another corpse in an alcove with a Crimson Water, and up the stairs is another item and a Dual Club-Wielding Giant; be cautious as his attacks will go through your shield. There is a Soul of a Great Hero and a Torch on a corpse draped over the edge of the platform, and a dead giant slumped against the door that can be examined for a Soul of a Giant and your exit of the Memory of Vammar. 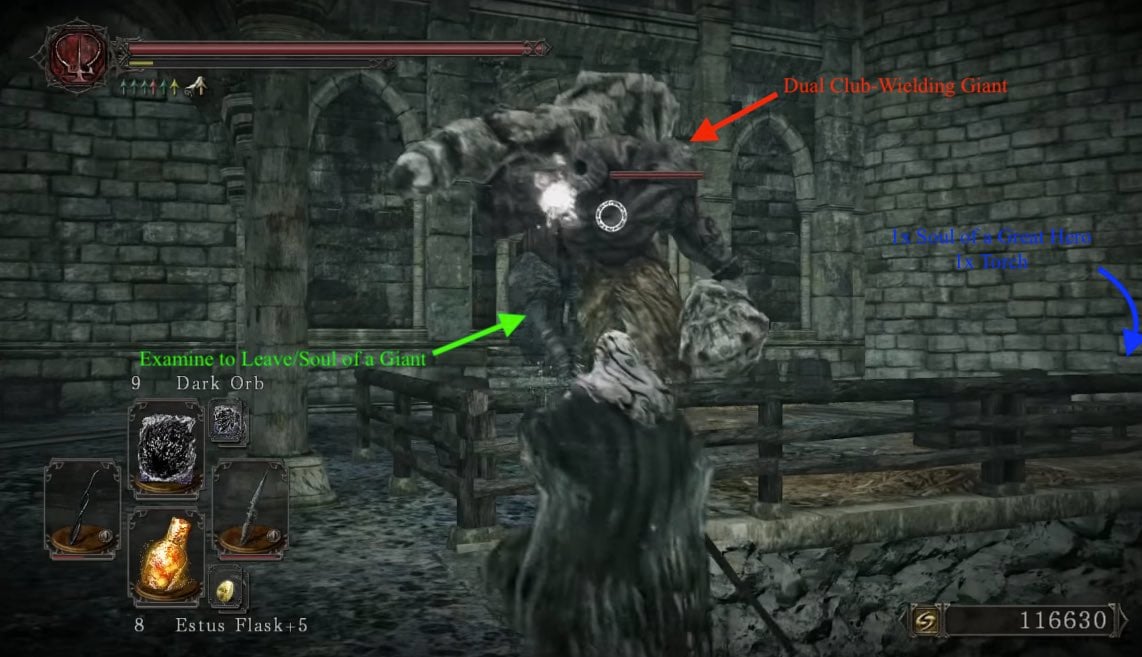 It is also possible to run through the area only killing two Giants: the first one in the corridor, and the last one guarding the exit. You can literally just sprint past everything else. As for escaping the giant battle, simply hug the left wall and sprint through here too. It's possible to complete the whole area in about a minute!

If you're feeling extra passive, it's also possible to run through this area without killing any Giants at all. To avoid killing the first one (who breaks through the door), once he has broken the door, back off behind Drummond and the Giant will begin to retreat, giving you ample room to sprint around him. Couple this with the above methods, and you can avoid all combat whatsoever. You can also wait a couple seconds before running down the starting hallway to Drummond. The first giant seems to get bored and wander down towards the hole instead of smashing and camping the doorway. As for the last one, a cheeky lure and juke then a race to examine the dead giant should be enough.