Velstadt's Set is an Attire or Armor in Dark Souls 2. Armor sets do not provide specific benefits, so players are free to mix and match their preferred parts to optimize their Builds.

"Helmet/Armor/Gauntlets/Leggings worn by the Royal Aegis. Originally imbued with the power of miracles, now soaked with dark after extended exposure in the Undead Crypt.
A knight from a faraway land was lured to this accursed land, but forgot even why he came, eventually reduced to a shadow of his former self." 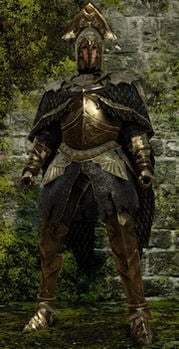