Undead Aberration (Enhanced Undead) is an enemy in Dark Souls 2. 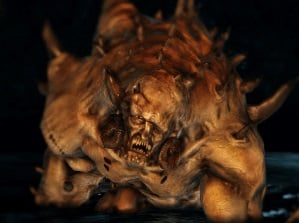 Grotesque monstrosities found wading in the dark water in Sinners' Rise, they attack much like the Titanite Demons from Dark Souls; they are slow but can hit extremely hard. They have a massive resistance to magic and fire damage, and also seem to resist lightning. They are not resistant to poison or bleed damage. They are difficult to fight in the water, but can be lured over to the elevator platform where one can hit them with ranged attacks or bait them to fall into the hole.

They're believed to be Lord Aldia's attempt on recreating the dragons, these test subjects are either failed attempt or the the first step of mutation, since their bones are formed in the shape of a dragon.

This deformed, unnatural creature must surely be the product of some serious misdeeds. Who created this monstrosity, and is it what they intended to make? It almost seems to be half-dragon, but, whatever it is, it has a mind of a Hollow

Being a member of the Bell Keeper Covenant will make the Shield and Bow drop with very high frequency.