Hollow Mage (White) is an enemy in Dark Souls 2. 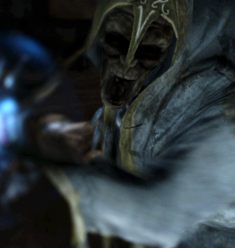 Hollow Drangleic mages encountered in Brightstone Cove Tseldora. Whether they were there before the town's destruction or moved in afterward is unknown; what is painfully clear is that they have no intention of allowing visitors to leave the ruins alive.
Their true origin is unknown, as with their old practice, they wear different robes according to their gender, Hollow Mage is confirmed to be male.
Sorcerers that will continually spam blue magic orbs at the player and will cast a series of smaller, faster orbs when the player gets close. To kill these from a distance and reduce the threat in the area, use either a bow, or catalyst/chime paired with binoculars. This way you can kill them safely. their moveset is same as their black counterpart except they cannot resurrect nearby enemies.