Someone needs credit for this map--I only posted it.

Reaching the Frigid Outskirts is as simple as heading over to the Expulsion Chamber Bonfire and just behind it, there's a coffin. Examining it will make your character jump into it and slide off of the cliff. 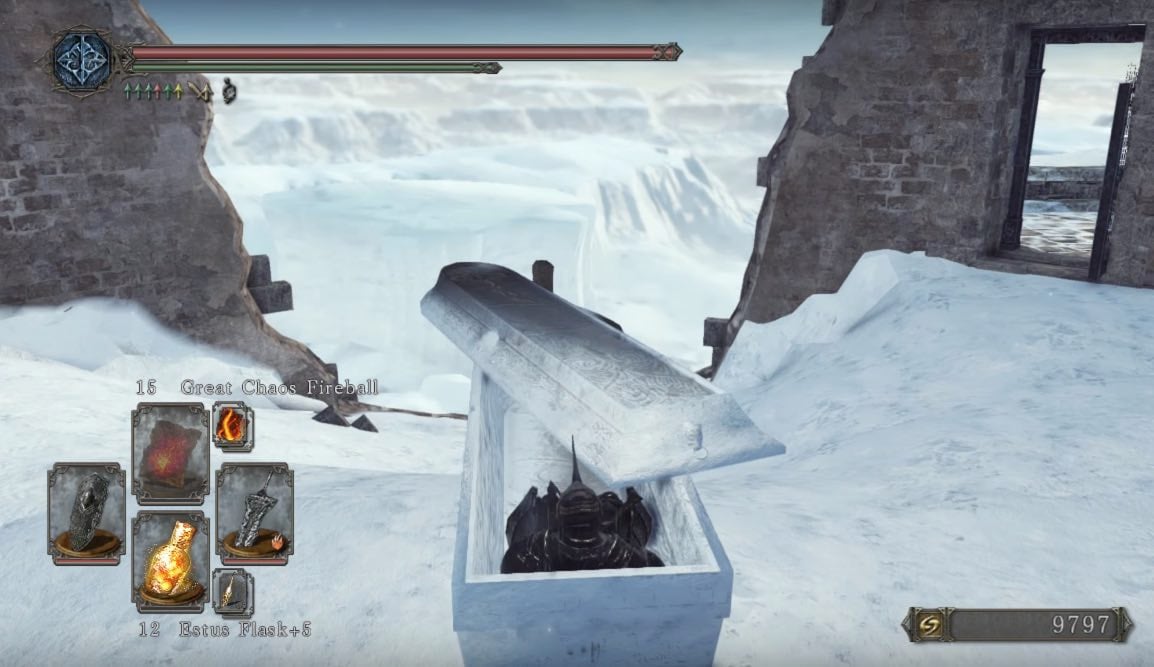 You'll emerge in an area with a recurring blizzard, as well as the constant Frozen Reindeer (aka Horses) spawning throughout the area, making navigation in this area extremely difficult even with the help of Prism Stones. When exiting the coffin, head southwest from where the camera is initially angled to arrive at a summoning circle area, where you can summon Head of Vengarl, and Abbess Feeva. One can also summon Manhunter O'Harrah in the Scholar of the First Sin edition. 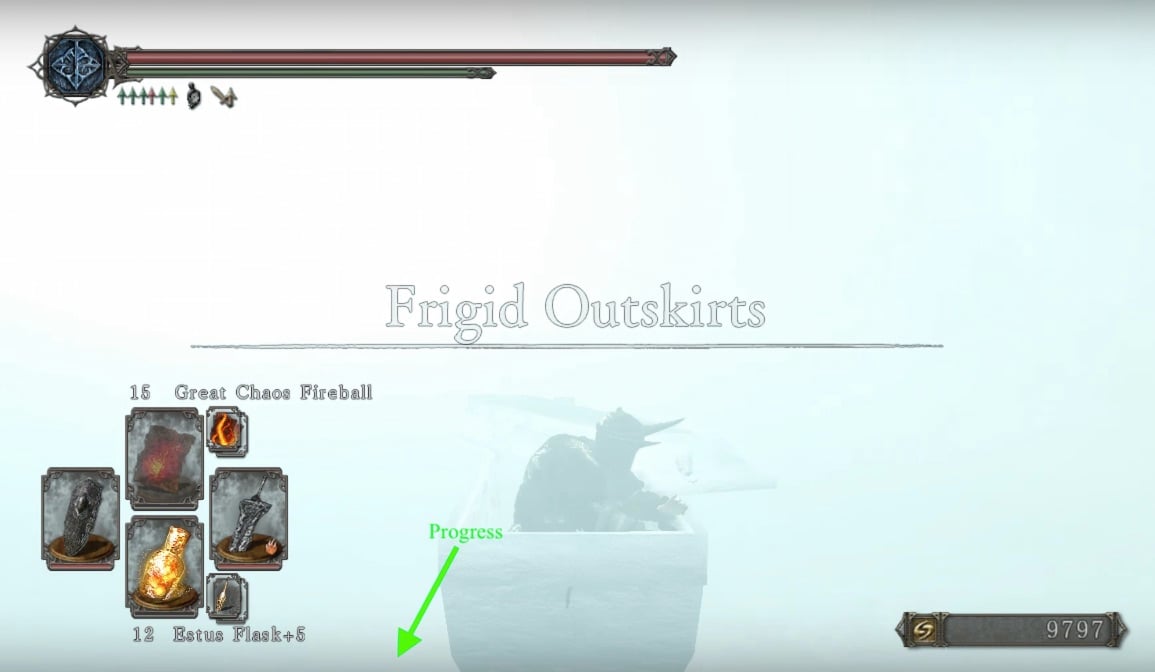 TIP: When traversing between structures and ruins, you'll always be able to see the next one in the distance. Once you set off for it, it is very important that you make a beeline for it, without falling off-track. This is because the blizzard will return as soon as you leave the summoning circle, and will block your visibility of the path ahead. There are three buildings throughout the map with some loot.

The second building to the boss contains a healing spring activated by a Pharros Lockstone. This is especially useful for healing NPC phantoms; although, you have to get them to stand down in the water. They have a mind of their own, but getting them to lock on to you helps: you can herd them into the area, as you may have done to the Barrel Carriers in the Crown of the Old Iron King. 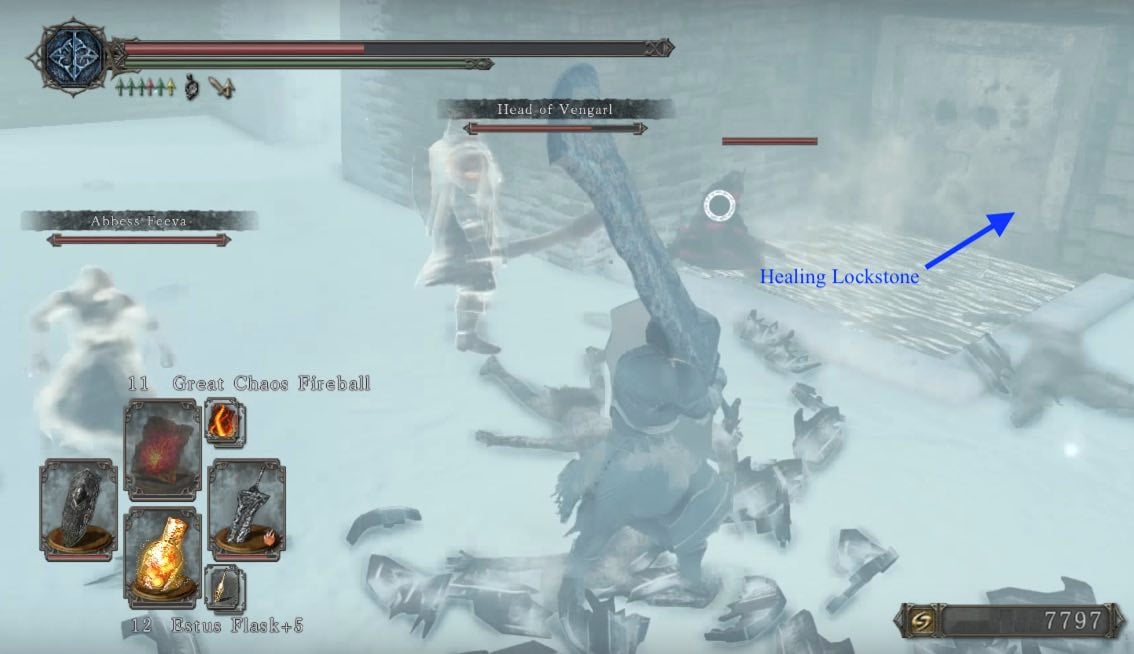 When you arrive at the third structure, you'll have to pass through a very short valley to reach a thin, icy bridge. On the other side is a fog gate to the boss encounter. However, you'll have to defeat a large Lance-wielding NPC invader, halfway through the bridge, in order to get to the gate. Avoid getting knocked off of this thin bridge; his lance has the ability to break your stance, or that of your NPC companions. 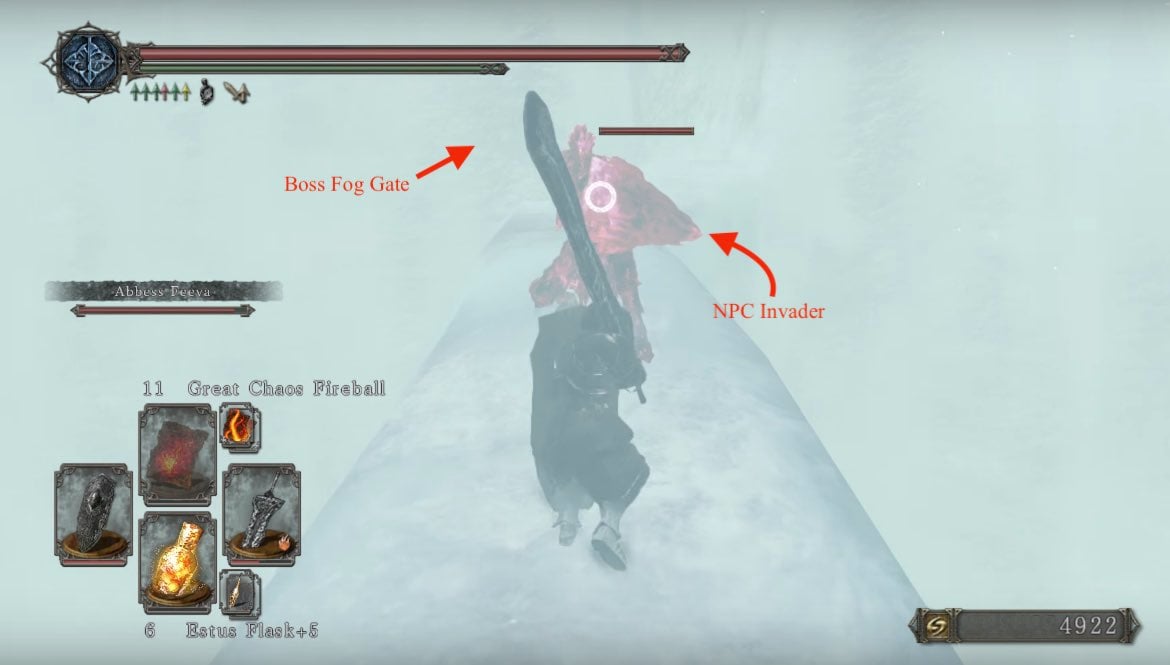 Once you've defeated him, continue forward and take on the boss- or, bosses- of the Frigid Outskirts.

Once they have been defeated, you'll receive the Soul of Lud and Zallen. Head through the doorway ahead and continue forward, until you reach a thin beam of light. Examine it to return to the bonfire by the coffin, in Frozen Eleum Loyce.