NPCs in the Iron Passage

Obtain the Tower Key from Brume Tower to gain access to the Iron Passage. 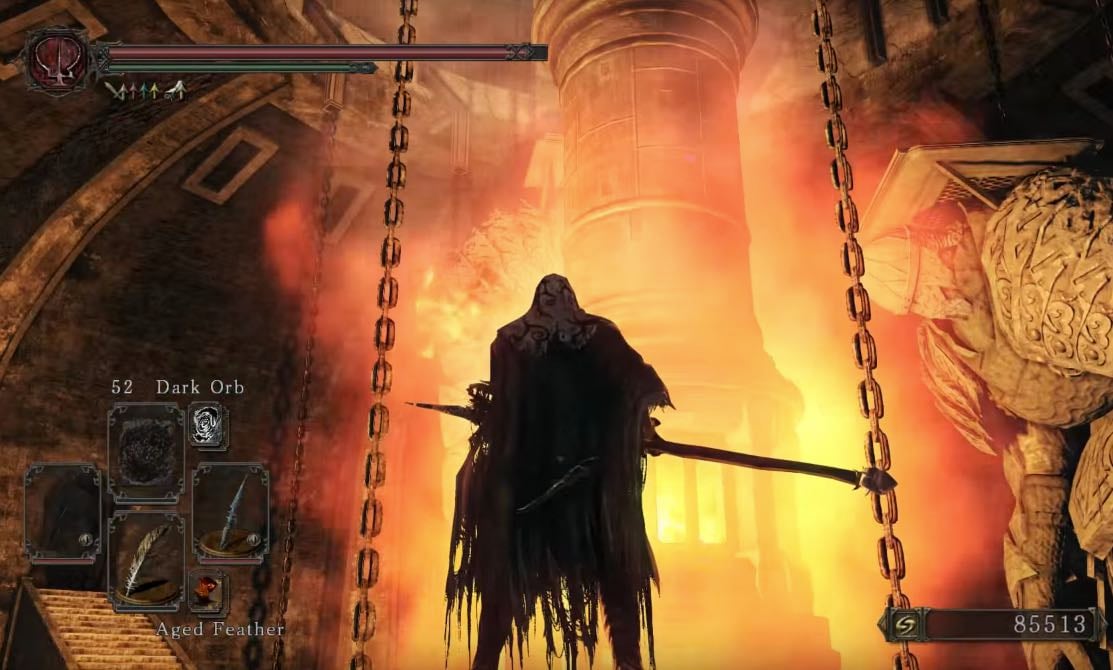 From the Foyer bonfire, take the elevator that goes down then use the Tower Key on the small metal door. Head down the two staircases then pick up the 2x Twilight Herb on the right, before you  take the elevator down. Once down, enter the doorway to prompt the "Iron Passage" title, letting you know you've arrived.

Light the Iron Hallway Entrance bonfire, then drop down to the next floor. This is one of the areas where summon signs are available for players that don't have this DLC can be summoned, as well as the NPC summon signs for Steel-willed Lorrie and Drifter Swordsman Aidel.

Continue to find a lever, a path ahead, and a path to the left. Pulling the lever opens the cell doors in the path ahead, and will release 4 Ashen Warriors will be released, after killing them the last cell to the right will contain a corpse holding 7x Large Titanite Shard. This lever has another use that is not essential to complete the area, and will be described under "Optional Content".

Take the path to the left and drop down the hole. Around the corner is a room with two more Ashen Warriors, and a  Fume Sorcerer providing lightning cover fire for them, when you engage. You will see an item in a body out of reach, ignore it for now. After killing the enemies, head through the doorway and drop down again. You'll find another drop with an Ashen Warrior waiting below, drop and kill it. Continue to the next room with the Sorcerer, a Possessed Armor, and two Ashen Warriors (one of which hides in an attempt to ambush you). After dealing with them, continue to yet another drop. This final room contains a Possessed Armor, a Sorcerer, and an Iron Warrior. After killing them all, pick up a Dried Root from the body and enter the mist to fight the boss. 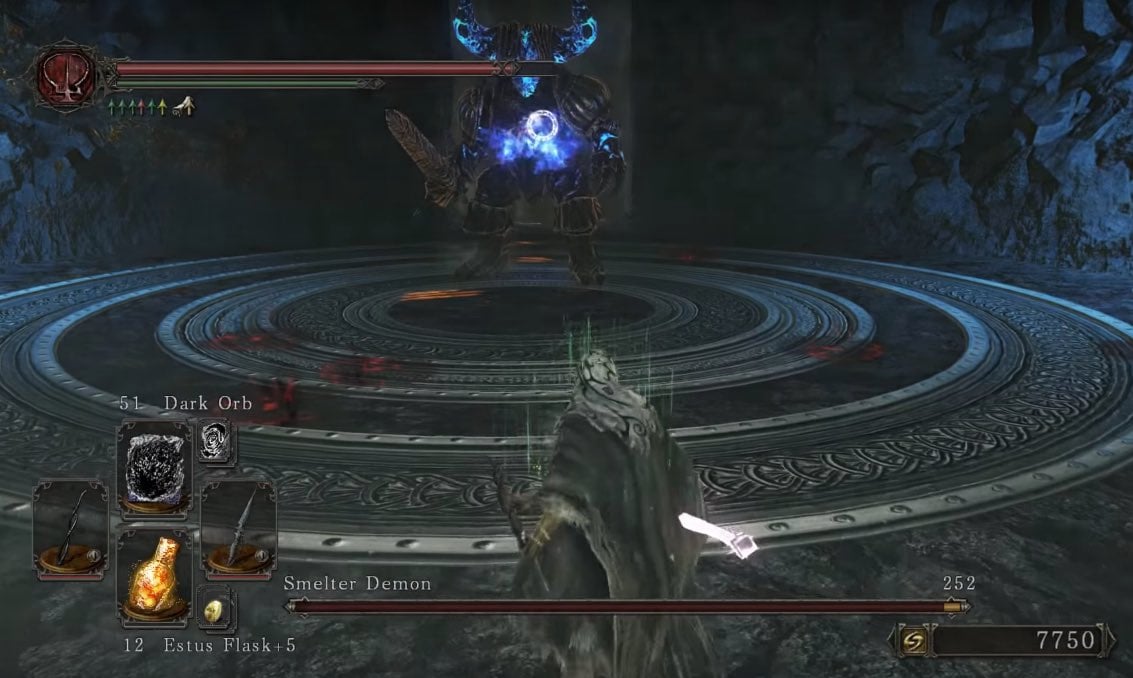 After defeating the boss, continue to the next division and pick up the Pharros Mask from the corpse. Take the elevator here, and drop down to the walkway to find yourself back at the entrance of Iron Passage.

It's worth clearing one room at a time, then feathering back, since you can earn a lot of souls as well as collect the Jester Gloves and Covetous Serpent Ring; it's also a very short distance from room to room, and dying deep feels bad when you've collected 40k souls. It also means you only use one effigy, if you're bringing the summons along. Consider using the NPCs, combined with Aged Feather & Black Separation Crystal. It's considerably safer. They'll always take the low path. And if you take the high path, they'll just rush to the last room.

Clear the Skeletons. It's worth just doing this 12 times if you want to clear the run easily. Once they're stop respawning pull the lever, and run down the corridor, ensuring to hug the right wall. Roll through the first two fireballs, and simply run past the remainder. You'll drop into a pit with the Priestess and Sorcerer through a doorway.You can then take on the Warriors, and feather back, or stay on this path.

It is not possible to get all items in this area in one run. You will need to use Aged Feather or Homeward Bone, and rest at a bonfire a few times to reset the area and come back for missing items.

The lever in the first room that open the cells, also opens the grate at the end for the stone lizard to shoot fireballs. If you pull the lever and run (and manage to dodge the fireballs) you can go past the grate before it closes and have access to the upper areas with items you could see, but not reach. Even these upper area have many enemies, which makes it more challenging than the lower areas. 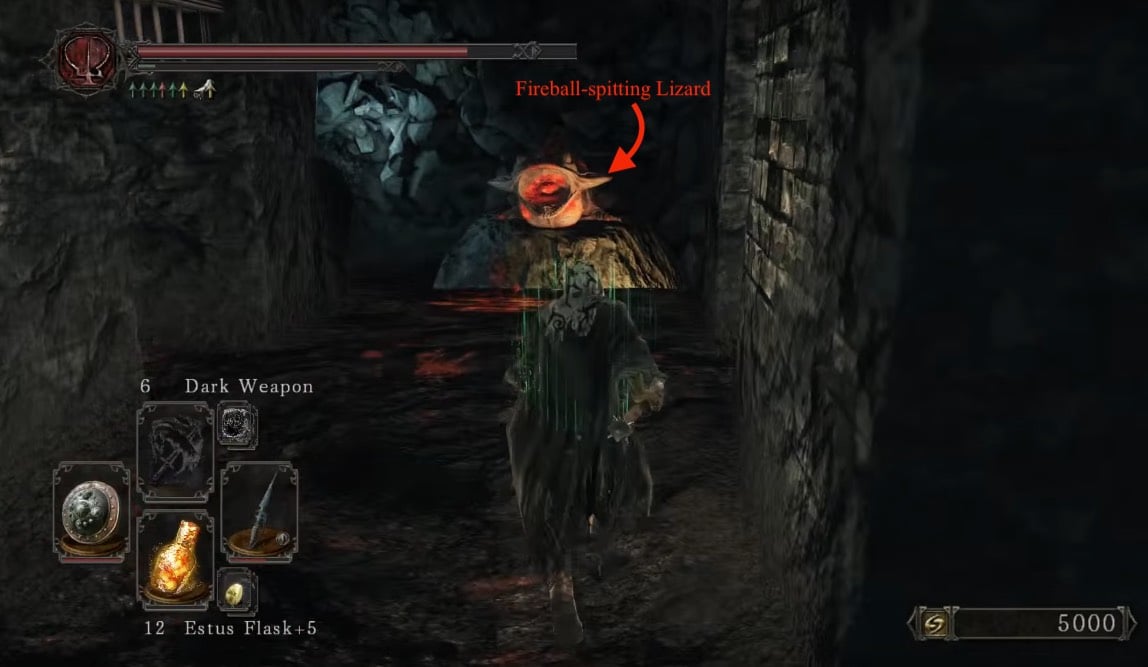 When you manage to run past the closing grate, an Astrologist will be waiting for you. Deal with it, and go left to face the Fume Sorcerer and pick up 2x Crimson Water from the body at the end.

Head back to where you dropped but this time, head forward. You will see another lever, and a Fume Sorcerer will emerge. Kill the sorcerer and look ahead of the lever. Its another block of cells with a grate and a salamander at the end. The two bodies holding items in the cells, but to pick those up you can't progress more in this area, you will need to return to the bonfire to reset the area and come here again.

If you open the cells, you'll find three Ashen Warriors, a Simpleton's Spice, and 5x Torch. If you decide to run past the grate, you will find yourself in a room with 2 exits.

If you are summoning help, or being summoned, Iron Passage becomes a lot more manageable. Rather than choosing one path, it is best to split up, with two players passing through the first gate, while the other two, preferably the host and either another player or an NPC summon, stay behind and go through the "main" route using the passage to the left.

The two players going through the gate can simply wait next to the gate while the host pulls the lever. The two players taking the high route can split up a second time at the second gate, with one going through while the other pulls the lever again. Doing this allows all of the enemies on each level to be engaged directly, and doesn't require anyone to attempt to dash through the gauntlet.

If you have less than four players, it is generally better for players to go through gates when possible, since the players on the higher levels can easily support the player on the lower level with archery or spells once they have defeated the enemies on their part.

Also note that, if you are the host, it is preferable if you don't engage the Iron Warrior outside the boss gate until the players on the higher levels have dealt with their enemies, and are able to come down and assist. Remember, if a phantom dies, you're down one phantom, but if the host dies, it's all over!