NPCs in the Shaded Woods

Area begins after the player opens the gate originally obstructed by the petrified Rosabeth of Melfia. Pulling the lever will open the cells in this room, and three Forest Grotesques and a Dwarf will fall and attack you. Defeat them then head to the door on the left at the bottom of the stairs to light the first Bonfire. The room to the right of the stairs holds a Chest containing an Estus Flask Shard. Head up the stairs and jump onto the left ledge (the right ledge holds nothing of value), then circle around to find multiple doors, some may contain more Grotesques, and one holding a corpse with items a Soul Of A Proud Knight and a Human Effigy. Back at the top of the stairs continue on into the Shaded Woods.

Up ahead are two more Grotesques and a corpse holding Fading Soul. Continue until you approach a clearing with multiple Grotesques, some of which are on the ledge above to your left and will throw rocks at you. Move up the hill and turn sharp left and walk along the ledge the Hollows were on. At the back end is a corpse holding a Pharros' Lockstone. Grab it then turn around and head on. You will eventually reach a crumbling building, containing the second Bonfire. Up the stairs are 3 different doors that lead to 3 different paths: 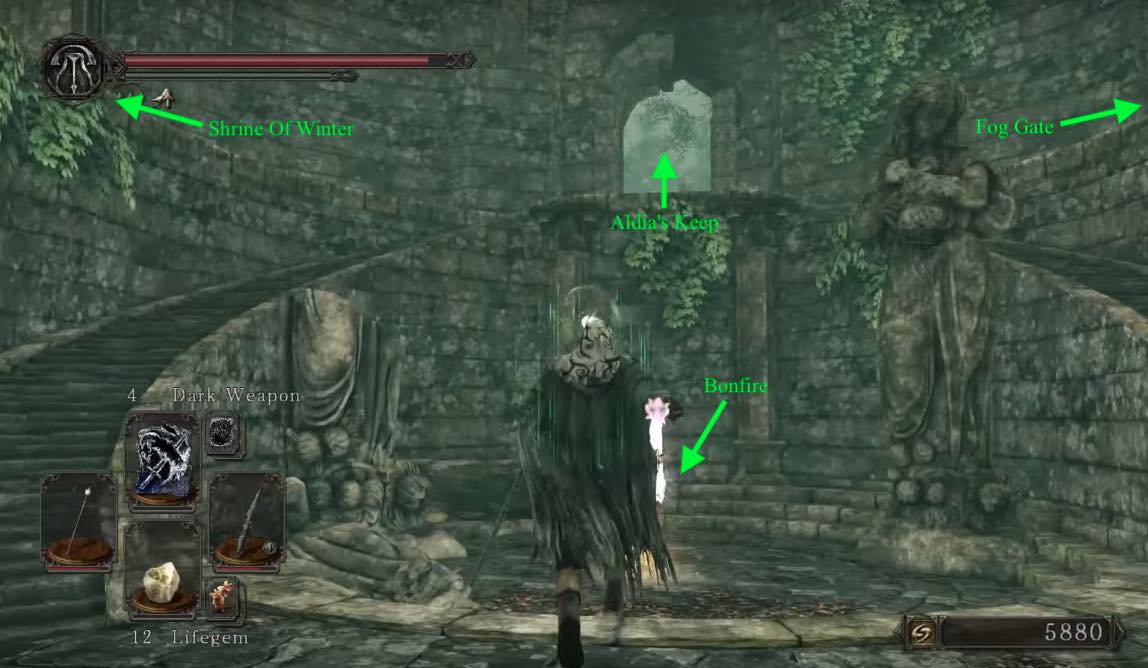 Enter the mist and move forward hugging the left wall going up hill. You will soon reach corpse behind a tree that is holding a Soul Of A Proud Knight and a Human Effigy. Continue onto the high left path to reach NPC Head of Vengarl. Exhaust his dialogue to receive Vengarl's Helm then circle around the outside of his alter to find a Fire Seed. 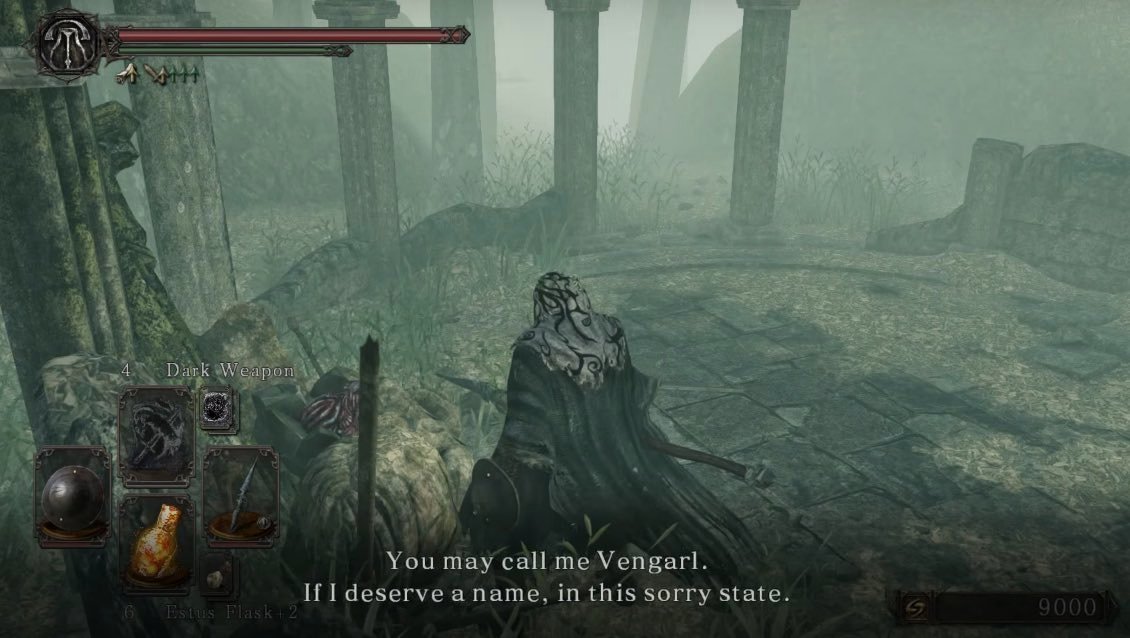 Head back down the hill to reach a corpse holding a Soul Of A Nameless Soldier and a Radiant Lifegem. Beware of the Ghosts of the woods, they are hard to see and can't be locked on to. Head back right until you reach the entrance. This time head straight through the trees. Its near impossible to describe exactly where the following items are, but somewhere in the middle of the area, are corpses with a Soul Of A Nameless Soldier, 2x Amber Herb, and between two trees lies a chest containing the Clear Bluestone Ring +1. Beware as there is also at least 1 Urn that emits Cursed Gas here, as well. Follow the closest wall back to the starting area.

From here hug the right wall and follow it religiously. Soon enough, you will reach a corpse holding 2x Lloyd's Talisman. Continue on and you will soon reach a small hill with a Chest at the top containing Old Sun Ring. Ahead is a cliff edge so be careful. If you have not found the chest with the Clear Bluestone Ring + 1 yet, head in the direction the chest you've just opened, is facing, and you will eventually encounter a facetree. Continue past it and run a bit more to see an iron chest on your left next to another facetree.

Follow the cliff along to the left and you will soon reach a small pathway leading uphill towards the left. At the top is a chest containing Chloranthy Ring +1. Note that this is an excellent spot to tunnel the Ghosts -just wait here with your shield up, and take them out in a single file. Directly from the chest, Drop down from the path and keep moving while hugging the right wall. There will be a steep hill to your right which eventually brings you to a stairway.

Keep heading up, and behind a broken make-shift ramp on the second floor, there is a Bonfire. The Forlorn may invade you shortly after this bonfire. At the very top is a corpse holding a Radiant Lifegem. From the bridge, jump toward the glowing hole in the far wall on your right. Break the Curse Urn before it curses you and head left to reach a corpse holding a Soul Of A Brave Warrior and 3x Firebomb.

Head back up the hill to the fallen tree. If you have a Fragrant Branch Of Yore, unpetrify and defeat the nearby Lion Warrior to receive the Fang Key. This grants access Weaponsmith Ornifex ahead. Go across the fallen tree to reach the bridge you leapt off of previously. Halfway across, near where you jumped off, find a ramp on the left leading to a lower room and a Ghost sitting against the wall, guarding the ramp. Within is a Chest containing 10x Magic Bolt.

Head back up and continue across to find another Curse Urn above you, just out of sight. Break it if you have the means, or just quickly run past and up the hill to the left. You will come to an area with multiple Curse Urns. There are a few places to go from here so, once again, we will be using the main entrance from the bridge as a direction reference so assume each start from there. 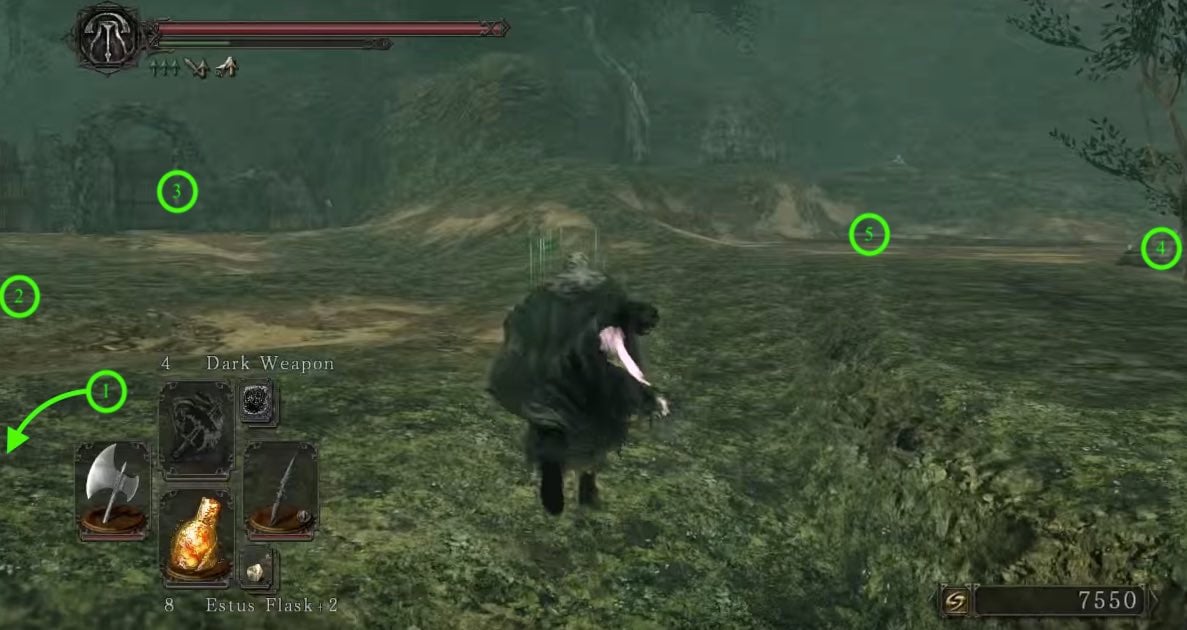 Head across the bridge once again. Return to the wooden platform which you broke previously and find a Ghost above a corpse, and another one hidden near in a tree. The upper pathaway holds no items so there's no incentive to fight them -unless you are Bill Murray. In the ruins to the right, you will find a Basilisk and another petrified Lion Warrior blocking the entrance to a chest which contains a Fragrant Branch Of Yore, the Lion Mage Robe, Lion Mage Cuffs and Lion Mage Skirt.

Head to the ruined building across from here. There is a grassy area and a few trees to the right which has another collapsing floor near the left corner. This will drop you onto the ledge in the with NPC Darkdiver Grandahl  and a chest containing the Homing Soul Mass. Exhaust his dialogue to further help your progress in joining the Pilgrims Of Dark. 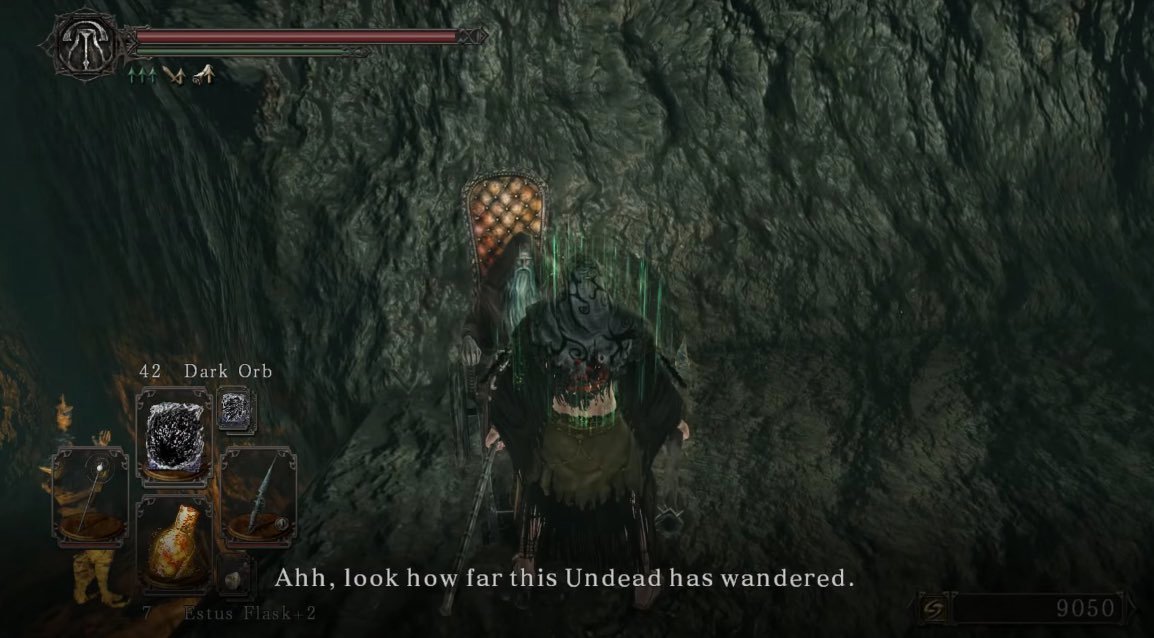 Drop down and head out the hole in the wall once again and return to the ruined building right next to the fallen grassy floor. The door all the way right has a staircase winding up. Upstairs approach the NPC Creighton the Wanderer who is resting against the wall (he is here only if you have previously spoken to him in Huntsman's Copse.) Exhaust his dialogue and loot the corpse here holding a Soul Of A Brave Warrior and a Skeptic's Spice. Go down to ground level, face the ruined building and head through the large archway in the middle, where the Bradley of the Old Guard summon sign is. A Great Moth clings to the back wall of building, dispatch it if you wish, then continue up to reach the Boss Fog. 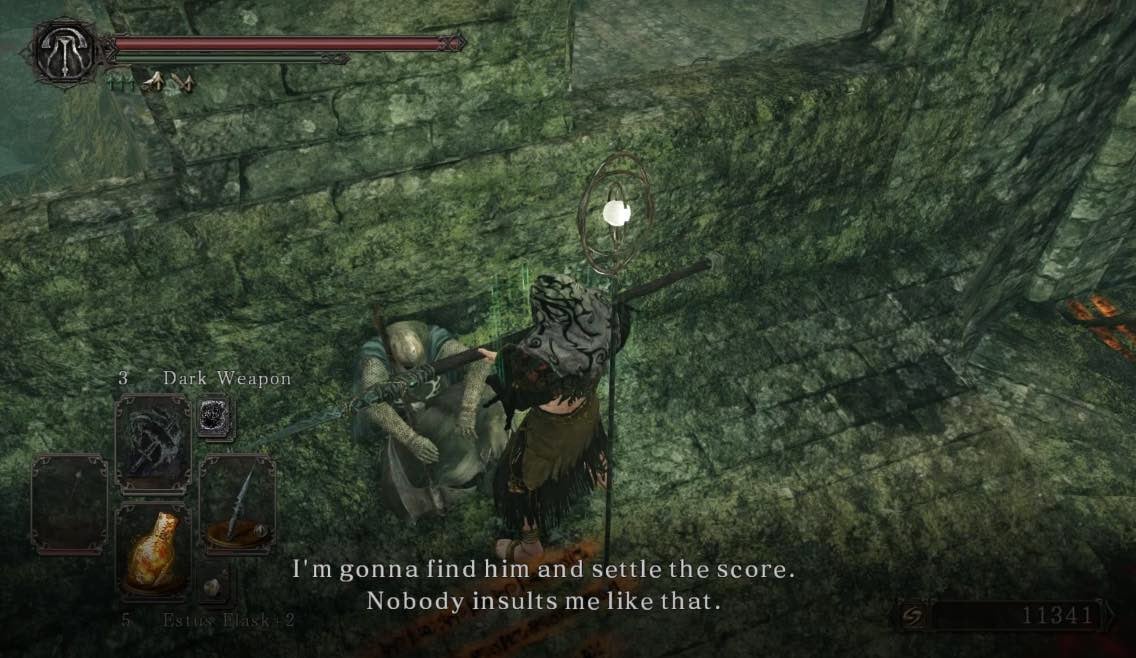 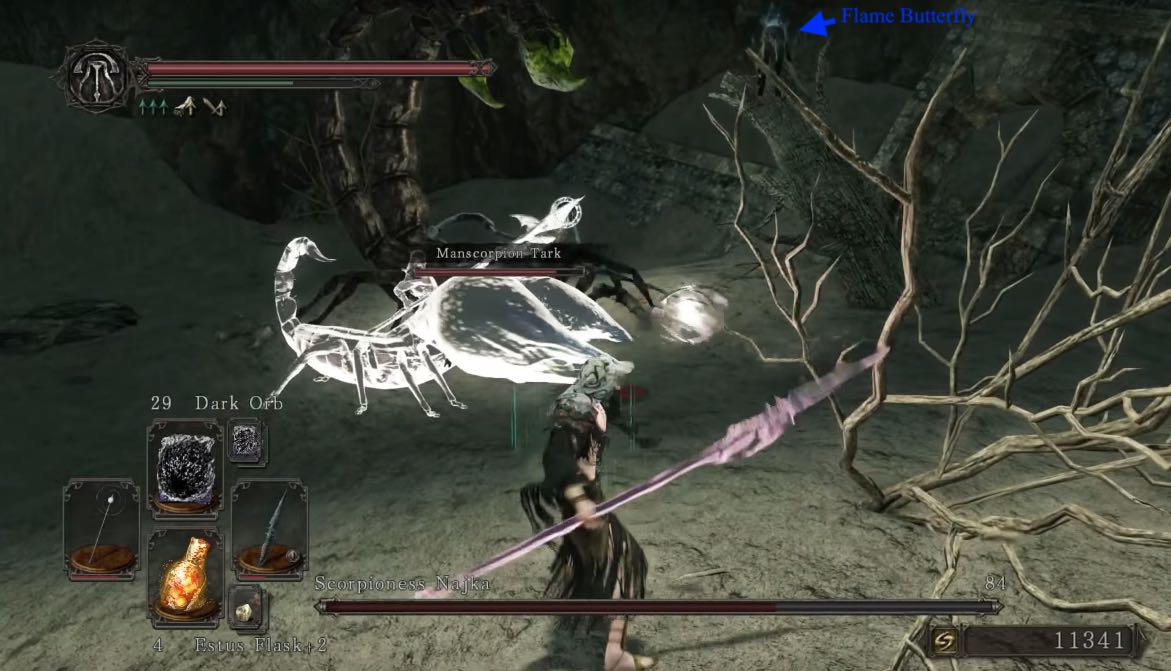 Note: In the boss arena is a tree trunk with a corpse on the top. You can't reach this unless you make her run into it and break it. The corpse only holds a few Flame Butterflies though, so don't get yourself killed over it.

After defeating the area boss immediately head back and speak to Manscorpion Tark with your Ring Of Whispers on if you want that Fragrant Branch of Yore, mentioned earlier. Return to the boss area and proceed through the doorway to the right to enter Doors Of Pharros.