Tseldora Settler is an enemy in Dark Souls 2. 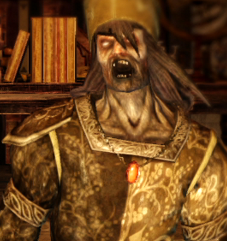 Propertier of Brightstone Cove and founder of the mining town which once flourished there. Duke Tseldora disappeared after the town was suddenly and mysteriously overrun by spiders and was never heard from again. Though the circumstances surrounding Brighstone Cove's desctruction remain unclear, the murky truth behind Duke Tseldora's disappearance seems somehow related to his unnatural obsession with spiders...