Bonfires in Dark Souls 2 are the checkpoint features in the game. Bonfires are special locations that take form as a bonfire which act like places of rest where players can replenish health and estus and serve as checkpoints on your journey. These also act as respawn points for players that have died. Players will spawn at the last Bonfire that they rest at. Bonfire need to be Kindled to be used, they will then also appear on your menu. Unkindled bonfires are unlocked and will be marked with a question mark until kindled. All Bonfire Locations, including those that were added after the DLC trilogy, have been listed below. Bonfires have since been updated in newer Souls game titles and have been renamed to Sites of Grace in FromSoftware's recent 2022 game, Elden Ring.

What are Bonfires in Dark Souls 2?

Bonfires are checkpoints that can be found throughout the different Locations of Dark Souls 2. Before they are kindled, they appear a sword in the ground with a small glow which will prompt you to light the Bonfire as you approach. They can be unlocked and then revisited at any point in order to rest, restore and strengthen any items that can be upgraded or attuned using one of the features of the Bonfire. Each Location should have a Bonfire within the vicinity, which may then be shown in your menu once unlocked or kindled.

What are Primal Bonfires in Dark Souls 2?

These are special Bonfires that can be accessed after defeating one of four Old Ones, the main Bosses, for their Great Souls. After each defeat, a Primal Bonfire will become available, but will not have the same features as a regular Bonfire. Instead, these Bonfires will prompt players to return to the The Far Fire Bonfire in Majula. 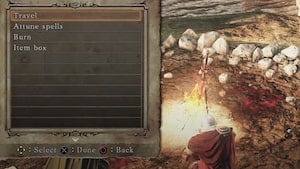 All Bonfire Locations in Dark Souls 2