Located in Lost Bastille, after the drop and fight with the first mummy, you must use an explosive barrel from atop the stairs to break the cracked wall and reveal the bonfire. There's also a door that can be opened with the Bastille Key.

The Undead Jailer who's waiting on top of the stairs, behind the explosive barrel, is meant to push the barrel down. Dodging it should make it roll against the cracked wall, causing an explosion and breaking the wall to make the bonfire available. However, if the barrel hits you or doesn't go straight forward, the cracked wall won't collapse. Most of the time the Undead Jailer doesn't even kick the barrel down the stairs.

Short guide on how to break the wall if the explosive barrel doesn't get kicked down:

First, you'll want to get rid of the Undead Jailer that's standing behind the explosive barrel (and some nearby dogs). You have to avoid fighting him near the barrel, because if he accidentally hits the barrel while trying to hit you, it will explode and you'll have to respawn it. If you're facing his back, you could lure him away by just poking him in the back and taking a few steps back. If you're facing him from the front side (with the barrel in front of him), you'll have to lure him away without hitting the barrel. A few ways of doing this are by using a bow and arrow, throwing knives or certain spells, such as Lightning Spear. Once you get rid of him, you'll have to kick the barrel down yourself by walking into it. Even if you do this yourself, it'll often still happen that the barrel will just roll down and lie there without exploding. If this is the case, then you will have to go down there yourself and try to place the barrel in front of the cracked wall (if it isn't already) by walking against it. Once it's placed in front of the wall, you'll have to cause the explosion yourself too. By simply hitting it with any small to medium sized weapon or a normal arrow or bolt, the barrel will break instead of explode, forcing you to go back and respawn it. Keep in mind that being close to the explosion will cause you to get hit by it and take a lot of damage (most likely more than half of your maximum HP).

Here are some known ways of making the barrel explode yourself:

(Note: The only way to make the explosive barrel respawn is by either dying or traveling at a bonfire. Resting won't make it respawn.)


How to get the bonfire: 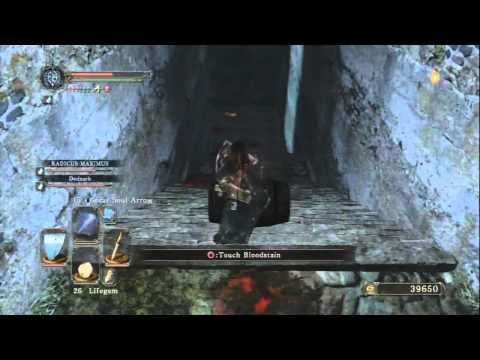