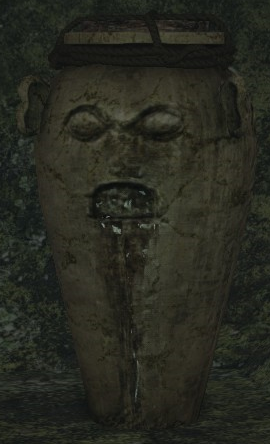 Cursed Vessels are traps that emit curse buildup. They closely resemble normal vessels that can be found through Drangleic. They can be distinguish by the ominous face design on them. Cursed Vessel will produce giggling and whimpering sounds if the player is close enough to hear. These sounds grow more intense as the player moves closer to a Cursed Vessel. If the player is in close proximity to them, then they will produce a thick black smoke and cause curse build up on the player. They can be destroyed by most attacks instantly and appear to have the same durability as typical vessels. They serve more as environmental hazards than enemies and are not capable of movement in any way. If the player stands near one of them long enough then they risk getting cursed, which will lower their maximum health similar as to becoming hollowed.

Similar to most environmental traps, invaders appear to be immune to the effects of the vessels although the black smoke effect that Cursed Vessels produce will still gather around the invader.

- Magic, most thrown attack items, and larger projectiles such as great arrows are capable to destroying Cursed Vessels.

- Cursed Vessels can be destroyed by most if not all melee weapon attacks, including shield bashes and fists. Rolling into them will also destroy them and is an easy way to quickly do so without sacrificing weapon durability or projectiles.

- Multiple Cursed Vessels within a close proximity will not increase the amount of Curse buildup that a player receives. Rather, it will increase the range at which the player will be affected by the curse build up.

- Destroying a Curse Vessel with immediately stop the progression of the curse build up but will not mitigate the current level of curse build up. The curse build up will slowly drain until stopping altogether. Therefore, engaging another Cursed Vessel while still under the effects of a previous one will cause the player's current curse build up level to begin increasing from the same point.

- The item Hollow Skin grants the wearer 1000 curse resistance which makes them completely immune to curse build up. Wearing this item will therefore completely mitigate the threat of Cursed Vessels as they will be incapable to causing any harm to the player.