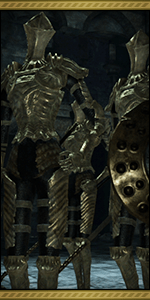 Very tall and lithe, the Ruin Sentinel is armored from head to toe in what looks to be bronze. It has a narrow helmet slit, giving it a something of a robot-like appearance. These enemies are extremely fast for their size, and come at the player with a variety of attacks, many notable for their wide hit potential. There are three named Ruin Sentinels, Alessia, Ricce, and Yahim, who make up the the boss fight in the Lost Bastille: three Sentinels fought in a room: one on the platform near the entrance, and two below on the ground. See the Ruin Sentinel page for boss fight details and other encounters.

Pilgrim Bellclaire can be summoned for this fight. Her summon sign is in the open cell along the right wall.
(SotFS) Felicia the Brave can be summoned as a shade for this fight. Her summon sign is next the operable gate leading to the cell corridor, on the side with the lever. Thus, one must either open the gate or take the long way around to get this summon.

The fight starts on a platform with one of the sentinels; the sentinel will immediately attack with an overhead attack, so rolling or running sideways (risky due to hitbox) is ideal to avoid the attack and punish the sentinel. Fighting him requires patience, and baiting his overhead smash is the safest method to dodge and punish--be wary of the camera and side way attacks. Then the second one will try to approach the platform; standing on the ledge will bait him into doing his jumping attack, and the player can back off to the wall behind to avoid it and punish it. It is highly suggested that players immediately capitalize on that and try to chip him before the other one attacks. After hitting the second sentinel twice, the player should jump off to avoid fighting them on the same ledge. The following part is the most challenging: fighting two at the same time. The key to fighting two opponents, generally, is staying in front of them and forcing them to not use dangerous long ranged attacks, and to make them attack and stay in recovery frames so that the player can punish them safely without getting hit, had the other one tried to attack the player while punishing the first opponents.

Keep in mind the Ruin Sentinels are extremely weak to both Blunt, and Magic damage. If you have any blunt weapon at your disposal (the Craftsman's Hammer from the chest under McDuff, for example), enchanting your weapon with Magic Weapon or simply using an Aromatic Ooze will give you a lot of extra damage so you can dispatch them with ease.

Easiest Way: Just prior to the grey mist, there is a spirit to summon in one of the cells containing a skeleton, which makes this fight significantly easier, as he casts Greater Soul Arrow repeatedly. After your destroy the first one, jump down and have one person tank the second one while 2 people attack the third one. If you can use lightning spells/weapons/weapon enhancements, use them because they are weak to lightning. Or simply kite the remaining two around while the spirit chips away at them, as with enough room and warning, avoiding the sentinels attacks is straightforward.

Bellclaire does all the work: Safe Requirements: Enough STR to two-hand a 100% physical block shield (8 for Drangleic Shield), summoning Pilgrim BellclaireEquip the Drangleic Sheild (or a 100% physical block shield, Drangleic is just the easiest to obtain along the way), and two-hand it. Enter the boss fog, block the first Sentinels attack, and then sit in a corner while blocking (lowering your block in between attacks, to regain stamina). Bellclaire will do her thing and blast the first Sentinel until it's dead.When the next two sentinels come down, jump down as well and simply do the same thing: get their attention, sit in the corner with your shield up, block the hits, and lower guard between attacks. You should be able to guard everything they throw at you. If they stamina break you, they both probably just attacked and will take a bit to prep themselves, giving you time to regen all your stamina. Bellclaire will get in range and start doing her thing, taking both sentinels down.This has worked flawlessly on many characters, usually involving taking 0 damage (except for fall damage). I have tested this with a Large Leather Shield (90% phys dmg, 40 stability), and lost about 800 health in total during the fight, so it can be done with a lighter shield. Just watch your health and heal when safe (after first sentinel/falling, and after a second sentinel dies).

If you acquired the Tower Greatshield from Cathedral of Blue a useful strategy for anyone with at least 15 STR is to 2-hand the shield and let the summonable NPC fight the Sentinels while you tank all of their hits. Since they only deal in physical attacks as long as you manage your stamina well you should be able to go the whole fight without taking damage as the shield has 100% physical block and high stability. If you lose aggro on any of the sentinels simply hit them with the shield until their focus turns to you.

If you acquired Dark Hail, Dark Sunset Staff +5 and having at least 50 Intelligence and faith or above (both), it is possible to stagger within 3 blasts provided if all orbs hit the sentinel since each sentinel is counted as large enemies rather than huge bosses, Stone Ring and Abyss Seal may also help. however, it may only work at early NG to NG+2 (tested in Drangleic Castle encounter)

See Drangleic Castle walkthrough for details on how to find this enemy. Once you enter the room with the Stone Soldiers, you must kill one next to each of the six doors in order to "soul-trigger" a door and gain access to each of the Sentinels. Once you trigger a door, it will automatically open, and the Sentinel will often aggro and attack. Each sentinel will stop respawning after being killed eleven times.