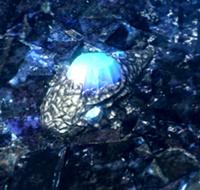 When a lizard is nearby, players can hear a distinct jingle sound that resembles shaking a bag full of gems or coins. When killed, lizards drop weapon upgrade items such as Titanite and stones for weapon reinforcement and infusion.

If approached, the lizard will scurry away and disappear after about 6 seconds if no damage is taken. If the lizard escapes, resting at a bonfire will respawn it. Lizards do not respawn if killed. If a player kills a lizard but dies without collecting the dropped items, they will disappear.

Once approached, the Crystal Lizard will skitter away, even off ledges. The lizards' small statures makes it difficult to hit them using weapons that don't strike downwards. Sniping them using magic or powerful bows that can one-shot them is usually the easiest way to kill them.
Note that the items they drop can fall off ledges and therefore be lost permanently. If it's scurrying against a ledge of some kind, just let it go and reset the encounter rather than risk losing the drops for good.