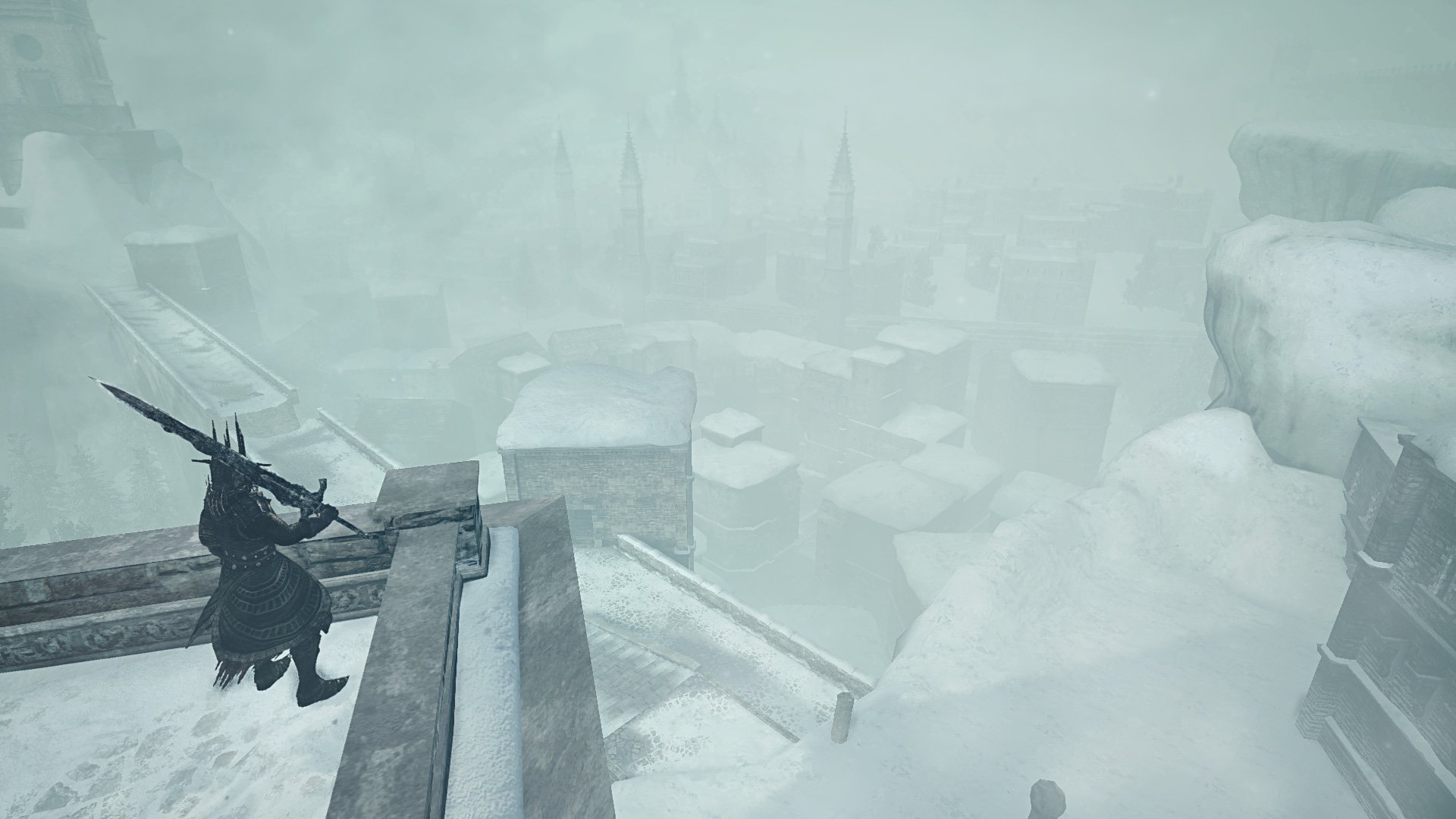 Frozen Eleum Loyce is a Location in Dark Souls 2. It is the main area of the Crown of the Ivory King DLC. It takes place in an ancient temple fraught with freezing storms, towering walls and a hollowing emptiness, where one is challenged by forces that are one with the freezing elements, made more difficult by the low visibility and enemies' esoteric abilities. 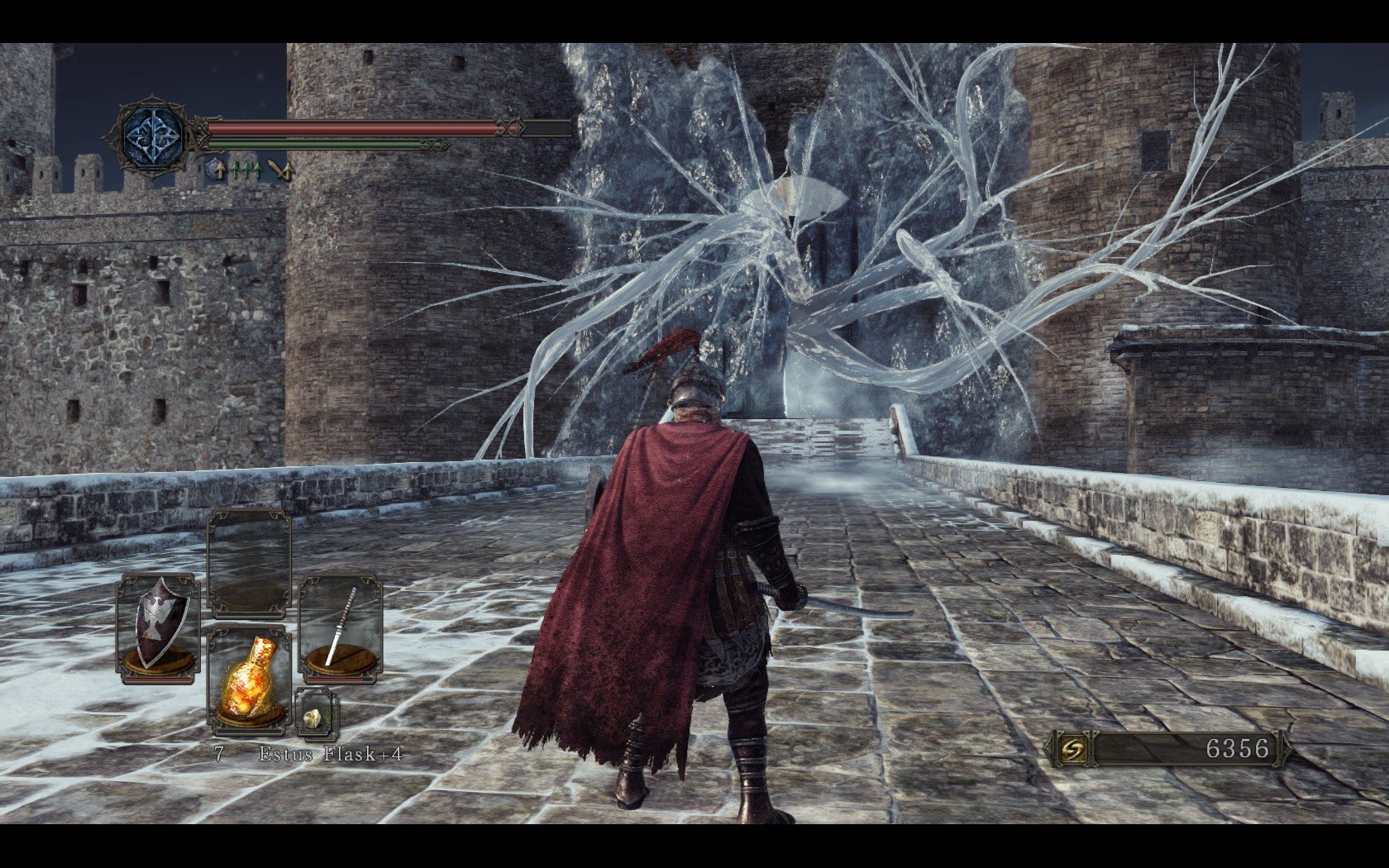 (needs improving)
After visiting the Cathedral, you need to return to the Frozen Eleum Loyce to find the Knights that will assist you before the final boss fight. Remember that when going through these areas that the ice have been melted a lot of places meaning that there will be a lot of loot available from unfrozen chests, the Retainer Rogues will get up and fight you and enemies killed near the Frozen Giants will wake them up and attack you(like the doors and giants in Drangleic Castle).

The entrance to this DLC is at the Shrine of Winter, which can be reached by taking the left path from the Ruined Fork Road bonfire in the Shaded Woods. When you interact with the shrine inside, you will be teleported to a snowy area. To your right is a set of stone slabs where players that don't have this DLC can place their summoning signs to be summoned to one of the DLC bosses.

In front of you is a big iron door that takes you to Frozen Eleum Loyce, which requires the Frozen Flower to open. Go up the stairs and light the first bonfire.

Head to the opening ahead, enter it then turn right. Down the stairs there will be a Rampart Soldier waiting, kill him and head through the doorway to find another one. On the left there is a body holding 4x Radiant Lifegem.

A third soldier will be attracted by the fighting noises and will come up the stairs to attack you, kill him and go down the stairs on the left. Another soldier will try to ambush you from the left, after killing him take the left exit (the other one is blocked for now).

Cross the path and kill the next soldier. Pick up 2x Goldenfruit Balm from the body and head outside. A soldier will come from the left to attack you, kill him and continue down the stairs.

At the bottom of the stairs,on the right, there is a yard with 3 Rampart Dogs and a body holding a Winged Spear +7. Continue down the main path and when you reach snow covered floor, turn left and pick up 5x Torch from the body near the edge.

Take the right path now, you will see ice boulders blocking the path to some bodies holding items, leave them for now as you can only reach those and many other items/chests later in this DLC. Continue ahead and you will see a frozen fountain on the left and a group of enemies.

After killing them there will be 2 more ahead waiting for you. Turn left and pick up 5x Small Blue Burr from the body. Back to the main path, go up the stairs on the left and kill the 2 soldiers there.

Enter the building on the left and kill the weak enemy there. Break the crates and go down the icy path. Enter the cave on the right and kill the Rampart Lancer. Further ahead another Lancer will emerge from the snow. Pick up the Old Bell Helm from the body.

Go back and now enter the building on the right. Drop down to the lower level and light the bonfire.

There are two Golems in the yard outside. Up the ramp, kill the Golem and the Rampart Soldier by the stairs. A body next to a building contains 3x Lloyd's Talismans. Between the two buildings there is a path that leads to the snow bank above the fountain courtyard you came through before. If you follow it to the left, you can pick up a Ring of the Embedded. The right side will take you back above where you just came from, and this bank contains a corpse with the hex Dark Dance.
Drop down from the corpse with the hex and go up the stairs where you killed the soldier before. Keep following the stairs, ignoring the locked door on your right once you get to a tunnel, and you will see a Rampart Lancer guarding a big metal door. Kill it and pull the lever to open the door. A body nearby has 5x Radiant Lifegem.

Go through the door and turn right, going up the spiral stairs and giving the left path a wide berth. There will be a door leading to a room with a Soldier and several chests that are frozen, for now. Keep going up the stairs and kill the lancer on the landing. Follow the path through a tunnel on the left. You will find yourself on a huge walkway. Take the left path inside a building with several exits. Take another left. A soldier will attack you from the left, defeat him and enter his alcove to pull a lever that clears the path littered with boxes from when you first entered Eleum Loyce.

After opening the shortcut, head back outside. A Lancer will be waiting on your left, along with a corpse with 8x Green Blossom.
Down the stairs another soldier waits for you, kill it and enter the doorway behind it. Drop down and pick up a Crimson Water, and keep going down the stairs.

You will see a lit structure ahead and Elana will speak to you again as you approach it. Go up the stairs to get inside and pick up the Eye of the Priestess from the skeleton at the altar. This item will allow you to see the invisible enemies and bosses that exist in this DLC.

Outside this building turn right and go down the path leading left. Kill the warpick-wielding knight and the path ahead will be very straightforward. Along the way there are 2 bodies holding items, they are 5x Alluring Skull and a Skeptic's Spice.

Further ahead there is a fog door on the left, enter it and light the bonfire ahead.

Head right from the bonfire and pull the lever to open the door. The next room has 2 Rogue Sorcerers and two soldiers. Kill them and turn right after exiting the room. Go up the stairs, kill another soldier, and pick up 2x Dried Root.

You will be invaded by an NPC called Holy Knight Aurheim. However, he's hiding and wants you to find him first, so for now, go up the next set of stairs and kill the sorcerer and two soldiers up there. The three Frozen Golems in this room are surrounding a chest that contains the Curved Nil Greatsword. Enter the left doorway and go up more stairs.

You will see many barrels in this corridor, and one of them near the end is the invader in disguise. Open the chest at the end and pick up 10x Silver Talisman.

Enter the doorway on the right and go up the stairs. At the top drop down to the lower path and you will be in the first area of Frozen Eleum Loyce again. Turn left and enter the mist to fight the boss, Aava, the King's Pet.

After killing the boss, go through the doorway and up the stairs to enter the Grand Cathedral.

After visiting the Cathedral, you need to return to the Frozen Eleum Loyce to find the Knights that will assist you before the final boss fight. Remember that when going through these areas that the ice have been melted a lot of places meaning that there will be a lot of loot available from unfrozen chests, the Retainer Rogues will get up and fight you and enemies killed near the Frozen Giants will wake them up and attack you(like the doors and giants in Drangleic Castle).