NPCs in the Shulva - Sanctum City

From the second bonfire in the Black Gulch, break the pots and drop down to the bigger area. Immediately head right and once you pass the path filled with poison statues, head across the area to find a small entrance into a cave. This will bring you to the Primal Bonfire and the Obelisk that can be activated with the Dragon Talon to enter the Crown of the Sunken King DLC. 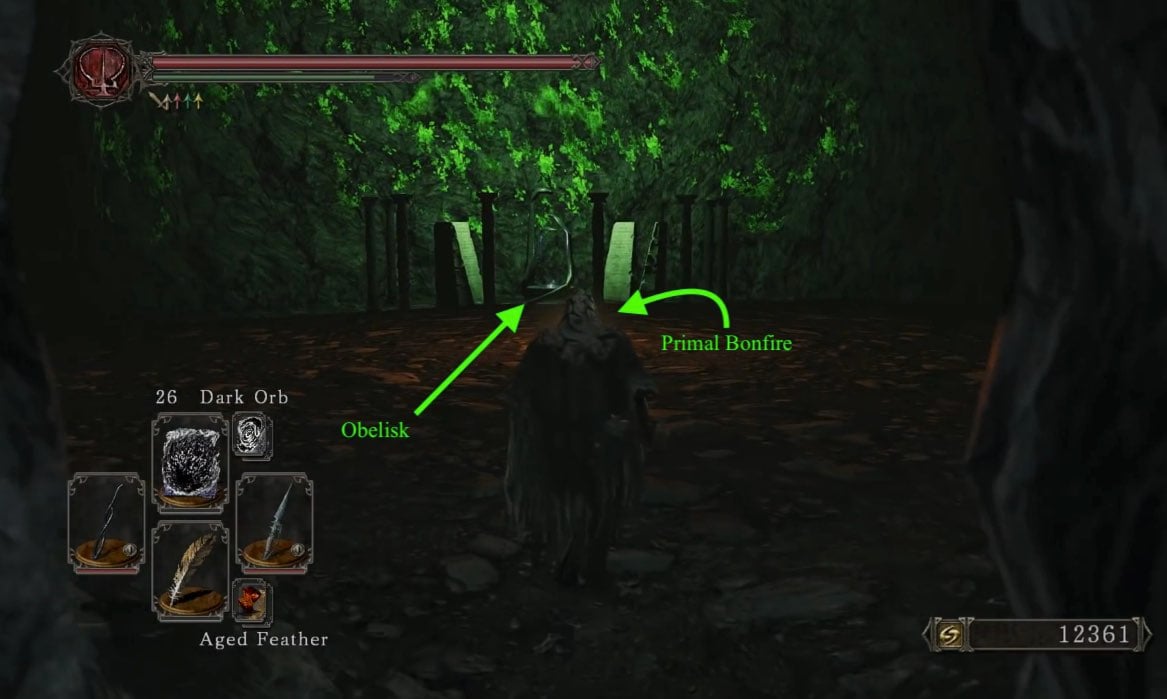 Continue past the statues and fire to open a pair of big doors, this will lead you to a straight passage that ends at a cave exit, and brings you to Shulva, Sancum City. As you pass the doorway look left to find a body with 3x Dragon Charm. Continue down this path and you'll awaken a sleeping dragon that'll fly away, so keep moving forward until you reach a bonfire, the Sanctum Walk bonfire.

To the left of the bonfire there are stairs leading down, at the end of the stairs is a body that holds 3x Old Growth Balm. Behind the stairs is an entrance to a shortcut that will be unlocked later in the level, so head back to the bonfire and this time follow the main path. Shortly after, you'll encounter a Sanctum Soldier playing dead that will attack you as you approach him.

Further ahead you will see a small obelisk and a group of enemies down the path. Hitting these obelisks will either raise or lower structures that can give you access to areas or help with eliminating enemies. In this case, it hits 3 of the Sanctum Soldiers, heavily damaging or even killing them. On the left, you'll find three Sanctum Archers and a body holding 5x Lifegem, and an obelisk to the right of them. Once again hit it to raise the structure directly in front of them and jump on it. This will give you the height advantage but will also damage some of them, and grant you access to the Dark Quartz Ring+3 from the body on the pillar to the right. Jump down and hit the first obelisk again then drop into the gazebo-esque structure as it descends. At the bottom, head out and walk the ledges until you reach a small jump to another platform holding a Long Bow+7. Here, a Sanctum Soldier may drop down. From here, look up for an obelisk and once you've identified it, use the longbow you just found to shoot it, activating the structure you currently stand on to raise. 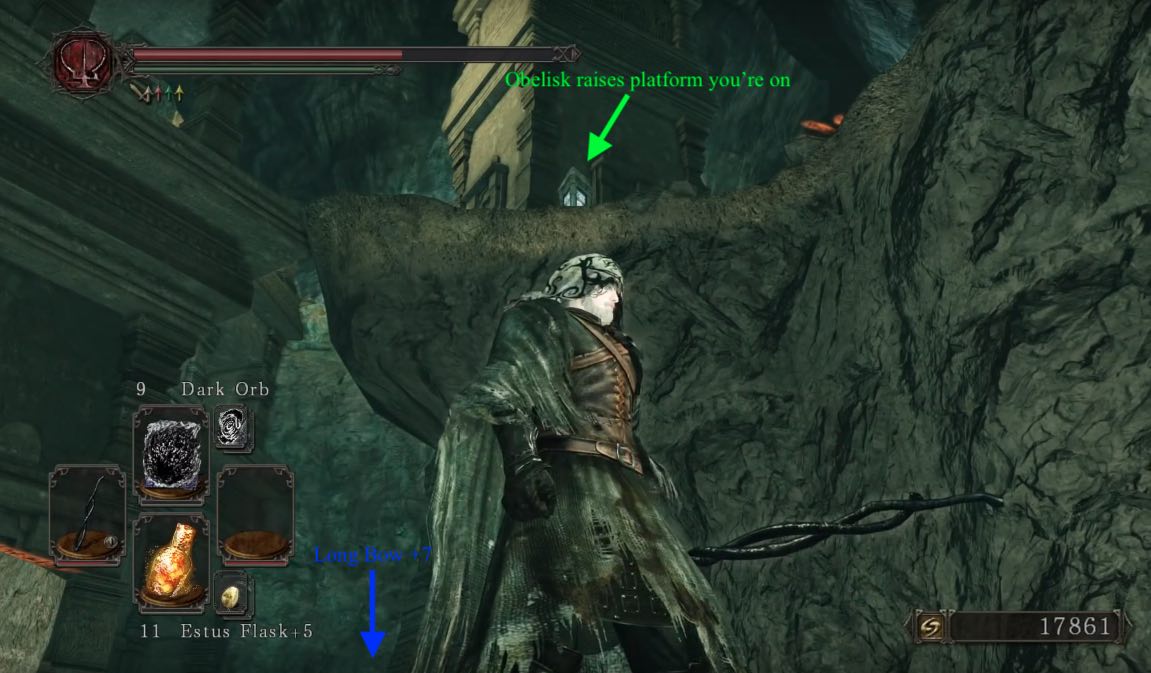 On one side you'll find a single Soldier standing next to a corpse draped over the edge, holding a Poison Stone. Continue forward from here to find another obelisk and a set of stairs. Head up the stairs and you'll find two doors on either side, and a Sanctum Archer on a platform behind. 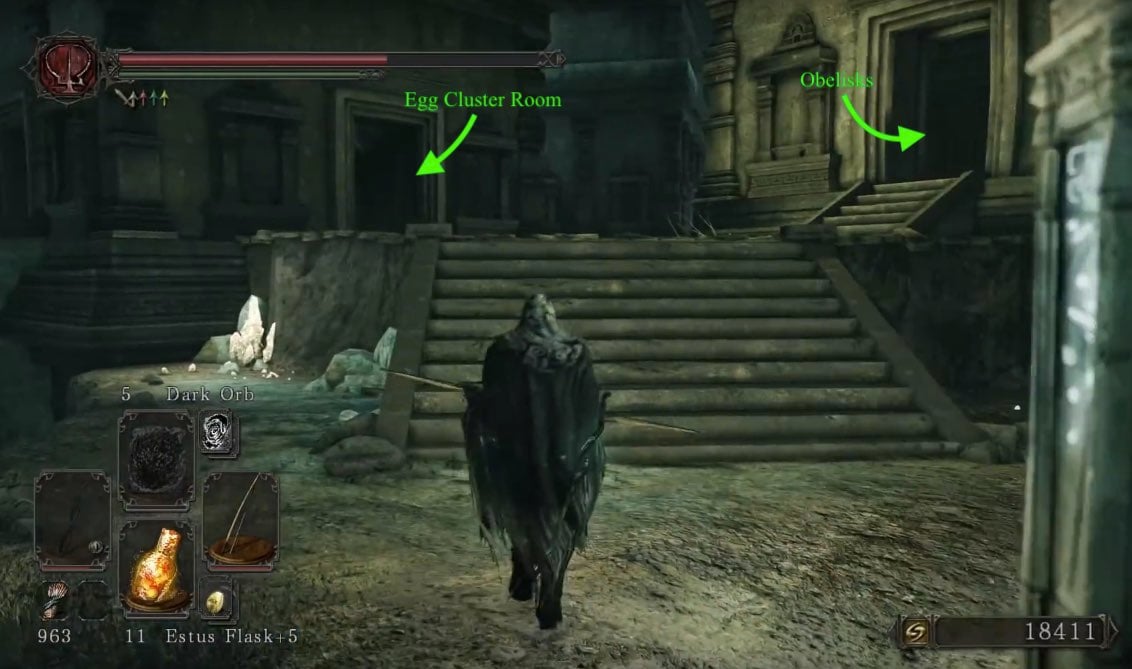 Look for the cluster of urns then destroy them to open up a new path for you to traverse. Past them, you'll find a doorway just beneath the platform you're currently on. Continue through it and up the stairs, passing the egg clusters, to find yourself in a room with 4 Corrosive Egg Crawlers. You'll find two doorways up here, one leading back to the platform you just came from, and another to a ledge holding an Elizabeth Mushroom and a decent spot to snipe the upcoming enemies, or hitting the obelisks to raise the structures and provide you with cover from the Archers ahead for when you pass by, with your newly acquired Long Bow +7. Once you're done here, head out the door that brings you back to where you came from and look for the stairs on the right.

Head down the stairs but not before taking out the Poison Statue Cluster out from range. It guards 20x Throwing Knife and 5x Cracked Red Eye Orb. On the left after the statue there is a Sanctum Soldier in a dead end. Proceed down the same way, ignoring the path down the slope on the left for now, and heading just next to it to pick up 30x Magic Bolt behind some debris. Continue forward and you'll find the first obelisk. Depending whether you shot it or not earlier, it will either be raised or not. Either way, use it so you can take it up to the only bonfire of the area, the Tower of Prayer.

Shoot the obelisk and take the platform down. There will be a Sanctum Soldier on the floor that will rise when you get near and behind him an Archer. Above the Archer there will be another Soldier with another 2 Archers. After dealing with them loot the bodies in the area for 3x Twinkling Titanite and 3x Lloyd's Talisman. Up the stairs there is a Sanctum Soldier and a corpse with a Dried Root. Further along the prior path there is a small building with a Poison Statue Cluster and a ladder inside; had you hit all the obelisks to raise them all in a line from the bonfire, this is where it would've taken you. Go around the building and hit the obelisk.

Go back to the front of the building and you will see a cave, look a bit down to the left and you will see a set of red-eyed statues and an obelisk behind them. Use either great arrows or a spell to break the statues and hit the obelisk. If you don't have any of these, then look down and you will a structure. Drop down to it and from there shoot regular arrows at the obelisk, the angle from down there will allow to hit the obelisk without breaking the statues. In the middle level of the structure (you will be one level above if you jumped down to hit the obelisk, so just fall to the entrance of the cave and walk back) there is a body holding 5x Torch. Entering the cave will have you pass 3 Poison Statue Clusters. Inside you'll find a weird tree and 2 bodies, they hold a Notched Whip +7 and Hex, the Promised Walk of Peace. You can kill the tree by hitting its eyes to make it drop 3x Dried Root, but it you hit it with any whip it'll completely restore the durability of all of your items currently equipped. Oddly, if you hit the the tree with the curved sword Eleum Loyce, it'll also steal the health from the tree. 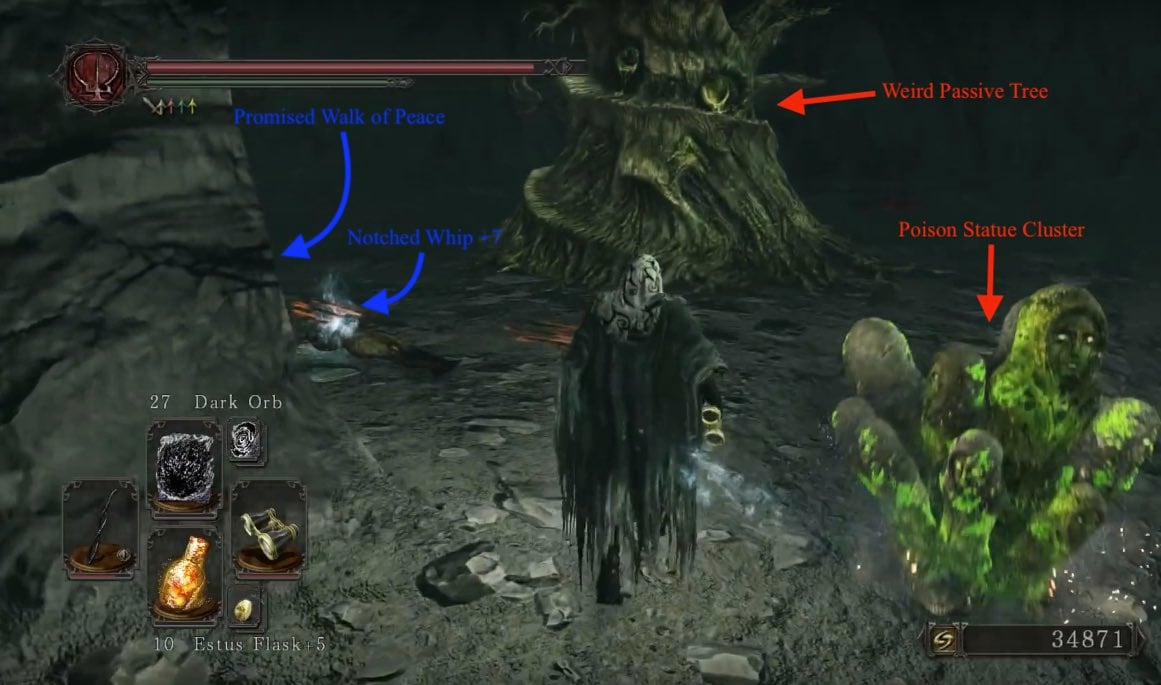 Path to the Dragon's Sanctum

Head back to the first obelisk (bonfire). Make sure the first platform is down. Walk onto it and jump to the platform on the left and pick up 2x Darknight Stone. Now hit the obelisk with an arrow and as the platform rises, run onto its middle level to pick up a Thunder Quartz Ring +3. From here shoot an arrow to the obelisk that controls the third platform to lower it. Jump on it, then hit the same obelisk again to return to the Tower of Prayer bonfire.

Exit through the other door and drop down on the left side. Pick up 1x Dried Root from the body then enter the building and kill the Sanctum Soldier. Exit to the ledge and walk all the way to the right to find a body that holds a Sanctum Mace. Go back to the building and to the ledge you dropped on, now drop down to the right side. Down the path and there will be a Soldier on the left, kill him and cross the bridge on the right. In the building ahead, you'll find 10x Rusted Coin on a body, and the shortcut mentioned earlier, to bring you back to the beginning of the level. Head out, and proceed to the bridge with the 2 Soldiers.

The first time you go to this area Sinh, the Slumbering Dragon will show up and shoot 3 fireballs towards the bridge, killing any enemies on it. Don't step on the bridge yet, break the vases on the other side and go around to find the sorcery Focus Souls on a body. Go back to the bridge and kill the 2 Soldiers, in case they survived the roast. Enter the building and you will arrive at the Dragon's Sanctum. 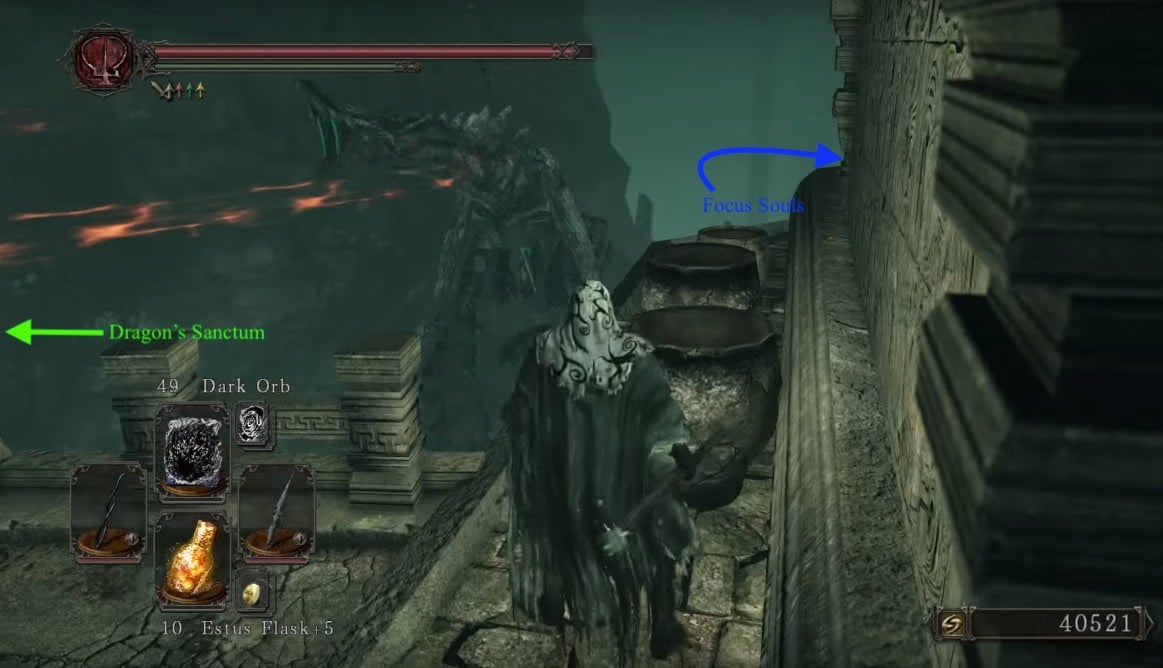