After arriving from the Dragon Aerie through the bridge, there is a bonfire in a small building left of the stairs. Head up the stairs and you will face a Drakekeeper. Behind him, in the arches under the upcoming stairs, are a pile of boxes hiding a Pharros' Contraption which reveals an illusory wall on the left. Inside is a metal chest with the Judgement Set and the Staff of Wisdom. Take a right just before the stairs and go through the doorway to find a metal chest with 3x Bonfire Ascetic. 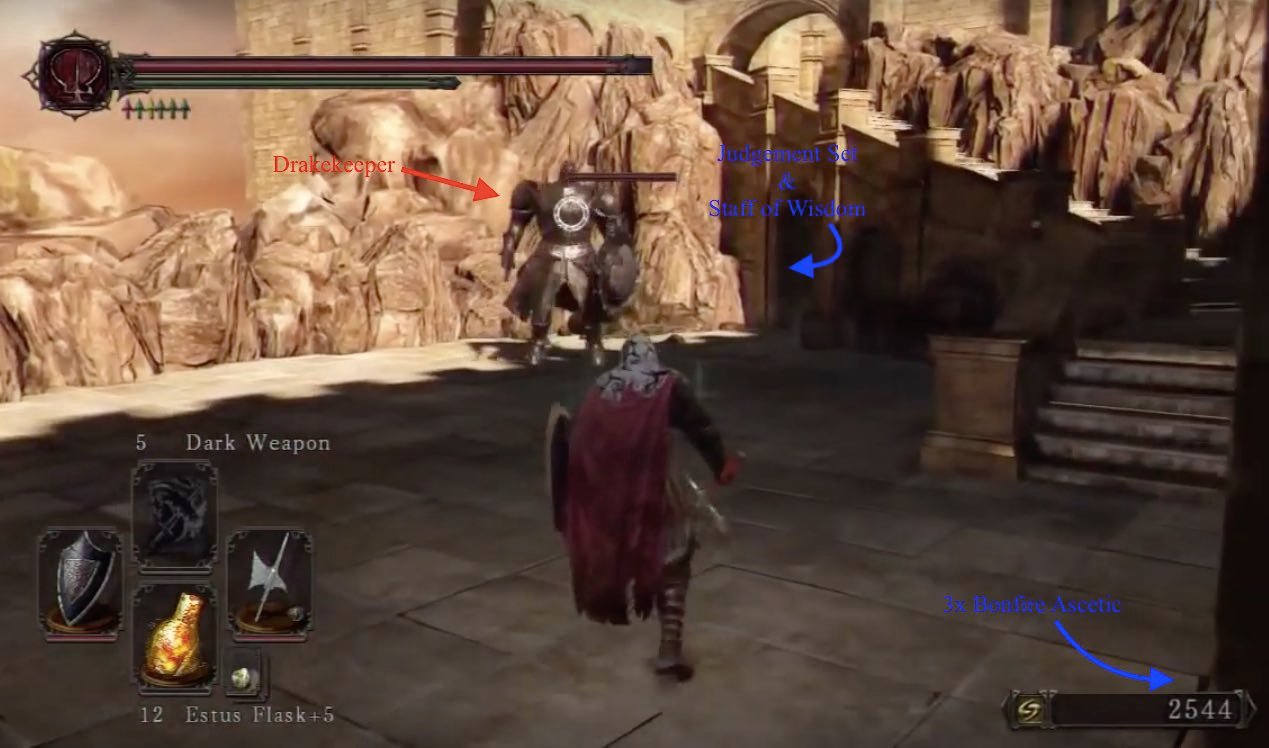 Having looted it, continue up the aforementioned stairs and you will find a Drakekeeper ready to attack. This one also wields a two-handed which makes this fight trickier than the sword-wielding one earlier. This enemy has a relentless flurry and is only open to larger attacks after he swings his mace overhead and smashes it into the ground.

Continuing through the arches on the left, and up the first flight of stairs will be a chest containing a Twinkling Titanite. There will be another set of stairs to climb into a gazebo-esque structure holding a Dark Priestess and a Faintstone. Jump across through the opening in the railing to the next platform to find a metal chest on the right, with a Drakekeeper's Greataxe and Drakekeeper's Greatshield. 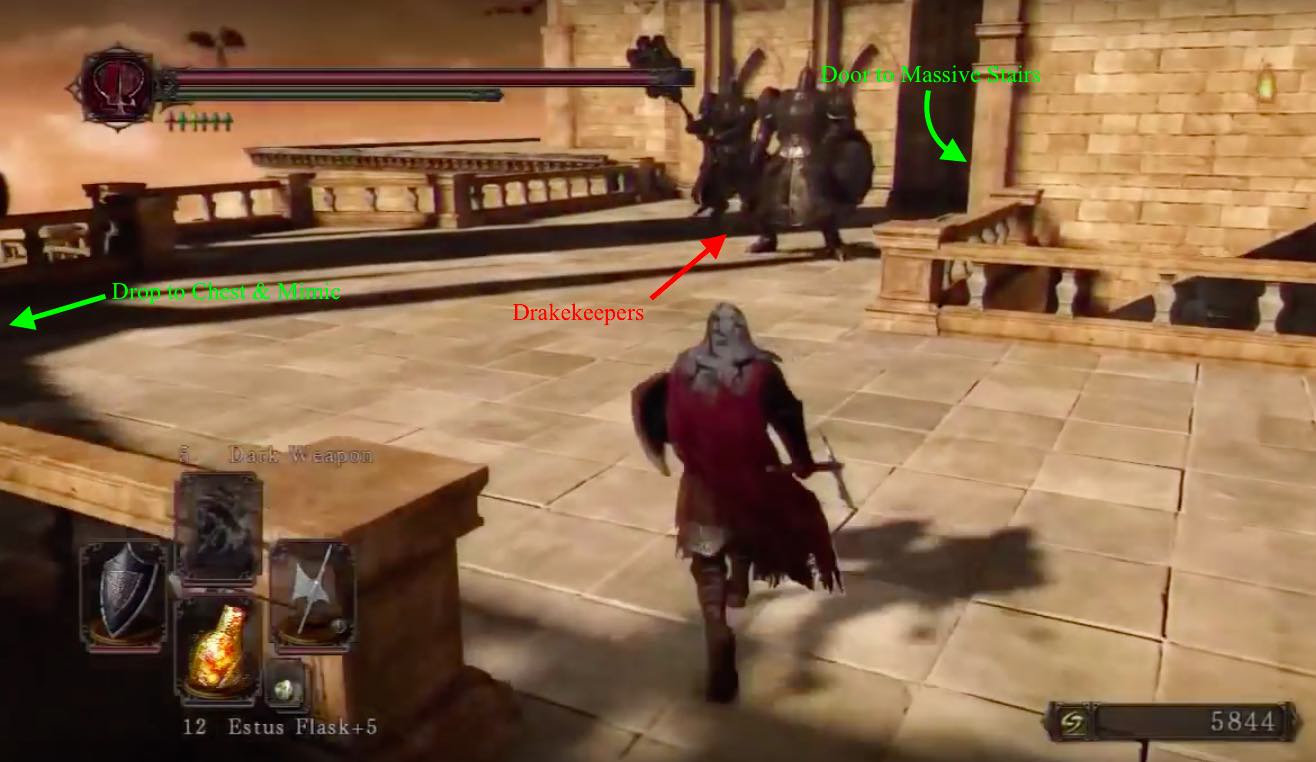 Drop down to the stairs below and head up to find another two Drakekeepers. After they have been dealt, head left of the stairs to drop down into a lower level and find a chest containing a Titanite Slab, and a Mimic on the right that drops the Washing Pole and a Petrified Dragon Bone when killed. 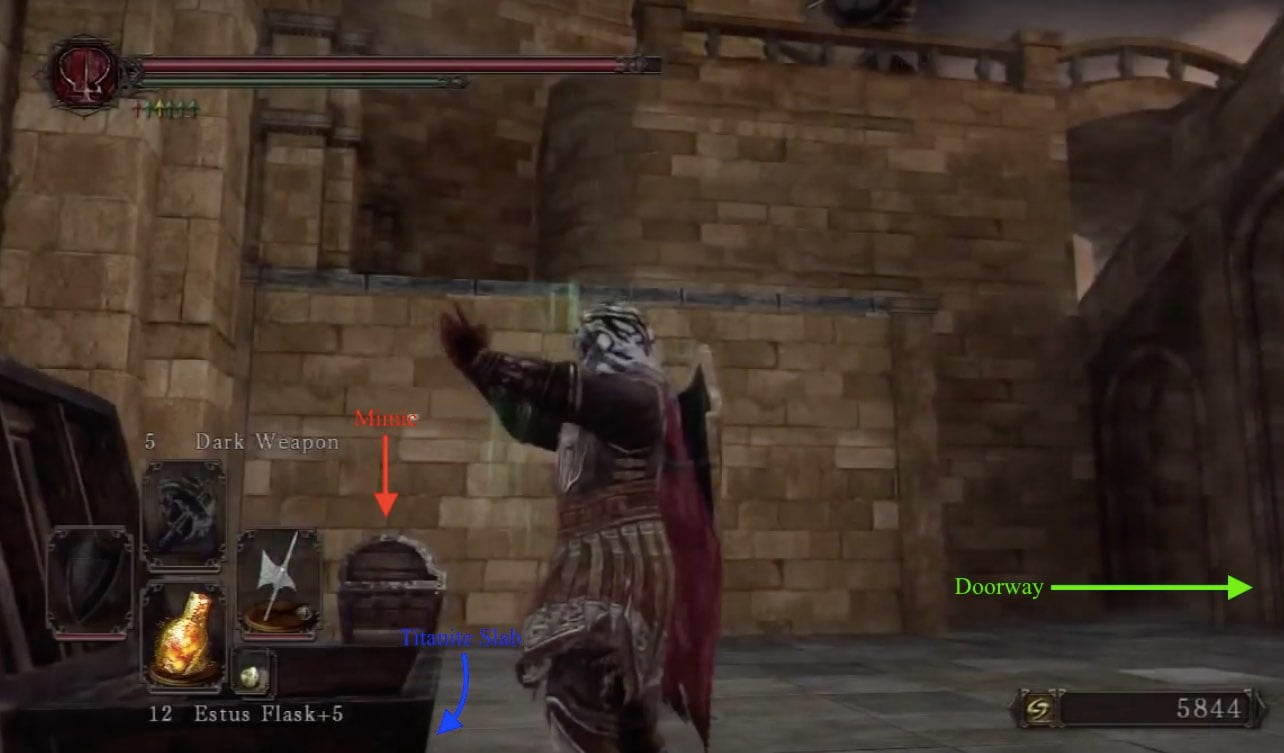 Proceed through the doorway to find Drakeeper -wielding a Great hammer and Greatshield, with a corpse holding Skeptic's Spice and Twilight Herb, in a small recess on the left of the room. 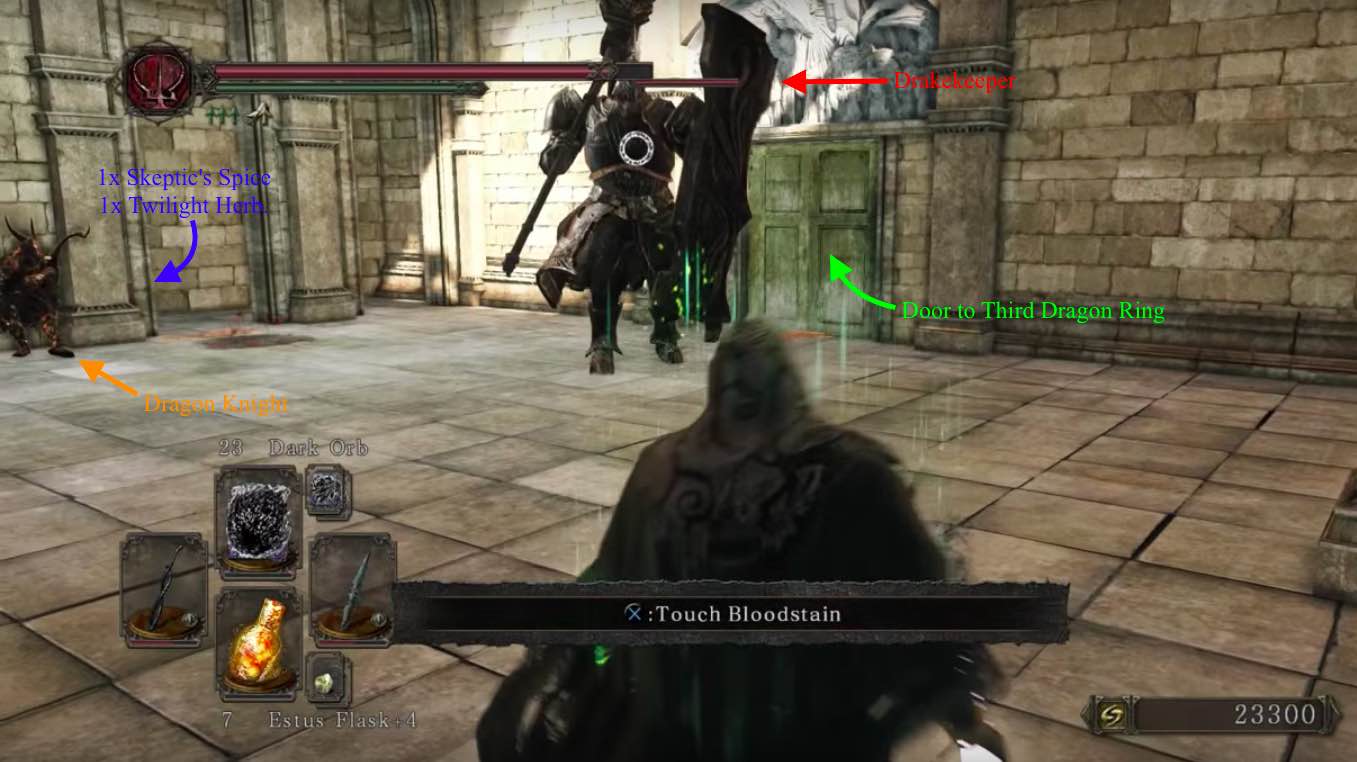 Going through the door, inside is a metal chest containing Third Dragon Ring, that triggers the invasion of Dragonfang Villard upon opening, and a long staircase up. While the invasion is in motion, he actually spawns upstairs at the shrine and will wait for you there. Once defeated, feel free to take the Petrified Egg  from the shrine here; this item is use to join the Dragon Remnants later, after you give it to Magerold of Lanafir at Iron Keep. 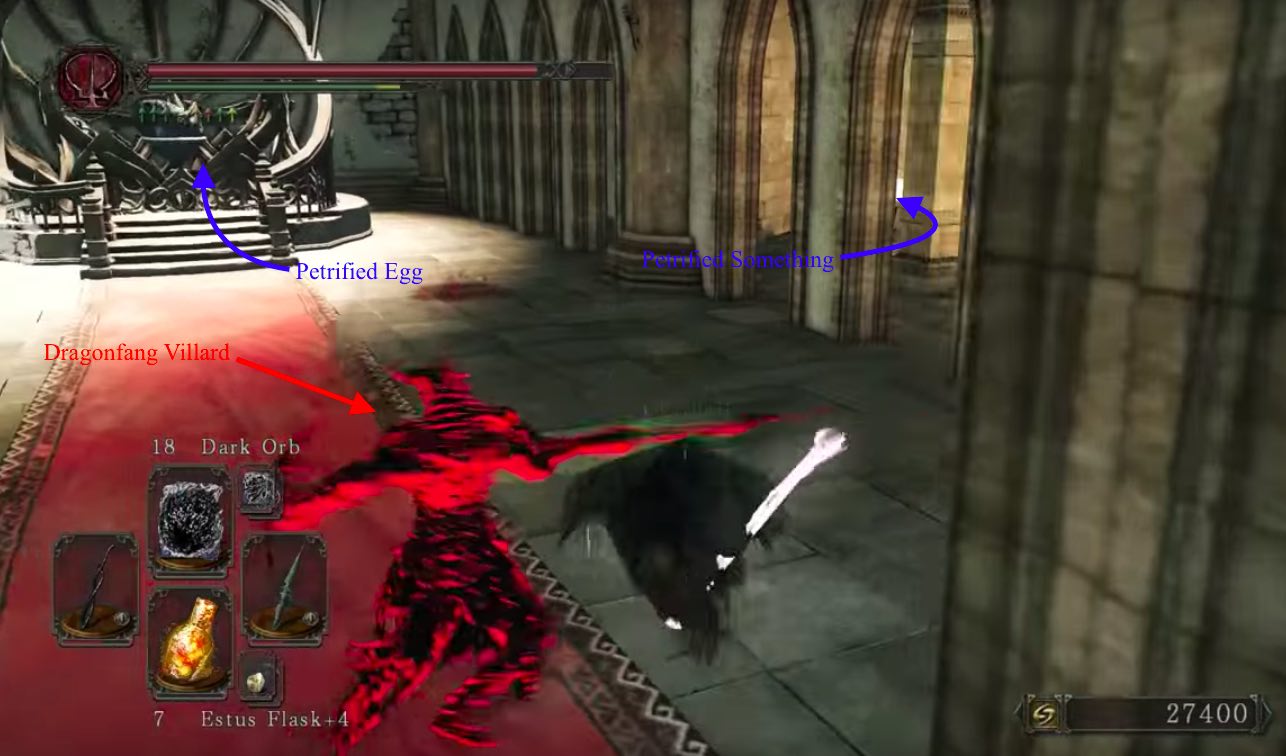 Route to the Ancient Dragon

Opening the wooden door and another wooden door will lead to a massive staircase leading up. Heading up will bring you initially to a pair of Drakekeepers. Beyond them, but already within your line of sight, are two Dragon Knights. These enemies are very fast and extremely though, and are very hard to deal with in pairs -try to lure one at a time, and avoid fighting the Drakekeepers any higher on the stairs. 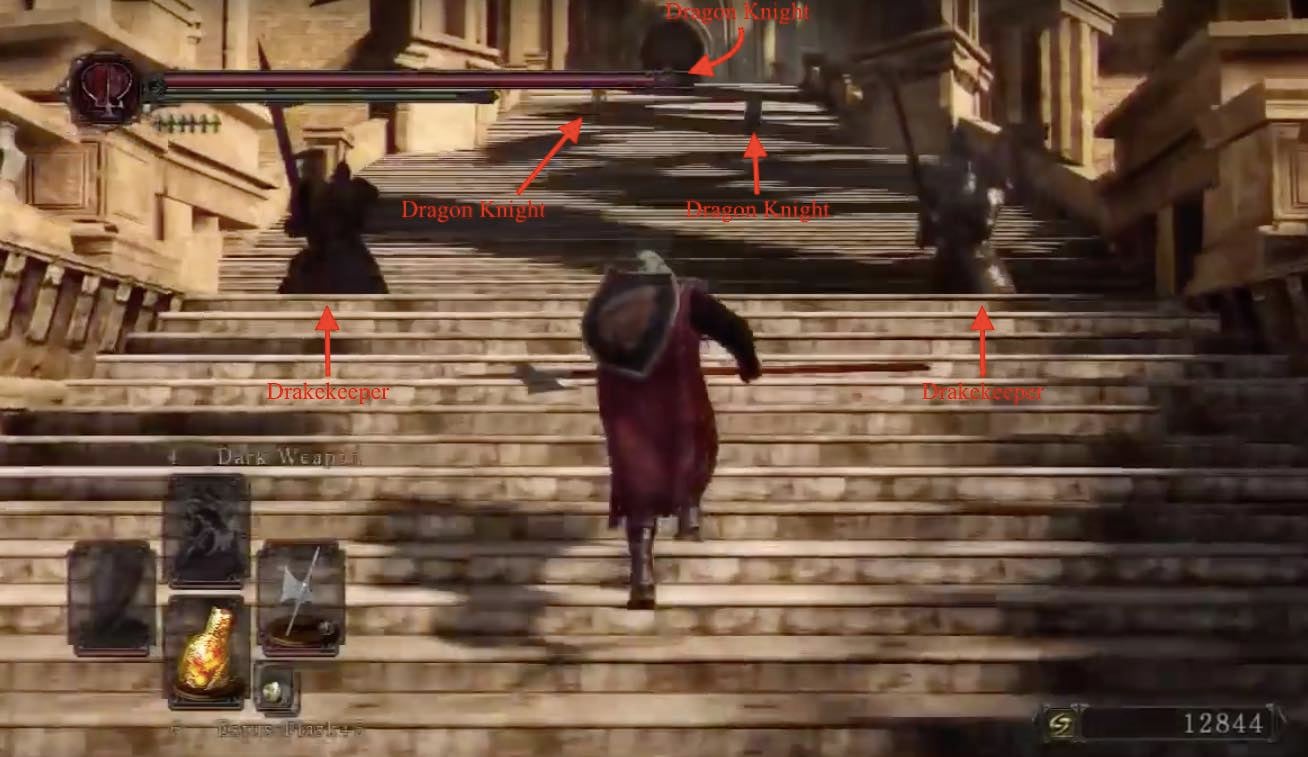 That being said, once you defeat all four, it's not over. You have one more Dragon Knight to deal with before you can cross this corridor to come out onto a large open platform with the Ancient Dragon waiting for you. Talking to the ancient one will award you with the Ashen Mist Heart. Remember all of the strange tree-giant hybrids that are laying around in various places? Now you can finally interact with them.

You can also choose to fight him or not, but there's no real need to. 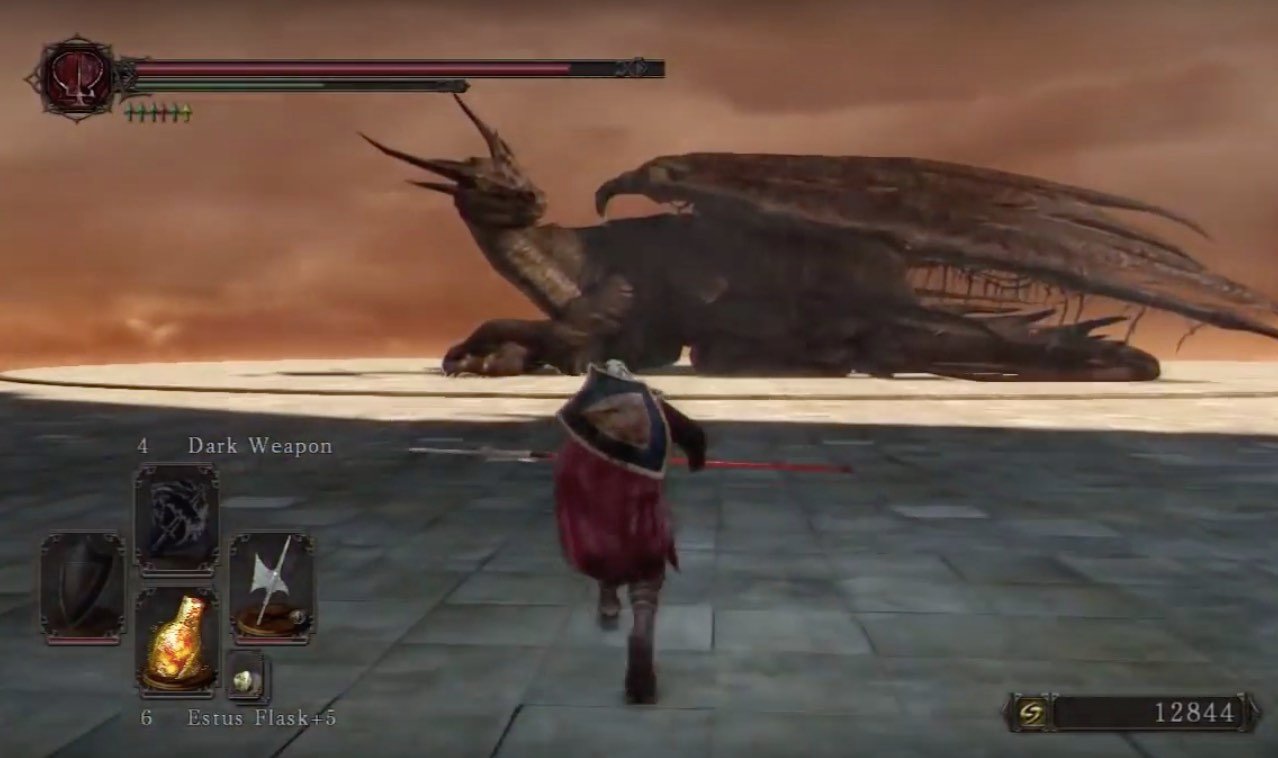