NPCs in the Harvest Gulch

From the Skeleton Lords boss area in Huntsman's Copse, head through the doorway in that room and continue on a path leading to a raised bridge. Pull the lever on the right to lower the bridge and cross over into Harvest Valley. As you move along the rocky pathways you will soon encounter a pool of poison to your right blocking a cave which harbors the first Bonfire. Defeating the boss in Earthen Peak will drain the pool is drained. However, as that comes later, cross quickly but don't roll as that covers your entire body in poison rather than only your legs. Once you've used the bonfire, head back across the poison pool, and up the right side the hill to encounter the NPC Stone Trader Chloanne . Exhaust her dialogue to move her to Majula. 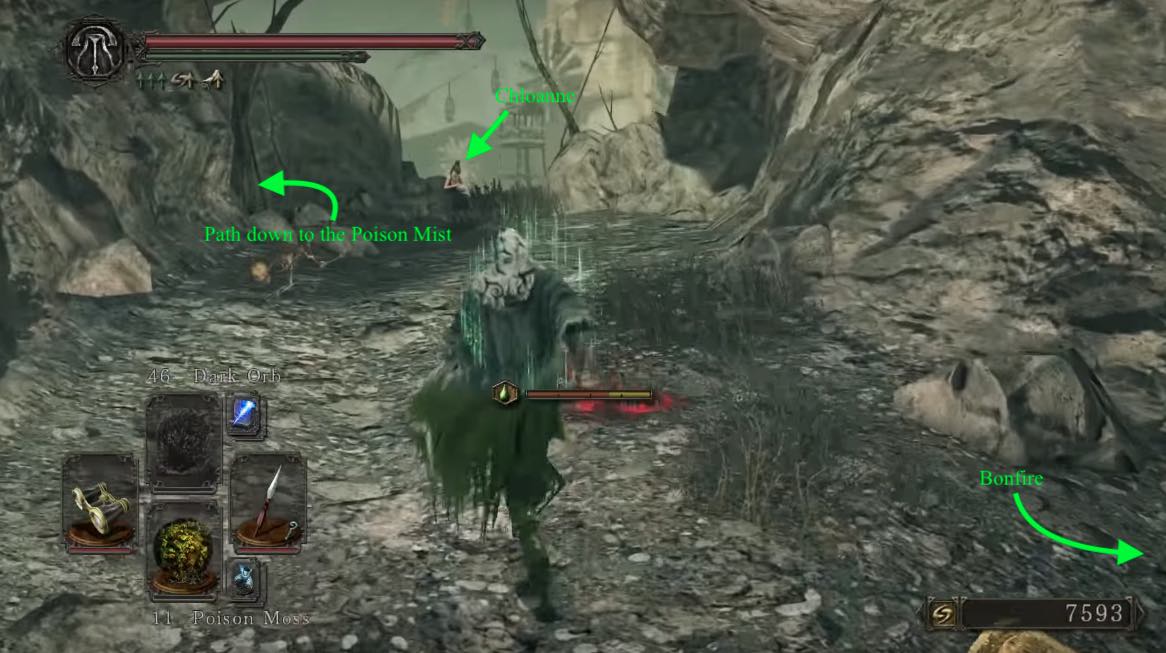 Peering over the edge, you can spot a rather large enemy standing in the middle of a poison lake, a Banedigger; this guy uses Dark Orbs. Use this vantage point to defeat him with ranged attacks, as battling in the poison mist is too unnecessarily risky. After dispatching him, head down the path to your left and continue to walk along the ledge to find a spawning Skeleton and a corpse holding a Lifegem. In the poison mist you can see a plethora of items scattered all over the area. There are also 3 Hollow Crawler and a few more Skeletons that spawn when traversing this area. Tank up on anti-poison items of your choice and plunder: 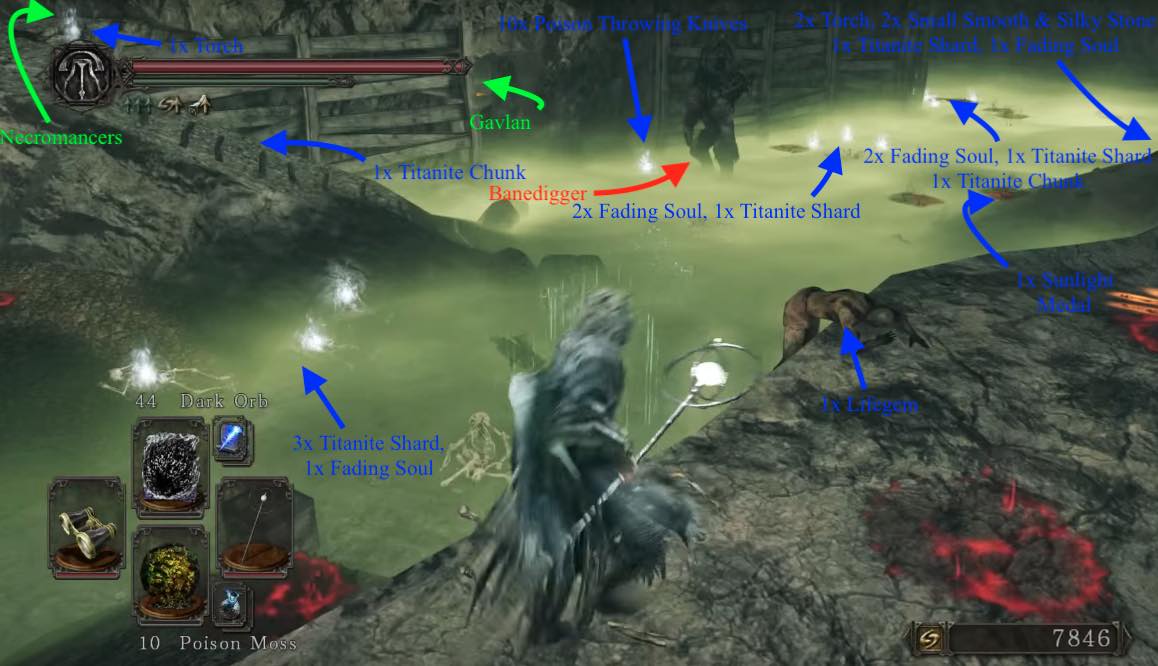 Head through the small archway in the middle of the lakes wall and kill the skeleton to your right. Circle around the left of the poison pit to loot a corpse holding a Fragrant Branch Of Yore and a Torch. Continue along the ledge and enter the hole in the wall to find the NPC Gavlan (If you talked to him previously in No Man's Warf ). Behind him is a chest containing Raw Stone. Exiting this room, in this same cave, down in the mist, there should be a small alcove to the left of the slope leading down. In here you'll find a chest containing a Fire Seed and a Divine Blessing. 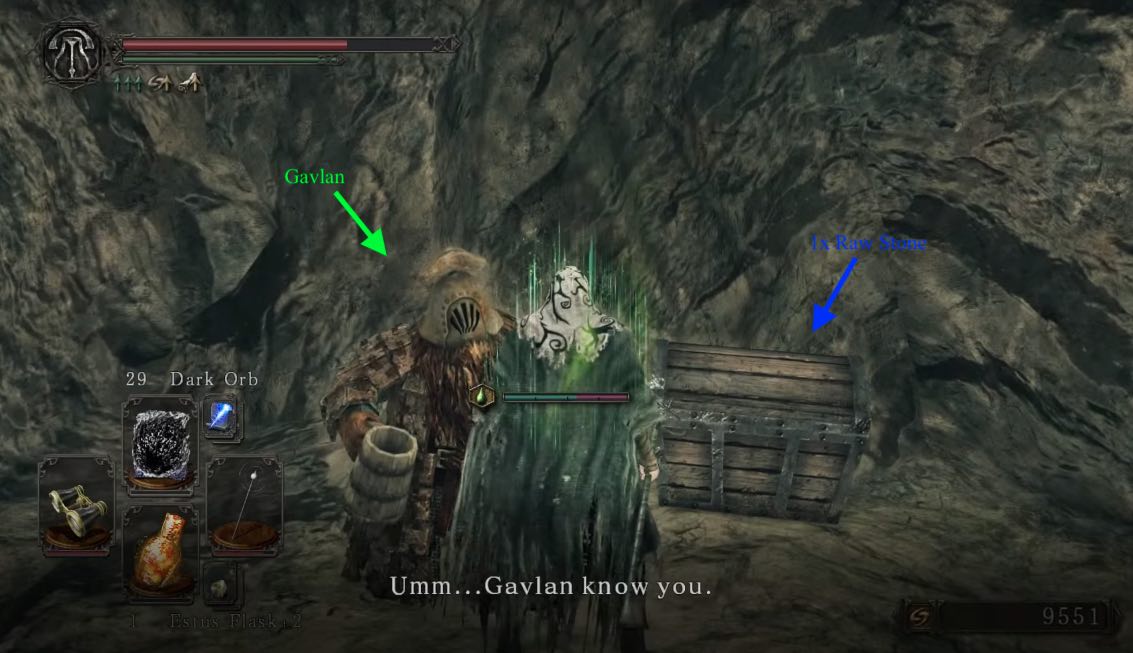 Leave this cave, back out to the open and head up the slope to where you found the single Torch. Continue along and you'll arrive to the greetings of two Desert Sorceress; one on a ledge on the left, and another on a higher platform at the back. Climb the ladder that you first come across on the right for a better vantage point and 10x Hexing Urns. You will also find multiple Undead around the area. Climb the second ladder on the right to arrive at where the second Desert Sorceress is/was. You'll find a lever you can pull to raise the wooden gate blocking the exit. Head through and turn right to reach the second Bonfire. Be carefull with the urn in this area, as they are all filled with poison.

From the Second Bonfire

Past this bonfire, you'll come upon a small quarry with several holes filled with poisonous gas. Here you'll find three Crystal Lizards. This is quite convenient, as if you miss any of them, you can easily go back to the bonfire, rest, and try again, without traveling a long distance or having to face any enemies in the process. Along the left wall is a path leading up to a boarded off area, and an opening on the right, ignore the opening for now. 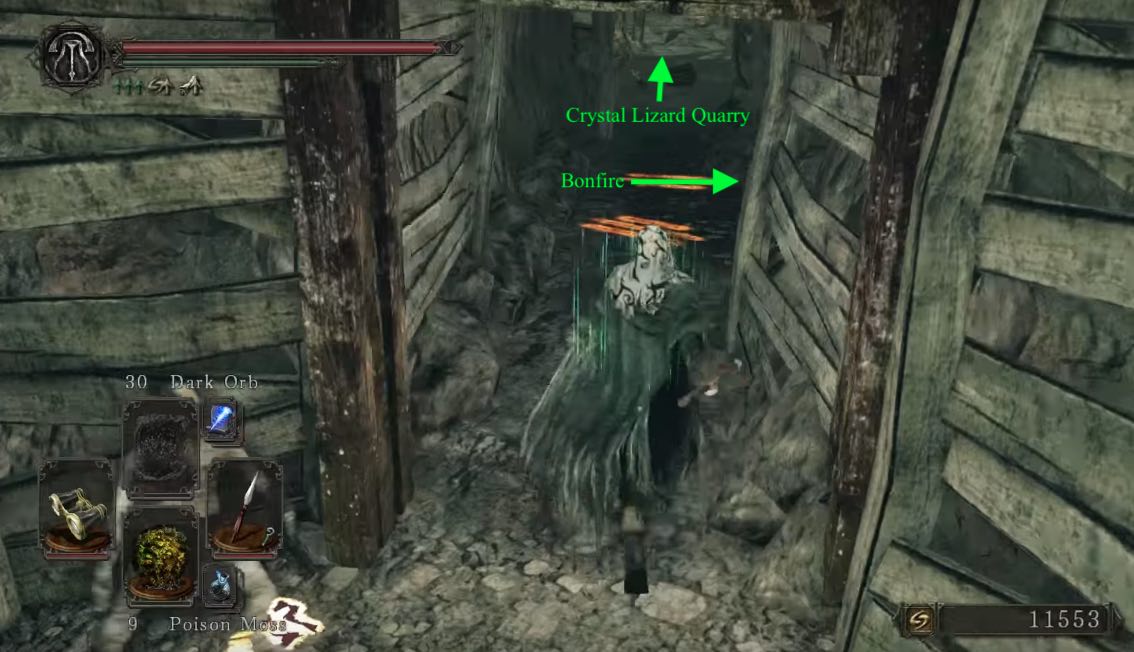 As you approach the wall a Banedigger will burst through. Instead of killing him, get around him and bait him into destroying another wall (NG+ there is a Sickle Wielding Giant Phantom hiding behind it). With the wall gone and the giant dead claim the treasure:

Near where the Giant was is a small ledge you can drop off, onto a chest containing a Poison Stone and 3x Rotten Pine Resin. The only way out is down into a gas filled tunnel with a Soul of a Nameless Soldier and a Skeleton. At the end of the tunnel is a ladder leading back to the small quarry. From here, return to the path with the Banedigger and enter the opening we ignored earlier.

Once you're through there, 4 Undead Huntsmen will converge from the sides, and a small wall raises behind you, blocking a potential escape the same way you entered. You can kite them and use the raised pathways as a bottle neck. You can also escape the area by going up the ramp, to the right, then breaking through the third set of boards. This is actually the easiest way, because than you can pick them one by one with a halberd, by sniping, and/or spells. Once all the enemies are cleared out, break the rest of the boards and claim the remaining loot of the area which includes:

One of the boards hides 2 Hollows. Another board hides a tunnel that has two exits: one lead you to a Petrified Something on a ledge overlooking a small quarry, and the other brings you to a Crystal Lizard then a pit which jumping into will lead to death. So take the lizard then head the other way.

Misty Path to the Sun

It is time to enter one of the aforementioned, poison holes. Look for the one with a lootable body at the bottom and hop in. Grab the Fading Soul from it and run down the tunnel. Near the exit is another Simpleton's Spice. The tunnel leads to another gas filled pit with two more Banediggers. Run up the nearby ramp for a breather, and dispatch of them with ranged attacks, if you desire. Be carefull though, as a Forlorn can invade here, there is will also be a regular rain of fireballs, similar to the Fire Hail attack of the Desert Sorceress. Scattered across the floor of the pit, are several lootable bodies. Be carefull when looting down there though, as there are Hollow Crawler and Skeletons waiting down there as well. 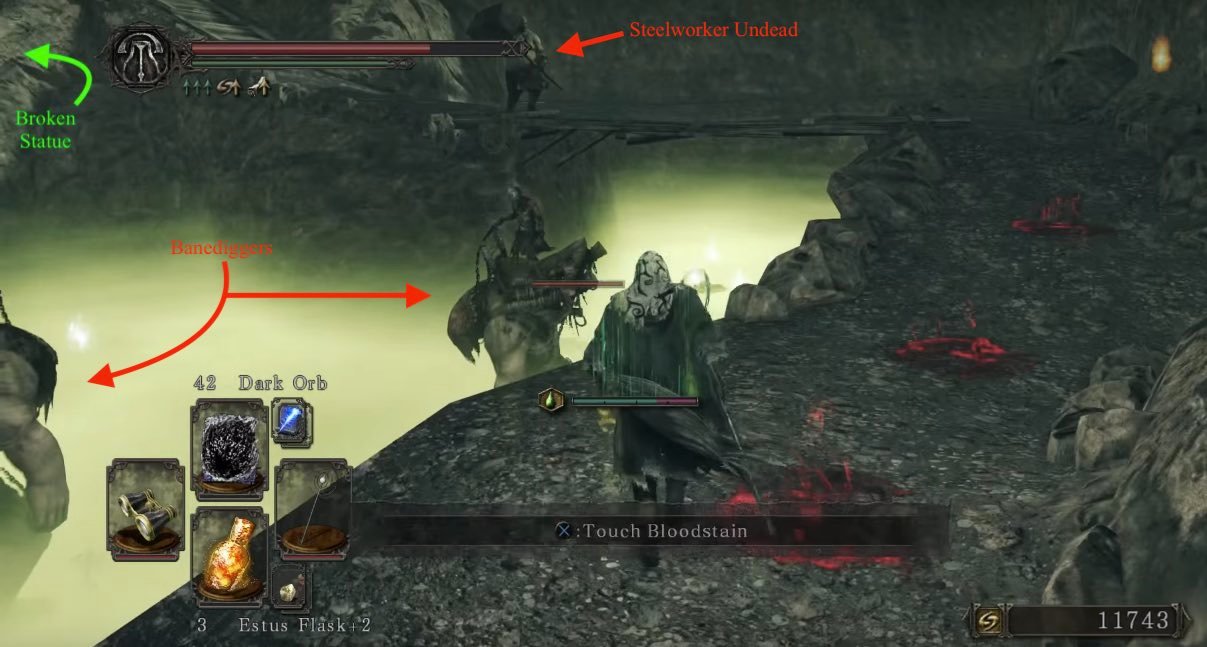 Once back up the ramp, you can either go right to go back to the quarry near the second bonfire, or continue up the path and confront the hammer wielding Steelworker Undead near the plank bridge. After he's dealt with, cross the small wooded bridge, head up the stairs and down a path to the left under a windmill blade. Continuing on into a tunnel, you'll come upon a broken statue drenched in sunlight. It is similar (exactly the same?) to the one in Dark Souls 1 and allows players to join the Heirs of the Sun covenant and learn the 'Praise the Sun' gesture. 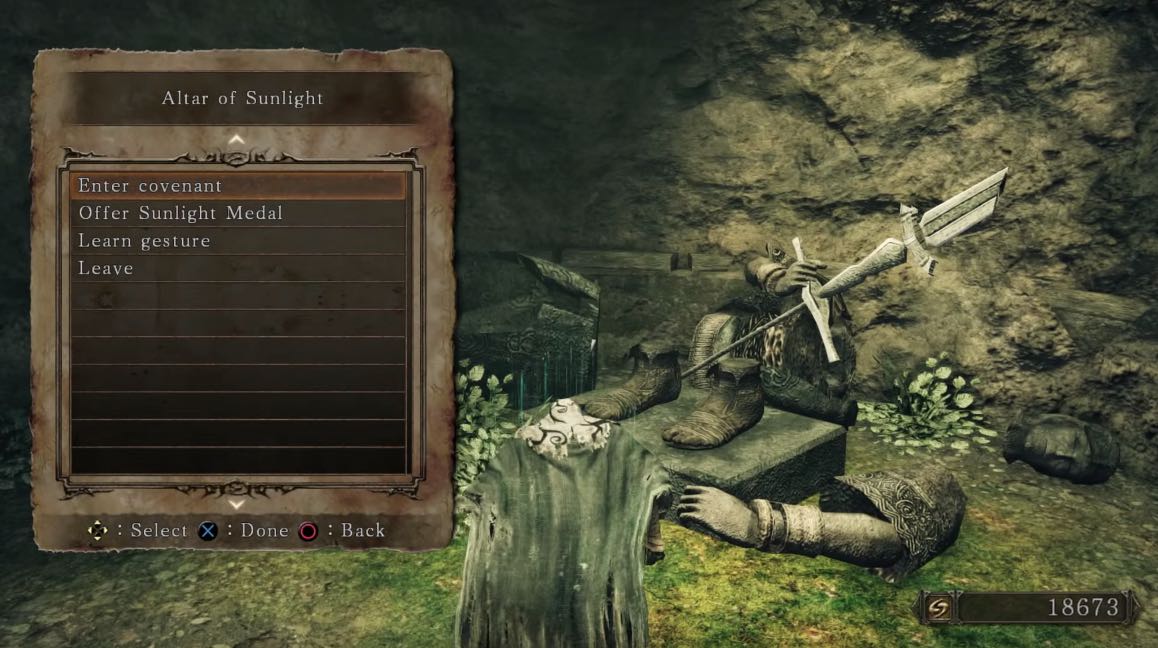 To the Earthen Peak

Returning from the Heirs of the Sun shrine, you can either go left, or right, down the ramp, then left (instead of crossing the bridge), and at the end left again. If you take the second way, be carefull of an Masked Manikin on an high ledge to the right. Both ways bring you towards the entrence to Earthen Peak. In both cases, you will be entering an area filled with poison urns, as well as an Undead Steelworker, aggroing when you enter. They will crush through the poison urns and coat themselves with it, so just let them come towards you and die from the poison, or take them out of their misery quickly. You will also notice that both entrences will be connected to a ladder, right before the doorways to Earthen Peak. If you take the upper route, be carefull of another Undead Steelworker greeting you.

If you have lightning or ranged attacks, it's very easy to farm the giants that spawn near the Mines bonfire (2nd one) for 750 each. If you go the extra step of killing the two just past the quarry after the bonfire as well, you can get 3k souls or more very quickly with little time/effort and just a few lightning spears/dark orbs/any form of ranged attacks that deal roughly 200 damage minimum.