The Lost Sinner is an enemy in Dark Souls 2.

She is located deep after the Lost Bastille and into Sinners' Rise, in a dark cell that you may illuminate if you have obtained the Bastille Key from the Belfry Gargoyles or the corpse at the edge of the broken bridge if you are playing the SotFS edition.

This is lore speculation by user: "arbitoruchiha".

The Lost Sinner is a fragment of the Witch of Izalith (insect size is small). This is clear as she was known to have attempted to recreate the first flame. This can also be heard when you have a conversation with Sweet Shalquoir after openning the shrine of winter. Although just a speculation it is possible that The Lost Sinner you are fighting with is just a host. This is due to the insect that looks like the Bed of Chaos entering her eye during the cinematic, only after it enters does she stand up tofight.

The Lost Sinner has been punishing herself in the bastille. It is possible she was punishing herself there before the town was converted to bastilles and prisons prior to the curse's arrival. This means the boss room is the oldest part of the former city. She must've built the Sinners' Rise herself to punish herself. (This may open an argument that she is not the witch of izalith but another witch got imprisoned due to trying to relight the first flame and the chaos bug was simply the result of this, this is due to the fact that the bug from dark souls might have been simply a byproduct [please read theory 2]). Her attire is built in such away that  it restrains her (possibly the boss is not at her full strength when fighting you as she is in pain from her own armor).

The Lost Sinner was a witch during the Iron King's time that tried to relight the First Flame and the result was lava and demons being born and a chaos insect just like dark souls where there was lava and demons after the attempt to relight the First Flame. As a result her guilt of killing thousands of people caused her to regret and torture herself. She might've even loved the Iron King but her mistake caused him to be a mindless demon. She tried to impress her king but this killed him. It is possible that the Lost Sinner was a Queen this as a result caused Queen Mytha to try as hard as possible to impress the King out of jealousy to the point of poisoning herself to beautify herself.

Lucatiel of Mirrah can be summoned for this encounter, provided the player exhausts her dialogue at the Tower Apart. Her summon sign is located at the bottom of the chain lift that takes the player down from the Saltfort.
In the SotFS Edition, Sellsword Luet can be summoned for this encounter. His summon sign is inside a cell just at the side of one of the exploding mummies.

You should first kill the Belfry Gargoyle and proceed past them to a bonfire and a ladder that gives you the Bastille Key. Bring a torch and use the key to open the cells before the mist, and light the oil tracks on each side. This will lighten up the room and allow you to lock on. A video of this is provided below. ALTERNATE OPTION: The sorcery spell Cast Light can also be used if you want to attempt her before the Belfry; it will light up the room enough to get Lock On from a decent range, and it will remain on if you cast it just before the smoke screen into her area.

Stick close to her body, constantly circling her. Wait for her to do a lunging thrust and after you should have time to get a hit or two in. Repeat. Take your time. Stamina management is key if you're using heavy weapons such as greatswords. If you're in a position where she is open to attack but you're low on stamina due to dodging a few of her attacks, you should just let it pass and wait for a new window. Always make sure to attack when you know your swing won't deplete your stamina completely so you can't dodge her followup. A shield with 100 physical reduction, such as the Drangleic Shield, can prove extremely helpful.

Co-op
The bossfight can be much easier if one person (either the host or phantom) has a Redeye Ring and a Drangleic shield (If you have the Gyrm Shield or Havel's Greatshield, this works great against the pyromancers in NG+ as well). The objective is to have whoever has the redeye ring to distract the boss, while the other kills the boss. This can work with NG+, the pyromancers have to be killed by the summoner. But as long as the bait has a shield up at all times, keeping their stamina up, the boss fight should be significantly easier.

Melee (no shield):
The Lost Sinner is a tricky and dangerous boss; her attacks have large swing arcs and the tracking on her thrust attack make things difficult too. The lock-on tends to not follow her fast enough and the boss sometimes retreats to walls causing the camera to act dodgy. Dodging the Lost Sinner is manageable, however, hitting her is difficult. She has few openings: After the third attack of a string (overheard and stab finishers), and side attack+overhead. The previous two attacks should be baited by staying in medium range; contriving the AI is the key to getting hit without miscalculated risks and whiffing attacks. Attacking her after one attack or the stab attack might give the player a hit or the punish will whiff, resulting in a dangerous position where the player has to roll after an attack--rolling too early in this fight should be avoided.
That aside, healing is a similar case too--heal after the overhead smash and prepare to roll if you were in medium range.

Melee (NG+):
The Lost Sinner in NG+ is identical to the first playthrough; highly aggressive and large hitboxes with hard-to-judge attacks (it is highly recommended to light the torches outside this fight with the Bastille Key) only this time, after a certain amount of her health has been taken off (roughly 1/3 - 1/2), two black-phantom pyromancers equipped with Great Fireball, Fire Orb, Flame Swathe, Lingering Flame and Forbidden Sun accompany her. With Lucatiel to help out in this fight, and it is vital that you have her summoned, it can be made quite easy; simply equip the Red Eye Ring, bought from Sweet Shalquior in Majula, and the Lost Sinner will spend the entire fight focused on you. The two pyromancers will most likely be provoked to attack you as well, but from a distance, and as long as they are kept at bay (with a 100% physical shield and high fire DEF - suggested Gyrm Greatshield) Lucatiel will handle the pyromancers with high damage, as she does not affect the Sinner greatly, and the Sinner will remain attacking you, leaving Lucatiel available to help with the singular fight against the sinner with a moderate/high amount of health, and will still be focused on you. Use any large swing opening from the Sinner to heal, and ensure that you manage your endurance well, circling and only putting the guard up when necessary. Rolling is also, like the first playthrough, vital.

Melee (Drakewing Ultra Greatsword):
The Lost Sinner can be easily staggered and damaged with the use of Drakewing Ultra Greatsword buffed with Dark Pine Resin, make sure the torches in the room have been lit, once she has swung for one to two times, land the two handed strong attack at melee, this will both stagger her and deal a high amount of damage on her (approx 900-1500), remember to dodge her attacks by rolling to the right instead of blocking.

Pyro-tank: This is a NG+ strategy that mostly revolves around being able to ignore the pyromancers. You want to max out your fire resistance by using the Hexer's set, which has the highest fire res in game, a Flame Quartz Ring (preferably +2), the Dispelling Ring, Great Magic Barrier, and (if possible) the Ring Of Giants+2. This setup should allow that you ignore the pyromancers entirely and just keep your attention on the sinner. Beware though not dodging the spells can leave you blind at moments as the explosions from the fire balls will likely block your vision. The lighting of the room may or may not be necessary as melee users will find themselves able to keep a lock on the sinner at most times but ranged might have more trouble without it. (If there are any issues with this strategy contact the user "ChildrenOfDark" and it will be adjusted accordingly)

Attacks to be wary of: 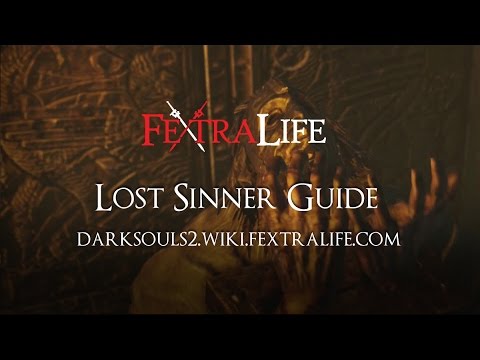